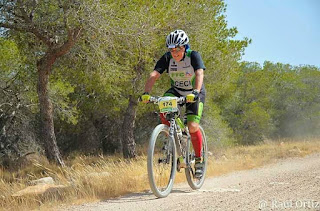 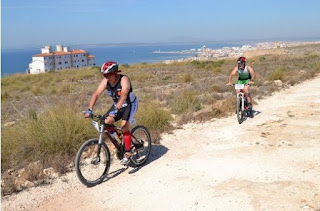 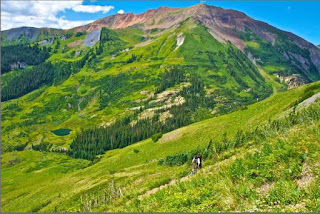 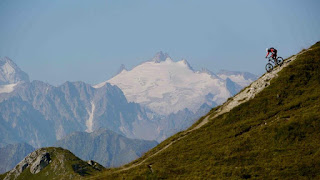 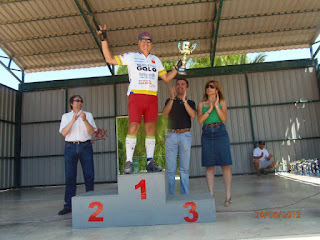 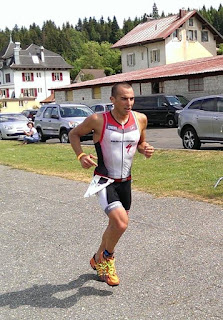 Arthur Forissier from France and Michelle Flipo from Mexico captured the 8th annual XTERRA Switzerland Championship in the Vallee de Joux this afternoon.
The win is the second in three years for Forissier on this course and the second in a row for Flipo. Forissier’s win also ended three-time XTERRA World Champ Ruben Ruzafa’s five-race win streak (Ruzafa is now won 28-of-35 XTERRA majors in his career).

The weather was unusual but the winners were not.

There were surprises, however, starting from when Nicole Walters came out of the water in front of Flipo. We know Nicole as a wonderful sportswoman and guide for challenged athletes but I had no idea she could be so quick. And it did not end with the swim. She rode equally well and those of us who expected Michelle and Brigitta to catch her never saw it happen.

Nicole held the lead into T2 and out onto the run trails. Michelle put in a very fast run to catch Nicole on the first lap and pulled away to her second XTERRA Swiss win in two years with a 3+ minute lead.

“I had no idea of my "XTERRA" shape this morning, so I started with no stress,” said Guillot-Boisset. “I thought I had a good swim exiting the water, but after seeing my split it really wasn’t. Still, I was in front of Helena, so a place I’m used to being. I built slowly on the bike, and had no idea of my position, just focusing on my sensation and myself. Starting the run, I was still 7th and thought this is not very good, but I didn't know most of the girls weren't too far away, and slowly I started to pass one, two, and get back on the podium. Finishing second is very good, I'm so happy and now fired up for next week in France with a harder race that will fit me way better.”

“I had a very good swim today,” said Riou. “In Belgium, I was almost 2' back of Carina and this time I was with her out of the water, and I was not that far from Brigitta, so that brought me lots of confidence. On the bike, I had Isabelle Klein in the front most of the time but wasn't able to catch her, but that helped me to push all the time. Starting the run, I never thought I could catch Carina or Brigitta, so passing those girls – who I have never beat in my life - was amazing and when in the last K I passed Nicole to finish on the podium, it was amazing. I’m so happy, today was my best performance ever.”

A refreshed looking Flipo looked entirely different from the mud caked woman we saw at the finish last year. “I was also surprised we could not catch Nicole. I passed her on the run and then started feeling like I had a migraine. Things were getting a bit blurry and this is usually the first sign” she said. “But it never got too bad and I just held my pace to the end.”

On the men’s side Hannes Wolpert led from the swim with a huge pack behind him. The first 5K of the mountain bike was a full-on sprint. At that point Kiwi Sam Osborne led with Ruben Ruzafa closing in, Brad Weiss 3rd and then a gang fight after them. It was exciting stuff.

There is a small loop of 2K at the far end of the bike course. It takes about three minutes to get around and return to where it started and by the time they returned Ruzafa had taken the lead. Sam stayed second just a few feet behind and Brad 3rd. Then the pack of Francois Carloni, Arthur Serrieres, Tiago Maia, Hannes Wolpert and Anthony Pannier. The Swiss favorite, Xavier Dafflon, was 6+ minutes back after a horrible swim. While Dafflon has been the fastest biker over the past two races, this course is too fast and not technical enough for him to make up such a gap. He did close it to within four-minutes by the end of the bike. Today Mother Nature’s trails were his biggest competitor.

Weiss punctured his tire on the bike while in the lead and did not finish.

Onto the second bike lap Arthur Forissier was up into 3rd behind Osborne. Ruben had a solid lead but both Sam and Arthur were within striking distance.

“I had a bad stomach last week,” Ruzafa said. “I did not get a lot of training between my last event so I was worried about these guys. I am very happy with 2nd.”

Forissier passed Osborne, then caught Ruzafa to take the lead and the footrace was on.

“I had the perfect race,” said Forissier. “It was tough, though, and on the run every time I looked back Ruben was there and getting closer.”

Indeed, the three-time XTERRA World Champ (pictured above) was not done. “I thought I would stay close in case he got tired, but he never did,” smiled Ruzafa.

In the end, the gap was just 15-seconds.

“I swam as fast as possible knowing it would be the key today, and totally killed my arms,” exclaimed Forissier. “I started the bike not afraid to be alone as I knew many athletes would start fast trying to follow Ruben and will pay for that on the second loop, and that is what happened. I was 7th after one loop and 2nd at the end of the bike. On the run, I saw Ruben not going so fast so I started as fast as possible to catch him quick but at the end I really struggled to finish. I ran out of energy, and my mind took over. I'm so happy to win again here, especially in front of Ruben. If you told me this morning I would beat Ruben I would not have believed you.”

“I rode really well and came into T2 with Francois and Sam,” said Serrieres. “I went to leave T2 and had racked my bike the wrong way, so I had to go back and make it right and by that time those guys were gone.”

It didn’t take long for Serrieres to catch and pass into 3rd with Sam Osborne just a half minute behind. Our Swiss warrior Dafflon was not taking it easy. Xavier was running hard and pulled his way into 5th overall. Carloni took 6th with Anthony Pannier an excellent 7th.

It was a fantastic pro field and a fast and furious race with the winners not decided until the last 7K of the run. The Swiss race is quite unique. The bike is fast and the strong rider who may not have great technical skills can earn a good result. It is the kind of course where there is no chance to breathe a bit and save some energy. It is a sprint from start to finish.

We were supported today by Renata Bucher who served as one of our announcers and did so in English and in German. Quite a talent as she has such great insights into what is happening.

Our first Gold event is in the books. A grand success as it was sold out with more than 450 racers and a beautiful day for racing. We head next to Xonrupt in the Vosges mountains of northern France. This is the biggest XTERRA in Europe and the longest. Many of the same players will be there and it will be interesting to see the results because the circuits are so different. You’ll see it live on XTERRA Europe Facebook next Sunday and read about it Sunday eve.

RUZAFA, POOR REMAIN ON TOP OF EURO TOUR AFTER EIGHT
Ruben Ruzafa and Brigitta Poor, the reigning XTERRA European Tour Champions, are still the leaders after eight of 14 races on this year's tour. In the men's chase Carloni retains his spot at No. 2, with Xavier Dafflon jumping over Yeray Luxem into the third position, and Rui Dolores making a big leap from the 10-spot to No. 5.

In the women's chase Poor, Erbenova, and Golsteyn remain in the 1,2,3 spots but Morgane Riou jumped from sixth to fourth position, and Wasle stayed at No. 5.

Next Up: XTERRA France, July 2