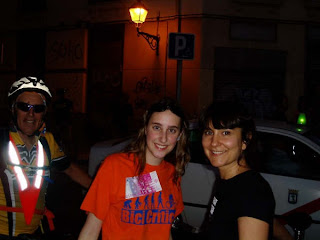 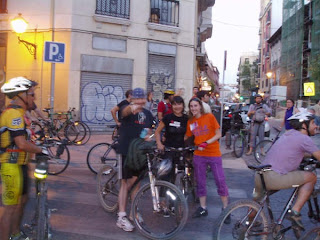 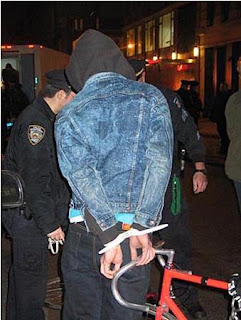 
For 18 months, the city has spared few efforts — on the street or in courts — to clamp down on a group bicycle ride in Manhattan called Critical Mass that the authorities say causes havoc by blocking traffic.

Yesterday, a state judge rejected the city's latest attempt and took the extra step of asking both sides in the dispute to calm down.

Calling the city's legal strategy against the ride "highly irregular" and "as unnecessary as it is inappropriate," Justice Michael D. Stallman of State Supreme Court in Manhattan refused to bar an environmental group and four people from taking part in it, from gathering at Union Square Park beforehand, or from announcing the rides on the group's Web site, as the city had requested.

The city had also asked the judge to issue an unusual civil declaration, without a trial, that the environmental group, Time's Up, and the four individuals had "criminal culpability" for violating laws and regulations that carried penalties of fines and imprisonment. The judge also rejected that request.

Justice Stallman concluded his 24-page decision by urging city officials and the ride participants to work out their differences.

"The social compact and the realities of living in a crowded place demand patience, mutual respect and self-restraint," Justice Stallman wrote. "Mutual de-escalation of rhetoric and conduct, and a conciliatory attitude, may help the parties and the Critical Mass riders resolve the litigation and arrive at a workable modus vivendi."

The rides take place on the last Friday of the month in about 400 cities, and have no acknowledged leadership or routes. For nearly a decade, the rides in New York attracted little notice and no arrests until the evening of Aug. 27, 2004, a few days before the Republican National Convention opened.

That night, 5,000 riders, many of them in the city to demonstrate at the convention, were met by a large number of police officers. The police arrested 264 riders on charges of parading without a permit and other violations.

Since then, officers in various disguises have infiltrated the monthly rides. Other officers in police cars have chased bicycle riders at high speed. Police helicopters have followed the riders. Two officers on motorcycles collided at last month's ride.

The judge's suggestion of a cease-fire drew mixed reactions. Norman Siegel, who represented Time's Up and the four people singled out by the city, said it was a chance to end an elephantine conflict.

"We need to get back to a time pre-August 2004 when Critical Mass was able to ride their bikes in a cooperative ride with the N.Y.P.D.," Mr. Siegel said. "This is the second time the city has attempted to stop the Critical Mass rides, once in federal court and now in state court, and both times their arguments were rejected. I would hope that the mayor and the police commissioner assume the needed leadership on this controversy and begin serious and substantial discussions to amicably resolve it."

The City Law Department declined to discuss the judge's decision and said it planned to appeal.

The Police Department's chief spokesman, Paul J. Browne, said the department had always been willing to work out an arrangement with the bicycle riders.

"The Police Department offered long ago to work with the organizers to ensure a safe ride in which police would stop vehicular traffic at intersections so bicyclists could proceed without stopping along the route, while, conversely, holding bicyclists at intersections to allow ambulances and other emergency vehicles to proceed or to alleviate bottlenecks," Mr. Browne said. "It was rejected, but the offer stands."

Justice Stallman said that since the rides had no identifiable leadership, it made little sense for the city to single out Time's Up and four people associated with the group, William DePaola, Brandon Neubauer, Leah Rorvig and Matthew Roth.

The city had demanded that they be barred from assembling in Union Square Park, the customary gathering point before each month's ride, unless someone obtained a permit. The judge said that made little sense because anyone could turn up in the park and no permit was required for "casual use."

As a practical matter, Justice Stallman wrote, the city did not explain how it could tell the difference between people who were gathering for the Critical Mass rides from anyone else who happened to be in the park. The city's assumption that anyone with a bicycle could be barred "is simply guilt by association," he wrote.

The city also argued that it was illegal for Time's Up to advertise an event for which a permit had been denied, but Justice Stallman noted that the city had never denied a permit since no one had ever sought one.

The judge said the city had wrongly argued that the Critical Mass rides were a form of parade or procession that required a permit because the riders "travel en masse." Following the city's reasoning, the judge wrote, "New Yorkers commuting over the Brooklyn Bridge on bicycles during a transit strike could be considered as 'bicycling en masse.' " Such a restriction, he said, raised constitutional concerns.

"Riding a bicycle on city streets is lawful conduct, as long as one observes the applicable traffic laws and rules," he wrote.