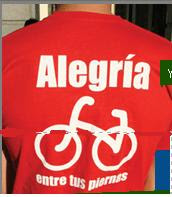 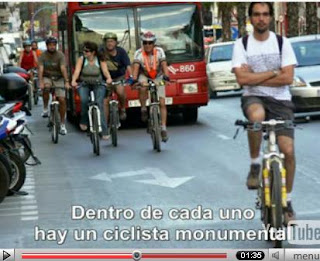 Inspired by God-knows-what, Paul Geddis and Hannah Leigh-Mackie join hundreds of other Lance Armstrong-wannabees on a spontaneous ride through the city

Although I’ve never fought in a war, starved in a refugee camp or seen my lover being pulled out of the wreckage of a car minus her legs, I can’t think of many experiences that are worse than rush hour on the Metro in Madrid. Can you imagine voluntarily packing yourself up against the armpits of hundreds of other people, all of them identically dressed and barely awake? It’s hell in neon. Oh, and by the way, the recent extension of most of the train lines, without the provision of more trains, means that it’s only going to be worse this year. How can you take a transport system seriously when it looks like it’s made out of Playmobil? The Catalans may have tiny signs that deliberately point you away from the exits into a maze of winding subterranean tunnels, but at least their underground doesn’t look like an eight-year-old’s Crayola vision of the future.


I know what you’re thinking: what’s the alternative? My guess is that you’ve been down in those tunnels for so long your mind’s getting all clogged up and icky. Think outside the box. It’s obvious: genetically mutated tame giant eagles that we can ride through the skies. Or you could just get on your bike, you lazy pig-dog.
Finally, after 20 or so years of half-arsed attempts to get cycling into the public consciousness, it seems that people are starting to pay attention. Even in Madrid where ownership of a car is seen as basic human right, the number of people ditching the tubes, at least for the jaunt to work, is growing exponentially. However, though there seem to be more Bromptons on the roads than dog shit these days, Madrid is still lagging way behind other European capitals in terms of bike usage. Just 0.1 percent of Madrid’s population regularly cycles. That’s in comparison to two percent in Paris and London and 10 percent in Berlin. And you can’t just blame the hills. It’s not San Francisco.
Surprisingly, Mayor Gallardon’s city council actually seems to be doing something positive about it. Their Plan de Movilidad Ciclista outlines proposals for “a basic cycling network”, connecting every district in the capital together via cycle paths. Building is planned at a rate of 30km of cycle paths per year until 2016, neatly coinciding with the proposed Olympics bid.


For the love of cycling
To be fair, 2016 seems a long time to wait for the luxury of being able to ride your bike without taxis cutting you up, truck drivers screaming obscenities at you and old women haranguing you when it all gets too much and you nip onto the pavements. For this reason a increasing number of city cyclists are joining in on the Bicicrítica bike rides that depart from Cibeles on the last Thursday of every month. Inspired by the now-global Critical Mass movement, Bicicrítica was started two years ago in order to . . . well nothing really. And that’s where it gets interesting.
Critical Mass doesn’t have any agenda. It’s ostensibly a spontaneous bike ride, and though the date and time may be set beforehand, everything else, up to the route itself is decided by the cyclists taking part. I know it sounds like a load of ideological gibberish, and hearing people talk about non-hierarchical structures might make you want to lash out with a bicycle pump, but the weird thing is, it works. Bicicrítica is not a protest, though various participants may support anything from the campaign for the aforementioned bike lanes, to global warming to sustainable energy. Or like me, they might just like to have the opportunity to ride their bike without a fixed destination.
Whatever your reason for taking part, one thing is clear: it’s a really enjoyable way to spend a Thursday evening. Anything up to 300 cyclists and unicyclists can amass for the wheeled procession, including any number of customised bikes. Sound systems are common, as well as inventive variations on the two-wheel concept, and there’s a real celebratory vibe in the air. It’s come a long way since the first ride in 2004, where just 20 cyclists braved the traffic and the confusion and potential wrath of the car drivers. Today, Bicicrítica is gaining popularity, with spectators who turn up to take pictures and increasing support from the very motorists that you’d suppose it would enrage, who show their support by honking in answer to the chorus of bicycle bells.
The ride itself lasts an hour or more, often ending up in a spontaneous gathering where you can get to know your fellow riders. Although rides have been known to spill out into Plaza De Las Vistillas, more often than not, you’ll find yourself in a party at the Seco Social Centre in Puente de Vallecas. This autonomous space, which has recently changed from squatted to rented status, is a heaven for bike enthusiasts. The workshop is a cavern of bike bits and tools, with recycled inner tubes and assorted nuts and bolts piled up in boxes next to the bodies of bikes which are being resuscitated, rejuvenated or stripped down for parts.


Get your hands dirty
The core group from Bicicrítica are bike enthusiasts who can diagnose and fix bikes beautifully. Through their free Wednesday-night workshops they encourage learning and active participation; you go along with your bike and a keen attitude, and they’ll get the most impractical of people getting their hands oily, dismantling and adjusting. Furthermore, their ongoing project is to get more old bikes back on the road, and more people cycling in Madrid, and they have a few different ways of doing it. They operate on a kind of barter system where you can bring along old broken bikes, or parts of bikes, if you have them, to swap for working ones; or if you haven’t got any parts, you can put in the labour. For example, maybe you go along and work for a few workshops, and you repair two: one is for the workshop, and the other you get to keep as a thank you present.

What’s refreshing about Bicicrítica is its openness. Its participants come from all walks of life, from 65-year-old retired photographers to Erasmus students, with, luckily, a few people who know how to fix a puncture. And it’s surprisingly open to dialogue. As we pull onto the roundabout at Cibeles at the back of the group, a middle-aged pedestrian enquires, “What are you protesting about?” “Nada, señor” comes the answer, “Solo es por amor a la bici.” See www.wikepedia.org for more information about Critical Mass. For more information about Bicicrítica see http://www.bicicritica.es
Publicado por cecilio benito alas en 1:24 p. m.