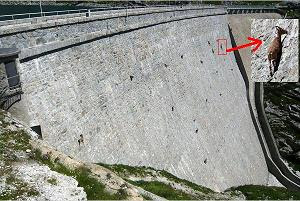 Using moves that would make any rock climber jealous, Alpine ibex cling to a near-vertical rock face of a northern Italian dam in summer 2010.

This and other pictures of the goats have been circulating online recently, particularly in emails claiming the animals are bighorn sheep on Wyoming's Buffalo Bill Dam, the rumor-quashing website Snopes reported in September.

In truth, Adriano Migliorati snapped the pictures at the 160-foot-tall (49-meter-tall) Cingino Dam (see map of the region), the Italian hiker told National Geographic News via email. The goats are attracted to the dam's salt-crusted stones, according to the U.K.-based Caters news agency. Grazing animals don't get enough of the mineral in their vegetarian diets.

It's not far-fetched, though, to think such a scene could be photographed in the United States. For example, mountain goats could scale dams in the U.S. West, according to Jeff Opperman, senior advisor for sustainable hydropower at the U.S.-based nonprofit the Nature Conservancy.

Opperman, who called the Cingino pictures "mind-boggling," pointed out a picture of a Montana mountain goat doing an "incredibly acrobatic stretching maneuver to lick salt" in the November National Geographic magazine (eighth picture in this photo gallery).

"He is wedged up this sheer vertical cliff face, almost doing a yoga pose with four hooves splayed out there," he said. "It's the same concept [with the Italian goats]—these animals can overcome what looks like impossible topography to get what they want."

Opperman cautioned, though, that the Italian dam is rare, in that its rough masonry provides gaps that act as toeholds. The more common, smooth-concrete dams—such as Buffalo Bill Dam— would give goats anywhere in the world trouble, he said.