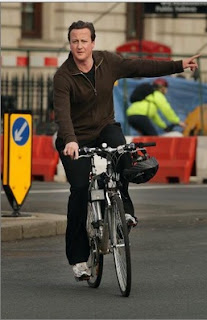 Following the death of 26-year-old cyclist Ying Tao, British Prime Minister David Cameron said he would look into a truck ban for city centers throughout the UK.


Prime Minister David Cameron, leader of Britain’s Conservative Party. Photo via Thinking About Cycling
In a meeting with the British equivalent of the Congressional Bike Caucus, Cameron promised to ask Transport Secretary Patrick McLoughlin to come up with recommendations for improving cycling safety in the country. He suggested that that list could include a ban on trucks in city centers, improved intersection design, and staggered traffic light phasing. Cameron also said he would ask officials to look into greater enforcement of rules mandating that trucks feature certain safety features.

More than half of London cyclist deaths involve trucks. Six of the seven cyclists killed in London so far this year were women hit by construction trucks.

Parliamentarian Ben Bradshaw, the cycling group’s leader, noted that Britain’s major cities “have a lamentable record both for levels of cycling and for cycle safety compared to those of our European neighbours, and it would take very little public investment to make a big improvement in the climate for cycling.”

The government is currently drafting a Cycling and Walking Investment Strategy. Currently, about 2 percent of trips in Britain are made by bike, but less than 1 percent of transportation funding goes to cycling.

Several European cities prohibit the entrance of heavy vehicles into downtown areas during peak hours, including Paris, Dublin, and Prague.

Earlier this year, London mandated that trucks over 3.5 tons need to have side guards to protect cyclists from being dragged under the wheels and extra mirrors to eliminate blind spots.

While the city maintains a peak-hour ban on the largest trucks (over 40,000 pounds) on specified city streets, Mayor Boris Johnson has rejected calls for more comprehensive regulations, like extending the ban to cover the type of truck involved in the killing of Ying Tao.