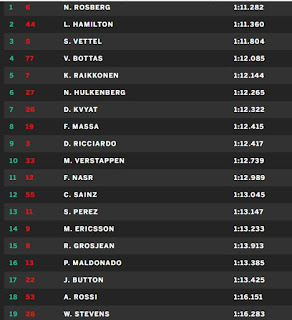 Advantage Rosberg then, as the German claims a fifth straight pole, and at a venue he triumphed at last year - and where team mate Hamilton is still desperately chasing a first victory. All the ingredients for a classic? We'll find out tomorrow - join us at 1400 local time (1600 GMT) for our free live timing and commentary from Interlagos.

As for Vettel, he admits that "Q2 gave us a bit of hope, but I saw that Nico had a few mistakes...

"I knew Q3 it would be difficult to get close. We were able to improve from yesterday, but today was the optimum for us. I think tomorrow could be interesting."
Hamilton isn't quite as talkative, but he insists Rosberg's run of five straight poles isn't a major setback.

"Today was good actually. I'm very happy with the balance and the work we did with the engineers," he explains. "Q3 I wasn’t able to find that small edge, I didn’t maximise that first sector. My main job is done this year, but of course I haven’t won here, and that’s the target."
"I'm pleased with today, it's the best place to be for tomorrow," Rosberg smiles in the post-race debrief. "Q3 really got going, the last lap was on the edge with a couple of big moments, but it worked out!

"P2 in the championship is still there to be had, and also it’s always better to end the season on a high than a low."
"Yep, not good guys," Massa sighs after being told he is eighth. "I hope tomorrow will be better."
The German is all smiles as he chats to countryman Vettel in parc ferme. Hamilton meanwhile doesn't seem to have appeared for the traditional post-qualifying photo, so Vettel and Rosberg do it on their own.
So, Rosberg claims his fifth successive pole position, becoming just the 13th man in history to do so. But will he be able to secure his second successive victory tomorrow?
Qualifying top three - 1. Rosberg, 2. Hamilton, 3. Vettel
Hulkenberg grabs fifth from Raikkonen...but the Finn reclaims the spot with his final flyer. He'll start alongside team mate Vettel after Bottas' three-place grid drop is applied.
No! Hamilton loses out by 0.078s. Rosberg is on pole for the second year in a row at Interlagos.
And Rosberg improves by two tenths of a second. Can Hamilton strike back?
Rosberg sets a new personal best through the first sector - and Hamilton can't quite match it.
15.00
The chequered flag flies, but it's all to play for at Interlagos...
Everyone out on track now.
A little under 3mins to go... brace yourselves folks! This is the big one! #F1 #BrazilGP #Quali

14.57
Bottas and Rosberg head out for their final runs.
14.56
All drivers head back to the pits. It's incredibly tight out there - 0.088s in the fight for pole, 0.188s between third and fifth...
14.55
Massa slots into P7 to big cheers from the grandstand, but the Brazilian is half a second back from team mate Bottas.
14.54
Vettel goes P3, but he's slower than he was in Q2. He also locked-up into Turn 10.
Replays show Hamilton locked-up into Turn 10 on that first effort. That might have been where he lost out.
And Hamilton can't match it. Second for the Briton, by just 0.088s.
14.52
Rosberg crosses the line in 1m 11.461s, the fastest lap of the weekend.
14.52
Once again nothing to choose between Rosberg and Hamilton in sector one...
14.51
Hulkenberg has joined the fray on used soft tyres. Everyone else who has come out, including Bottas, is on new rubber.
Hamilton has headed out to join his team mate. Game on.
14.50
Rosberg is the first man out in Q3.
Hamilton is chasing his 50th career pole position; Rosberg his fifth in a row. Can anyone stop the Mercedes men?
14.48
Green light - Q3 is underway.
Alonso shares a joke with the media about his chance to sunbathe during Q1.

"Unfortunately a lot of frustration," he admits. "We need to fix many problems on the reliability side. Next year all these problems, all these mistakes, we need to learn from them and not make them anymore. The team, Mr Arai, Ron, need to evaluate how this season was and how we will change."

13.55
A reminder then that we'll see the white-marked medium and yellow-marked soft tyres, at least in the early stages of qualifying. If rain does arrive, drivers may have to switch to the intermediates or even the wets.
13.54
We were expecting a wet qualifying ahead of the weekend, but we have clear blue skies at present. Officially the risk of rain is 30 percent, but right now things look very calm.
13.53
The home fans of course will be hoping for big performances from the two Brazilian's on the grid - Sauber's Felipe Nasr and Williams' Felipe Massa. Massa has been on pole here three times before, but he hasn't featured at the sharp end so far this weekend. Will we see him come to the fore this afternoon, or have the kerb changes that took place ahead of this year's race reduced his home field advantage?
13.50
Two drivers head into this session with grid penalties hanging over them: Red Bull's Daniel Ricciardo will drop ten places from wherever he qualifies because of an unscheduled engine change, whilst Williams' Valtteri Bottas was given a three-place grid drop for overtaking under red flags in FP2.
Ferrari's Sebastian Vettel was the only other driver to get within a second of Hamilton, but it was extremely close behind with less than 0.9s splitting Kimi Raikkonen in fourth to Carlos Sainz in 15th.
13.47
World champion Lewis Hamilton led the way in this morning's final practice session - but not by much. His Mercedes team mate Nico Rosberg - the winner here a year ago - was just 0.1s back.
We’re here at Interlagos for what promises to be an extremely tight session to decide the grid for tomorrow’s Formula 1 Grande Premio Petrobras do Brasil 2015.
13.45
Welcome to Formula1.com’s live coverage of qualifying from Sao Paulo.