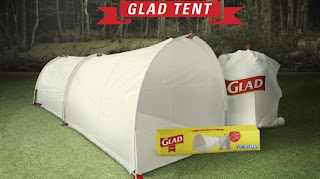 Outdoor music festivals are notorious for a lot of things, one of the biggest being the amount of garbage left behind by the concert-goers. In an effort to get music fans to clean up after themselves, while also providing them with half-decent temporary shelter, the Glad Company recently experimented with a combination tent/big garbage bag, known as the Glad Tent.

The tent, and the whole project in which it was tested, was created for Glad by the Miami-based Alma advertising agency. “For years, Glad has been a leader in innovative green solutions and focusing on two of the three R’s: Reduce (by utilizing less plastic in their bags) and Recycle (by supporting recycling programs and creating specialized products),” Alma’s Daniella Biffi told us. “But we had to figure out how to apply that last R (Reuse) to Glad’s trash bags. So the Glad Tent concept was born.”

The one-person tent is made from Glad ForceFlex garbage bags. A number of the tents were given to attendees who were camping at this year’s SXSW music festival in Austin, Texas, on the condition that they use the bags to pack up their trash when they leave. According to Biffi, the response was “overwhelmingly positive.”


It’s definitely a clever, intriguing idea, although it does raise a few questions ... Wouldn’t the people most likely to care about eliminating litter already clean up after themselves anyway? How many people would just sleep in the tent because it’s cheaper than buying a reusable one, then leave it as yet another piece of garbage? And how humid does it get inside one of those things?

In any case, a representative from Glad told us that there are no immediate plans to produce the tents commercially. 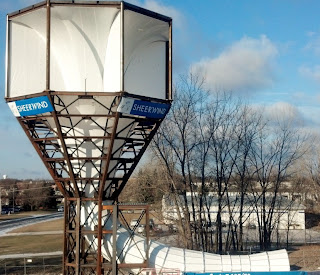 SheerWind, a wind power company from Minnesota, USA, has announced the results of tests it has carried out with its new Invelox wind power generation technology. The company says that during tests its turbine could generate six times more energy than the amount produced by traditional turbines mounted on towers. Besides, the costs of producing wind energy with Invelox are lower, delivering electricity with prices that can compete with natural gas and hydropower.

Invelox takes a novel approach to wind power generation as it doesn’t rely on high wind speeds. Instead, it captures wind at any speed, even a breeze, from a portal located above ground. The wind captured is then funneled through a duct where it will pick up speed. The resulting kinetic energy will drive the generator on the ground level. By bringing the airflow from the top of the tower, it’s possible to generate more power with smaller turbine blades, SheerWind says.

As to the sixfold output claim, as with many new technologies promising a performance breakthrough, it needs to be viewed with caution. SheerWind makes the claim based on its own comparative tests, the precise methodology of which is not entirely clear.

"We used the same turbine-generator (with a given load bank) and mounted it on a tower as is the case for traditional wind mills," SheerWind told Gizmag. "We measured wind speed and power output. Then we placed the same turbine-generator system (subjected to the same load), again we measured free stream wind speed, wind speed inside the INVELOX, and power. Then we used the power-speed relationship over 5 to 15 days (depending on the test), and calculated energy in kWh. Six hundred percent more energy was for one of the days. [...] The improvements in energy production ranged from 81 percent to 660 percent, with an average of about 314 percent more energy."

All else being equal, it would seem to be the latter category that is the most useful indicator.

Besides power performance and the fact it can operate at wind speeds as low as 1 mph, SheerWind says Invelox costs less than US$750 per kilowatt to install. It is also claimed that operating costs are significantly reduced compared to traditional turbine technology. Due to its reduced size, the system is supposedly safer for birds and other wildlife, concerns that also informed the designers of the Ewicon bladeless turbine. Finally, the system also makes it possible for multiple towers to network, that is, to get power from the same generator.
http://www.gizmag.com/invelox-wind-generator/27377/