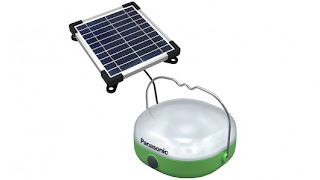 Panasonic to distribute 100,000 solar lantern/chargers to the developing world

Despite the developed world's reliance on electricity, there are still 1.32 billion people on the planet without what most have come to see as a basic necessity. To mark its 100th anniversary, Panasonic plans to give rather than receive and distribute 100,000 solar lanterns that the company has developed that can not only provide light, but also charge mobile phones and other small devices.

Currently, many people without access to electricity have to fall back on kerosene lanterns for light. Not only do these fail to provide adequate illumination, but they also produce toxic smoke, require fuel that impoverished families can’t afford, and pose a constant fire hazard.

There’s also an irony in that while Westerners debate whether to ditch their landlines for mobile phones or tablets for PCs, people in parts of Africa, Asia and South America who have never seen a telephone pole or a desktop computer can often be seen talking or surfing the internet on a mobile phone. This is a great opportunity for betterment, but, unfortunately, this short cut to the digital age needs electricity, which conventional kerosene lamps can’t provide.

There have been any number of solar lanterns developed over the years to meet this problem and Panasonic has been distributing its own to the developing world since 2006. The company doesn't give any technical details of its latest lantern, but the goal is to produce a new version based on user feedback that not only gives brighter light, but can also charge small electronic devices.

Panasonic plans to market the the new solar lantern in the second half of 2013 and a prototype will be be exhibited at the 5th Tokyo International Conference on African Development (TICAD V) in Yokohama, which runs from June 1 to 3. In addition, Panasonic will distribute 100,000 of the lanterns through government and international charitable organizations by 2018 as part of its "100 Thousand Solar Lantern Project."

The video below outlines the "100 Thousand Solar Lantern Project."