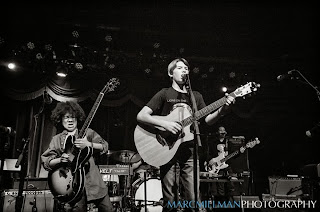 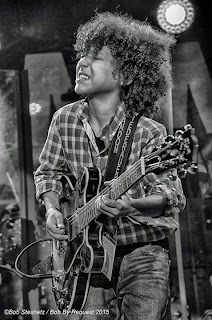 Brandon Niederauer is a 11-year-old guitarist, songwriter, and vocalist from Dix Hills, NY who plays as if he was born with the guitar in his hands. Brandon also has a very strong singing voice, proving that soul does not always come with age, and that sometimes you just have it. Brandon, known for his stinging guitar leads and his ability to jam note for note with the best guitarists around, had the opportunity to attend several Music Masters Camps

Brandon has played on Jam Cruise, at the New Orleans Jazz Fest, Tampa Bay Blues Fest, Gathering of the Vibes, The Nantucket Music fest, The Big Blues Bender, Bear Creek Music fest, Great South Bay Music fest, and many, many more. Brandon was invited to jam with New Orleans great Little Freddie King Jr. at his home last July 2013 and it was filmed for the New Orleans Times Picayune on-line, which was later written up in the print paper. He has played at BB Kings, The Famous Red Lion, and The Brooklyn Bowl in New York and Las Vegas. He has also played at Tipitina’s with George Porter Jr. and Brian Stoltz and Dumpsterphunk closing out Jazz Fest 2014, The House of Blues NOLA, The Little Gem with the great bassist Benny Turner, The Chris Owens Club, D.B.A, D-Max, Kajun’s, Rock and Bowl and BMC in New Orleans, all by invitation. After his performance of Jimi Hendrix’s “Voodoo Child” with the Lee Boys at the 2013 Crescent City Blues Festival, Brandon was asked to sit in with one of the hottest touring New Orleans band today, “The Revivalists” in NYC and had a blast rocking the house with one of his favorite contemporary rock bands in his own backyard at the Brooklyn Bowl.

A true bandleader with exceptional musical instincts, Brandon and his band BX2 has brought down the house at the International Blues Challenge—Youth Showcase in Memphis in January of 2014. BX2 was Brandon's first band with his brother Dylan on bass, Paul and Thomas Foschino on keyboards and drums and Kyle Sheehan on guitar. BX2 has also played The Great South Bay Music Fest, and opened the IBM Edge in Las Vegas. They continue to play gigs on and around Long Island.

Brandon has appeared on The Ellen DeGeneres Show on 12/4/2013. He has already appeared on Fox News 5 New Orleans, Channel 7 New York Eyewitness News, Good Morning America, and ABCTV- NOLA “News with a Twist.” Other press: The Examiner, Roll Call Magazine, The New Orleans Times Picayune, Native Orleanian, several local Long Island newspapers, and a mention in Rolling Stone Magazine in an article about Gary Clark Jr. Brandon has also played on the field before a New York Mets professional baseball game at Citifield in Flushing, NY. Brandon was named Blues Kid of the Year 2014 by Fernando Jones.

In the spring of 2014, Brandon and his brother Dylan Niederauer were introduced to Nicky Dylan Winegardner by Col. Bruce Hampton. By the end of their first jam session together, they knew they had to keep the energy going, found drummer Henry Thomas, and started a band that is now known as LIONS ON THE MOON.

Lions On The Moon’s music is an original blend of rock, pop, funk and blues. They deliver a youthful, energetic and infectious new sound that is filled with optimism, emotion and intent. The band has already created a strong repertoire of original music and played at multiple music festivals including “Gathering of The Vibes.” The Lions' success begins with a genuine love of music, a passion for performing, and a burning desire to create original art.