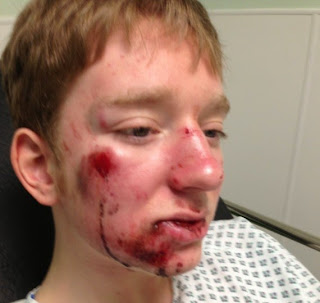 Taron Stead, 17, was cycling to through rush hour traffic in Sheffield on Friday when he was hit by a silver Ford car, sending him flying from his brand new mountain bike.

While lying on the floor with blood seeping out of his face the female passenger of the car stepped out and, according to Taron’s mother Naomi Pickard, said she wouldn’t be able to help him as her children were already late for school and the blood on his face would upset them.

She then got back in the car which immediately drive off, turning the accident into a new form of hit-and-run.

MORE: Introducing ‘men in red shorts hanging off buildings with guns pointing at them’

Naomi, 45, told the Sheffield Star: ‘I can’t believe anyone would leave an injured child at the side of the road after a crash, but it was rush hour and it would have been busy so I am hoping that witnesses come forward and help the police trace the driver.’


The junction on Crookes Valley road in Sheffield where Taron was hit off his bike Picture: Google

Staff from the nearby law school of Sheffield University eventually came to Taron’s aid, however police are now searching for the driver of the car involved in the accident.

Despite his severely battered looking face, Taron has now been discharged from hospital and is expected to make a full recovery.

He said staff at the local Halfords branch even offered to fix his bike for free when they heard what had happened to him.

Police have appealed for any witnesses of the accident to come forward.