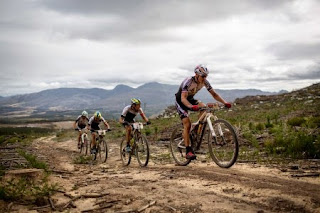 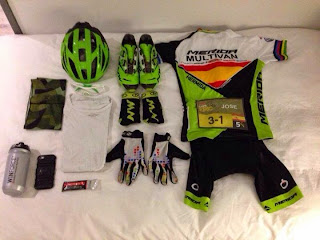 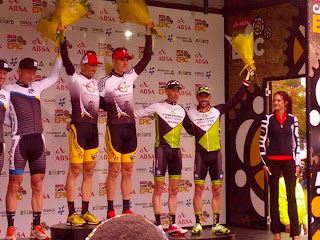 In a day of drama, Christoph Sauser Monday laid down a significant marker in his bid to become the first person to win the Absa Cape Epic five times.

The Swiss master and his Czech teammate Jaroslav Kulhavy (Investec-Songo-Specialized) showed great form on the 113km Stage 1 as they overcame a puncture to finish the day almost a minute ahead of Sauser’s great rival, Karl Platt of Germany, who is riding with Swiss strongman Urs Huber.

One of the top professionals in the field, Kargo Pro MTB's Emil Lindgren, was out of the race after crashing on a descent off the flank of the Groenlandberg and breaking his arm. He was riding with South African Brendon Davids, who will have to soldier on as an Outcast – professional riders who can continue to take part but not compete and may not influence the outcome of the race.

Bad luck struck another of the pre-race favourite teams, Topeak Ergon’s defending champion Kristian Hynek of the Czech Republic and Austrian Alban Lakata, when they had to repair two punctures and swop a wheel at a tech zone.

They managed, however, to recover and finish fourth, some four minutes behind Sauser and Kulhavy.

The day was a tough one for riders throughout the field, with some 2 800m of vertical gain through the Stage and then a steady drizzle which made surfaces slippery and occasionally treacherous.

“It’s cool being in yellow zebra jersey after the first stage,” said Sauser. “It was my first real test of the season and everything went well. My legs were good today and we were able to put the Bulls under pressure at times.”

Sauser and Kulhavy had built up a lead in the early stages of the race but picked up a sidewall puncture and lost time as they repaired it. The Bulls pair swept past and their lead grew to more than two minutes as Sauser stopped to change the entire wheel at one of the official tech zones.

“I felt under pressure today because I didn’t have a good prologue,” added Sauser. “I felt super comfortable going over Groenlandberg (the major climb of the day). I was in control.” He added, however, that “you can’t control the downhill” and that is where he picked up the puncture.

However, the Swiss/Czech pairing was strong enough to catch Platt and Huber and build another lead before the finish: “Fortunately we caught them, recovered and attacked,” said Sauser, who had notched up his 32nd Absa Cape Epic stage win. “I’m glad to be riding with Jaro again (they won the 2013 Absa Cape Epic together) … he’s a powerhouse.”

Kulhavy said Sauser had recovered strongly from his prologue difficulties. “We must do it for ‘Susi’ because this race means so much to him,” said Kulhavy.

Platt said that he was pleased to be on the podium. “Everyone was fresh and motivated and the pace on the first climb (up Groenlandberg after 20km) was really high. I was racing on the limit today … it’s going to be a really fast Epic”.

It was good day for Spaniard Jose Hermida, one of the characters of the professional circuit, and his Dutch partner Rudi van Houts (Multivan Merida), who finished third after a steady ride.

“It’s a good feeling being on the podium after last year’s bad luck (when he fell ill),” said Hermida. “We have the legs to fight for the overall, but anything can happen.”

Overnight yellow zebra jersey leaders Fabian Giger and Martin Gujan, both of Switzerland, dropped back to fifth place. Giger confessed afterwards that his decision to ride a “hardtail” – with no suspension on the back wheel – had meant for a “very rough” ride on the descents off the Groenlandberg. “Towards the end the course wasn’t so bumpy, so it got better,” he added.

The first South African pair home were USN’s Rourke Croeser and Travis Walker, who were behind the RED-E Blend team of Darren Lill and Waylon Woolcock for much of the day but managed to catch them in the last 25km and come home seventh.

Monday’s stage took orders in a loop which started and ended at Oak Valley Wine Estate in the Elgin Valley. Tuesday’s Stage 2 follows a similar format – starting and finishing at Oak Valley – but traverses different parts of the valley, and includes many sections of singletrack.