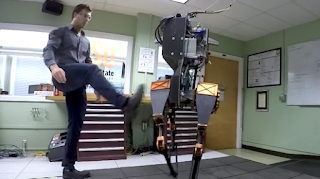 ATRIAS bipedal robot can take a beating and keep walking
ATRIAS isn't just to create a walking robot, but to create one that is better at reacting and recovering from unexpected obstacles. As you can see from the video below, ATRIAS holds its own against a barrage of dodge balls, failing only when its emergency shut-off button is accidentally struck by a ball 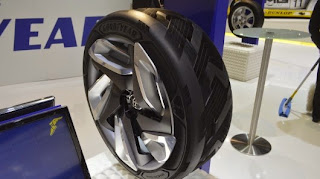 Cars are one the great transportation success stories, but they're also incredibly inefficient. Their main function is to move people from point A to point B, but in doing so they not only waste huge amounts of energy in heat, but also ignore potential sources of energy around them. Unveiled recently at the 85th Geneva International Motor Show, Goodyear's BHO3 concept tire tries to balance that equation by taking a passive device designed to reduce friction and turning it into an electrical generator.

The BHO works by turning heat and motion into electricity. It has an ultra-black texture that absorbs light and heat, and the tread is heat-absorbing. This means that the tire gets hotter both through friction while driving and while sitting in the sun, but the tricky bit is getting the the tire to turn this heat into electricity.

The BHO3 can run for a limited time after being punctured (Photo: C.C. Weiss/Gizmag.com)
To do this, the BHO3 is lined with a fishnet pattern of thermo/piezoelectric material. This net turns the heat into electrical current, and its piezoelectric properties also allow it to harvest energy from the tire as it deforms during driving. To keep the tire from overheating, there's also a cooling system in the sidewalls.

Goodyear says that the net also has a bonus feature in that it provides the tire with structural support, so if it's punctured, it can continue to travel at 80 km/h (50 mph) for 80 km (50 mi). It even improves rolling resistance.

The BHO3 is still a concept, so details such as performance or how it hooks into the car's electrical system are sketchy, but it may not be too long before you have to remember to unplug your tire before you change it. 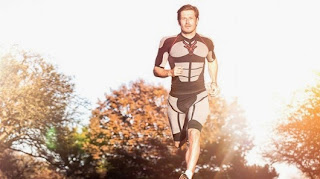 A new wearable suit called the Antelope uses muscle-targeting electrodes to increase the intensity of your gym workouts and other types of exercise. Wearable Life Science, the German startup behind the suit, says 20 minutes of exercise using the Antelope could be as effective and beneficial as three hours of activity without it.That's a bold claim to make but the Wearable Life Science pitch is an impressive one. Rather than simply recording and reporting fitness-related data, as is the case with many current wearables, the Antelope actually does something with the gathered information. The suit focuses on repeatedly stimulating different muscles depending on the type and intensity of your exercise. These pulses mimic prompts given by the brain to flex the muscles.

The smart garments are based around the same kind of electrical muscle stimulation (EMS) technology that's extensively used in physiotherapy to prod muscles into action. Usain Bolt is among the athletes known to have used EMS clothing in the past and the Antelope suit isn't the first wearable to use this approach, so it's a technology that's gaining momentum.The Antelope is thin, light and wire-free and shouldn't interfere with any kind of exercise, whether that's a boxing session in the gym or several miles of cycling. It's that portability that really makes the Antelope series of smart clothing stand out. Because everything is included in your clothing, you can take it anywhere you go, with no cumbersome dongles or wires to worry about.

A water-resistant Antelope Booster unit paired to an iOS/Android smartphone running a companion app via Bluetooth is used to control the impulses and adjust the settings during a workout. It's built-in rechargeable battery is reported sufficient to support up to 4 hours of exercising. The app, which will be available to Blackberry and Windows Phone users in the near future, also provides feedback on workouts and enables users to set their fitness goals as required.

Wearable Life Science has just won an award at an international sports business exhibition in Munich, but it's still early days for the Antelope. A Kickstarter campaign is about to get underway to bring the prototype to the production stage, which should provide more details. As of writing, pricing for the Antelope suit has not been revealed.