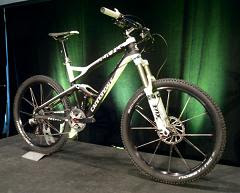 Cannondale has pulled one of their models back from history with the all-new 2011 Jekyll all-purpose mountain bike. In the process, they’ve created yet another new category in the increasingly stratified mountain bike world: Over Mountain.

Not content with the assumed compromises between climbing and descending capabilities that ‘All Mountain’ implies, Cannondale wanted to convey the Jekyll’s abilities by putting it into a category that illustrates what they claim it can do well, namely, get you over the mountain, from climbing up one side to bombing down the other, and do it all better than any other bike out there.

To do this, they’ve created an entirely new frame design, some very nice features and collaborated with Fox Racing Shox to develop the world’s first “two in one” rear shock. It’s an ingenious design the uses two completely seperate damping circuits for compression, rebound and two separate air chambers…one each for climbing and descending.

Jump in for full details…

Editor’s Note: We’re heading out to ride these things, so this post isn’t fully edited or proofread and it’ll be polished later with more pics…

Not seen since around 2002, the new Jekyll replaces the Moto as their long travel “all mountain” bike, though they won’t call it that. The new model uses Japanese-made military-spec ballistic fibers, constructed with a high-impact, hot melt resin that’s also used in baseball bat manufacturing…so it’s made to take repetitive high impacts and resist crack propagation. The 2011 Jekyll uses high modulus carbon sparingly because it’s brittle and more suited to road and XC bikes.

BallisTec Carbon Technology
Made in Japan, the ballistic carbon fiber used in the Jekyll is military spec, used in anti-ballistic equipment, and Cannondale has to sign off and account for every kilo of fiber. In fact, Cannondale’s Murray Washburn, global product marketing manager, said you could take a hammer and smack the frame hard and there would be no damage. One of their German engineers has even taken a hatchet and hit the downtime and it didn’t break the fibers. The goal with all of this was to create a carbon fiber frame that would remove the doubts and fears of those that say carbon has no place on long travel, all-mountain…er, Over-Mountain… bikes.

Rear Dropouts
Both carbon and alloy versions are hollow, either via custom layups of carbon or shaped box section aluminum.

Linkage
The alloy linkage is only 8g heavier than carbon version.

BB Shell
Aluminum shell with ISCG guides on both frames. In the carbon models, the aluminum BB is co-molded into the frame.

2011-cannondale-jekyll-ultimate-rocker-mountain-bike
Center Stiffness
Cannondale tested competing frames and found that the ones that tested stiffest in the lab didn’t necessarily feel the best on the trail; they didn’t transmit trail feel well. Peter Denk (pronounced ‘dank’), Cannondale’s direct of technology and resident carbon ninja, used this to develop the concept of Center Stiffness versus Frame Stiffness.

Second, they improved stiffness by setting the shock pivot linkage bearings as wide as possible. Then, they looked at how the bearings in the linkage were contributing to frame stiffness. With typical designs, linkage bearings are sitting on an axle that runs through the frame, and the linkages simply sit on the bearings. Denk says the problem with that design is that the linkages can move independently of each other. Their solution? Clamp the linkage onto the axle. Now, both linkage pieces are tied together and move in tandem. On the 2011 Jekyll, this is done on all three, 15mm oversized axles in the pivot area…two on the linkage and one in the bottom swingarm pivot.

Denk says this translates on the trail into a bike that requires less steering input and finessing…it’ll track better and be more predictable.

Pull Shock
The use of a pull shock eliminates stresses on the frame that are created by push shocks, makes room for a full size water bottle mount and allows for a straight seat tube, which means the geometry won’t change as your raise or lower your seatpost.

The shock is mounted near the BB, which actually equalizes forces when hitting a bump. WIth a normal push shock, not only is your weight pushing down on the bottom bracket, but the shock is, too. With the pull shock, the shock forces are pulling up on the BB, offsetting some of the forces put on it by your body weight. Also, because there’s not as much force being put on the BB area, they don’t have to overbuild the rest of the downtime just to counter shock forces.

Lastly, it sits really low for a lower center of gravity, makes the bike more maneuverable.

Dual Shock
DYAD RT2 - “World’s first true 2-shocks-in-1 SuperShock. It’s a collaboration between Fox and Cannondale.
It’s two completely distinct shocks in one body. There are two air settings, two compression settings and two rebound settings. When Cannondale initially approached Fox, they said “no way.” But C’dale’s persistence paid off. Fox agreed on the condition that they could design the damping.

Matches the rebound damping and compression damping to the different air springs, using separate circuits for both sides of the shock. The main chamber, when pushed/compressed, pushes oil into either the “Elevate” or “Flow” chamber.

When switching from Elevate to Flow mode, BB height should drop about a centimeter and seat and head angle will change by about one degree.

By using two separate air shocks and circuits, you create a bike that has a Jekyll and Hyde personality…two totally different personalities to suit the type of riding you’re doing. It eliminates the need to over inflate your shock to accommodate handling then having to release air before the descent, which becomes a real pain if your trails consist of repetitive up and down sections. Essentially, it makes you faster in both climbing and descending, and it makes it more fun to do both.

The shock’s design has a large amount of surface area to help dissipate heat, which is aided by the fact that the oil chambers are in direct contact with the outside shell of the shock rather than running through the interior shaft like most XC-oriented shocks. This reduces (likely eliminates) any change in performance during long downhill runs.

Positive air chambers are filled simultaneously via Schrader valve, but they close off from each other when the pump is removed.

SVT (Stationary Valve Technology) - runs oil directly through separate compression and rebound directly through shims between the negative and positive air springs. In Elevate mode, you’re using the larger chamber, providing 90mm of travel. In Flow mode, oil is rerouted into the smaller chamber first through DH-tuned damping circuits, and oil pressure is equalized between the two chambers. The small air chamber in the shorter chamber is good for 60mm of travel. Add them together and you get the 150mm travel for bombing down the trails.

In order to achieve this design, a couple of small compromises had to be built in. First, the lever on the bar to switch is slightly hard to push, and that’s because they had to use firm springs to control the column inside the shock that switches oil flow from the Elevate chamber to the Flow chamber. The second is that, while rebound damping is set separately for both chambers, letting you fine tune the shock’s performance in either mode, you need to be sure that both are at least partially open. Lastly, in order to get the spring rates Cannondale and Fox wanted for the bike, the shock runs higher pressure than normal and each bike gets a special shock pump. Positive air chamber pressures will be between 300 and 400 psi.

2011-cannondale-jekyll-ultimate-rocker2-mountain-bike
Progressive Linkage
The DYAD shock, like most air shocks, gets progressively firmer as it compresses. Cannondale designed a little more progression into the linkage design. It’s designed to move the shock’s shaft slower initially and speeds it up the further it moves into its travel. The result is more progressive damping and compression, keeping it from bottoming out or blowing through its full travel on major drops of huge square edged hits.

The 2011 Jekyll’s design follows in Cannondale’s tradition of System Integration by creating a frame and shock together. One of the interesting aspects of the design is their control of the rebound damping in Flow mode. When the bike drops into something big and compresses deep into its travel, the initial rebound is a bit slower to control the speed at which the bike rises back up. This prevents having the rear end bounce back too hard and buck you forward. Some riders have slowed down their rebound before big descents to accomplish this, but that results in slower rebound even over the small stuff, which can keep the shock stuck halfway in its travel over rough stuff. The dual flow rebound damping circuit and linkage ratio design solves this by keeping rebound quick over the small stuff and controlled in the big hits and drops.

In Elevate mode, they’ve eschewed a lockout in favor of a controlled but active suspension that keeps it moving quickly in the very first part of its travel. This improves traction and (Cannondale claims) conserves effort, but there’s still a bit of pedal platform built in, which can be fine tuned by adding or subtracting air pressure from the negative chamber.

Top Tube
Massively oversized at the front, splits to a “double clamp” at the seatpost to keep it stiff.

X12 142mm rear axle, but an adapter kit will be offered to run normal 135mm wheels if you’ve already got a nice set of hoops.

ISCG 03
Lighter than 05, but still lets you run a chainguide.

Fork:
Top four models will use a Fox TALAS fork to allow for matching travel adjust. Europe will get Terralogic forks, US gets the RLC. (Why? Because Euros are more into the endure style riding that has more XC-type riding, whereas the intended user in the US is likely to be more gravity oriented. They’ve gotten a lot of requests from riders wanting this bike for events like the Megavalanche and similar). Fox 15mm QR front with straight 1.5″ headtube and steerer on all.

Paint:
One colorway only in carbon, alloy models get two each, one wild, one mild.