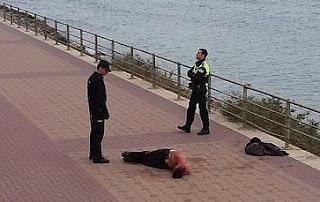 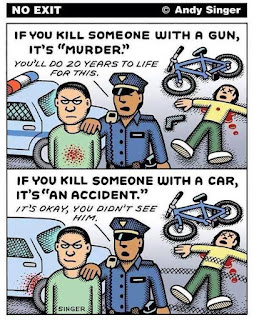 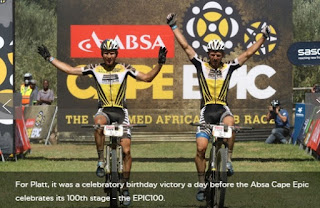 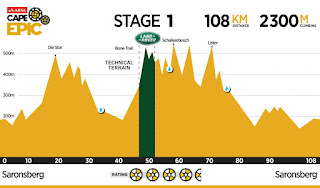 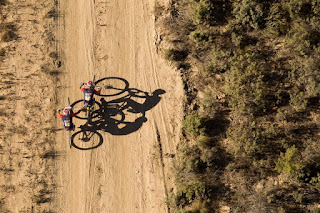 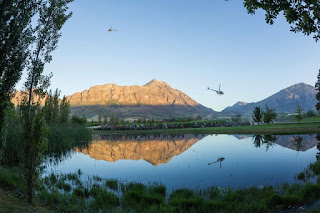 Stage 1 of the 2016 Absa Cape Epic on Monday set up a thrilling race for both the elite men’s and woman’s categories.

German Karl Platt, riding for Team Bulls with Swiss Urs Huber, was still on track for a record-equalling fifth win after winning Stage 1 by 38 seconds, but second placed Albvan Lakata of Austria and his Czech teammate Kristian Hynek signalled their intent with a strong finish.

It was evident after a day of gruelling racing in heavy dust and soaring temperatures that the race for the top step of the podium in both categories is going to be a very close one.

In the men’s race Platt and Huber, along with Cape Epic first-timers Periklis Ilias and Tiago Ferreira (Team Dolomiti Superbike), went out hard from the start, with the small bunch of four leading practically from start to finish on the 108km Tulbagh to Tulbagh stage. The tactic paid off for Platt and Huber, with the pair claiming victory in a time of 4:32.12,5.

Dolomiti Superbike finished third on the day, after a wrong turn towards the end allowed Topeak Ergon Racing’s Albana Lakata and Kristian Hynek to shoot into second place, 38,5 seconds after Team Bulls.

For Platt, it was a celebratory birthday victory a day before the Absa Cape Epic celebrates its 100th stage. “The beginning was tough in the dust, but the middle section was unbelievable,” said Platt. There was lots of great singletrack that really made the racing enjoyable. I’m happy with the win on my birthday, though I could think of a few more relaxing things to be doing – maybe a nice glass of wine instead of racing.”

Topeak Ergon Racing, after a disappointing Prologue, arrived at the Stage 1 finish looking relaxed and happy with their ride, a major shift from the post-Prologue grumbles. Lakata and Hynek both felt that the pace was too fast at the start, and so held back before striking. “Team Bulls and Dolomiti went out hard, but we didn’t panic,” said Lakata. “Our plan was always to be steady all day.”

Lakata said the heavy dust at the start of the stage was nerve-wracking. “It was very dry and dusty in the beginning. It felt very dangerous because we couldn’t see anything for a while, and at one point I was actually quite scared.”

At one point trailing the two leading teams by over two minutes, Lakata and Hynek decided to attack from water point three. “We chose to put the hammer down and gave it a lot of gas. In the end, it was a perfect ride for us and well-paced. It didn’t feel like we were in the red zone at all today and second is a very good result after the Prologue.”

Looking somewhat disappointed with a third-place finish, but still managing a smile on the podium, Greece’s Periklis Ilias and Portugal’s Tiago Ferreira made a strong statement in their debut Cape Epic. Ilias, the 2012 marathon world champion, was taken by surprise with the dusty conditions, but still managed to race hard from the start. “Today was the real Cape Epic. It was so dusty at the start that we decided to go out with the Bulls to get ahead of the dust,” said Ilias. “We worked hard and I’m happy with the result. There is no pressure on us to perform because we are new, but Tiago and I feel like there is a good pressure because we can just go out there and ride.”

In the race for the Absa African Special Jersey, USN Purefit’s Darren Lill and Waylon Woolcock made a move to the front, finishing almost nine minutes ahead of next African challengers, NAD Pro MTBs Gawie Combrinck and Nico Bell.

The USN Purefit team of had a good day on the bike overall, finishing the stage in seventh place.

Gert Heyns of Team Spur, who started the day in the red Absa African Special Jersey alongside James Reid, was forced to withdraw from the race with flu.

When De Groot and Stenerhag Health crossed the finish line first among the women in a time of 5:22.18,4 the most surprised people at Saronsberg Wine Estate were the two of them.


“We saw the helicopter, then we saw Ariane [Kleinhans] and thought maybe we can go for a stage win,” said De Groot of their passing manoeuvre on the Spur-Specialised pair of Ariane Kleinhans and Annika Langvad.

Up until that dramatic moment, in the final two kilometres of Monday’s 108km stage, the South African-Swedish pair of De Groot and Stenerhag feared for their Sasol Women’s category leader’s jersey.

“We thought we had lost it,” said De Groot. “We didn’t expect to catch up to them after we all split.”

Stage 1 was the first time in Absa Cape Epic history where the UCI-registered women’s teams started in their own batch, taking off 10 minutes after the UCI men on Monday morning. De Groot believes that it added an interesting element to the racing among the women.

“It was very nice and gave us all a fair chance to leverage off the start. Once we were caught by the men who started behind us we then rode tempo,” said De Groot, the reigning South African Marathon champion.

Langvad and Kleinhans came home in second place, losing 39.9 seconds on the day, and the pain was etched on the Swiss rider’s face.

“It was actually a very good day,” recalled Langvad, speaking for the pair while Kleinhans struggled through the day’s exertions.

“We got away on the first climb when the Grand Masters caught up with us. Up until that stage it was actually very slow. When the men caught us I think they expected us to do the work but it didn’t really happen. We knew today would be interesting with the new start and nobody had an idea how it would go.”

Langvad, provided insight to where the the tide turned for her and her teammate – their lead at one stage had grown to over four minutes.

“It was a little bit of a shame. Suddenly, in the last 20km Ariane started struggling and her pace dropped. She said she was quite tired.”

The podium today was rounded off by England’s Sally Bigham and German Adel Morath of Topeak Ergon, who arrived home 5:50.4 behind the stage winners.

The Brit called the new women’s batch “better, for sure” adding that the racing became a little different when the Grand Masters caught up with the UCI Women.

There was more good news for South Africa when Adrian Enthoven and Nic White (Whit Inc) held on to their lead in the Masters category in spite of finishing second in a sprint finish to Dutch pair John van de Wouw and Maikel Govaarts (Van de Haterd Mtb). The Dutchmen’s stage winning time was 5.06.06,5. Defending champions Bart Brerntjens and Abraao Azevedo (CST Superior Brentjens) appear to be struggling, and now lie fourth in the category more than 12 minutes back. Australians Damien Jones and Brad Clarke (Hampton Cycles) are third.

White and Enthoven are lying 20th overall after the Prologue and Stage 1.

The Mixed category was again dominated by French team Jean-Francois Bossler and Fanny Bourdon (Open-Kappius Components), who finished in 5:52.03,1, more than five minutes ahead of second-placed Gareth and Alexis Barnes of Australia (BPFteam.com).

Phillimon Sebona and Lucky Mlangeni (Exxaro/PwC) have taken a commanding lead in the race for the Exxaro special jersey, finishing in 5:24.50,3 and are now 21 minutes ahead of Jan Montshioa and Thokozani Mahlangu (Exxaro/RMB).