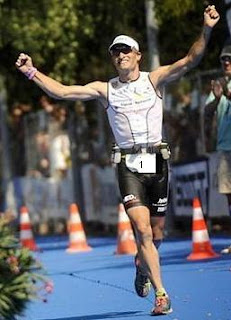 
Belgium Frederik Van Lierde wins Ironman France 2011 and just misses course record and Germany's Silvia Felt is the women's champion. U.S. women were off the pace today and finished quite far back of the leaders as Germany finishes one-three

AT THE RACE START

As the gun sounded at the swim start the final Ironman France results 2011 would play out were pretty much anybody's guess.

Of course Marcel Zamora was the favorite going in because he virtually owns the Nice course and has won the race five times.

Just the same there were some serious contenders on the pro men side who were very capable.

First of all there is home favorite François Chabaud who will be getting lots of support out on the course.


Belgian triathlete Bruno Clerbout is in fine form and could be expected to be near the front of the pack.

Perhaps the real dark horse would prove to be 26-year-old Trevor Desault.

Winning the 25-29 age-group against some of his toughest peers from around the world in Ironman Hawaii 2010 was quite an accomplishment, but the way he did it was truly remarkable.

He set a new record of 8:40 for the age-group. The one thing going against him is perhaps being a few years away from hitting his stride as far as endurance.

Still, it would be surprise to see Trevor in the top five in the Ironman France results 2011.

On the pro women side it seemed to have all the makings of U.S. Ironman stars Kim Loeffler and Heather Gollnick dominating the podium.

However Silvia Felt went into the race with a 4th place finish in Ironman South Africa 2011 and a 3rd in Ironman Mallorca 70.3.

She had the ability going into the race to be right up there with the leaders as she was in great form.

Johanna Daumas of France was also a factor off of her 4th place finish in Ironman Mallorca 70.3 2011. She may be over-matched by the Americans, but when the home crowd is on your side great things can happen.

Besides the pros it will be interesting to see how the youngest competitor, 20-year-old Solanas Yohann from France and the oldest 72-year-old Aimee Campbell of France make out in today's race.

It might be one of those days when the triathlete who can handle the heat best will come out on top as it was already 77 degreesF at 5:30 a.m.

IRONMAN FRANCE 2011-THE RACE IS ON

At the first loop in the swim all the main players among the male pros were staying in touch with Frederic Van Lierde, Romain Cadiere, and Francois Chabaud leading the way.

On the women's side it was Johanna Daumas and Jeanne Collonge leading the way. Heather Gollnick along with her compatriot Kim Loeffler off the main pack. Silvia Felt is also not with the main pack at the turn.

THE FIRST FIVE MEN OUT OF THE WATER

Marcel Perez has a super-quick transition and it with leader Frederik Van Lierde as the head out onto the bike course.

THE FIRST FIVE WOMEN OUT OF THE WATER

Heather Gollnick is 5:49 behind the leaders and Kim Loeffler is over 9 minutes back, but this is normal for both of them who are strong on the bike and run.
ON THE BIKE COURSE


You get the feeling the FREDERIK VAN LIERDE wants to establish himself as the leader early and has a short lead of 10 seconds on FRANCOIS CHABAUD but almost a 3-minute lead on the bike at the 15k mark over some of the main contenders.

At 56k in the bike FREDERIK VAN LIERDE and FRANCOIS CHABAUD have broken away and have a lead of over 5 minutes on PAUL AMEY and MARCEL PEREZ has fallen off the pace and is over 8 minutes back.

For the women it is three French triathletes in the lead. JOHANNA DAUMAS, JEANNE COLLONGE, and ALEXANDRA LOUISON are one two and three at the half-way point in the bike. Both Americans who are expected to challenge for the win are over 9 minutes back at this point.

At the 95k mark things are beginning to happen as BRUNO CLERBOUT has fallen 15 minutes off the pace. FREDERIK VAN LIERDE and FRANCOIS CHABAUD are together at the front with MARCEL ZAMORA PEREZ, the five-time winner almost 10 minutes back.

FREDERIK VAN LIERDE and FRANCOIS CHABAUD hold the lead together going into transition and now it will most likely be a matter of who can deal with the climbing temperatures out on the run course. This race is far from decided.

TOP FIVE MEN OFF THE BIKE

TOP FIVE WOMEN OFF THE BIKE

Johanna's lead is one minute over Silvia and four minutes over Britta at transition. The top American women have a lot of ground to make up in the marathon.

By the way, here are my pre-race picks from a few days ago when I built my Ironman France 2011 pre-race page.


This is a quote from that page...

Silvia Felt should be right up there with the leaders as she is in fine form with a 4th in Ironman South Africa 2011 and a 3rd in Ironman Mallorca 70.3.

Silvia is my pick to win this race.

Come on Silvia. It looks like my pick to win for the pro men has called it a day so hopefully Silvia can restore my shattered ego.lol

Here was my pick for the men on the same page....

Belgian Bruno Clerbout is actually my pick to contend for the win in Ironman France 2011.

But in my defense, I also said this....and I quote

François Chabaud is sure to be a crowd favorite and his four starts on this course will be a big help to him in 2011. He has finished as high as 3rd in IM France and that was in 2006.

At the 10k mark FRANCOIS CHABAUD is 2:32 down on FREDERIK VAN LIERDE. Paul Amey quickly falls behind by 13 minutes and suddenly this has all the makings of a two-man race developing early in the run. But runners at this level have been known to crack especially with the fast pace and in this case the heat.

PAUL AMEY might be doing well to bide his time and see what happens.


At the 5k mark of the run SILVIA FELT has taken over the lead by 1:30 over JOHANNA DAUMAS.

Just past the half marathon for the men and it looks like it is FREDERIK VAN LIERDE'S race to win or lose at this point as FRANCOIS CHABAUD is almost 4:30 behind for second.

It appears that the course record might be threatened today. The record is 8:25:29 and at his current pace FREDERIK will be closer to the 8:20 mark. However the heat can have a big impact in the late stages of an Ironman.

It seemed a strong possibility going into the race that the American women would dominate the podium, but at the end of the first loop(not half-way) in the woman's marathon, German athletes may be the ones to dominate as SILVIA FELT is first and BRITTA MARTIN also from Germany has run herself into third.

ALEXANDRA LOUISON has run into problems and is well back of the leaders out on the run course. The race for the women is certainly heating up however as there are less than 5 minutes separating the top four.

American KIM LOEFFLER is over 20 minutes back and HEATHER GOLLNICK is behind Kim.

It looks like it will soon be one-two for Germany as BRITTA MARTIN is having a strong run and is only a few seconds behind JOHANNA DAUMAS for that second spot.

Maybe Britta will become a serious contender for top spot the way she is running, but Silvia seems strong at this point as well.

MARCEL ZAMORA PEREZ is racing like the champion he is and has moved into third place, but is still 15 minutes off the lead nearing the 30k mark.

I think this is a really interesting development. TREVOR DELSAUT who won the 25-29 age-group in Kona last year with a sensational record time of 8:40 has moved into sixth place out on the marathon course.

What a great talent he could be when he reaches his mid-30's and will be at the peak of his endurance.

With just a short distance to go it looks like FREDERIK VAN LIERDE will be the Ironman France champion for 2011 and will most likely not break the course record as he slowed considerably in the late stages of the marathon.


In the race for second FRANCOIS CHABAUD has fallen back but still has a sizable lead on 5-time champion MARCEL ZAMORA PEREZ who will most likely finish in third this year.

Even in the bike it seemed that Marcel was not able to keep with the fast pace of the leaders.

SILVIA FELT my pick to win Ironman France 2011 for the women is pulling away from the rest of the field and just has to cruise on home. ironman-france-results-2011

It's beginning to look a lot like Germany will win first and second place as BRITTA MARTIN holds the second spot late in the race, but MARTINA DOGANA looks strongest of all the women and could well take over second place before the finish if she keeps up her torrid pace.

With just 6k to go in the marathon Silvia is still looking strong and now was a lead of over 9 minutes. What a great feeling that must be.

KIM LOEFFLER is in sixth spot and has a chance at a top five placing if she has a bit of a kick over the last 6k.
JOHANNA DAUMAS who was first out of the water has raced strong all day and is still hanging on to third place. HEATHER GOLLNICK is quite far back of the leaders and it just wasn't her day today.

The Ironman Triathlon results 2011 will show SILVIA FELT as the winner with her first ever Ironman victory!