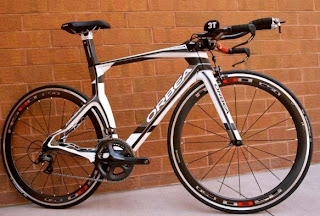 The 2013 Orbea Ordu, a giant leap forward in tri bike design for the Spanish company.

39 PHOTOS The fork had a blade extending up in front of the headtube that connects with the stem attachment system.

The aluminum cap connecting the Monolink system blends smoothly with the toptube.

The fork crown blends with the downtube.

The broad, angular downtube on the old Ordu has been replaced with an aero-shaped tube.

Seatstays tuck tightly to the rear wheel, and the kinks close to the rear hub are designed to mute road vibration.

The seatpost has a few cm on vertical adjustment range without cutting the post.

The toptube is elevated to plug the gap behind the stem. 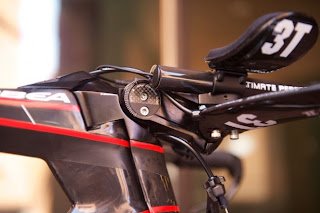 The extension can spin to adjust fit.

The stem extension is a pair of plates.

This guide is created for electronic drivetrains.

And this is the alternative stop for cable-actuated drivetrains.

The fork is the only element that is deeper than UCI restrictions allow.

The seatpost clamp is fixed with a torx bolt, not a hex bolt.

The rear derailleur wire/cable comes out behind the seatstay.

The derailleur hanger is replaceable.

The gap for the rear tire looks tight, but Orbea says it can accommodate a Zipp 808 with a 25c tire.

The non-drive side battery mount.

The underbelly of the 2013 Orbea Ordu.

TRP V-brake, adjustable and with an easy bend for the cable to round.

This region is covered with a plastic piece.

Mounts for the Di2 battery and opening for the wire.

The headset compression plug is accessible after moving the cable guide.

Internal routing opening with threads to mount the guide.

The broad, angular tubes on the old Ordu have been replaced with slender versions more closely resembling other wind tunnel-vetted frames. The standard stem has been replaced with an integrated version that blends with the frame.

It checks all the major attributes triathletes have come to expect in a sleek package, but lacks tri-specific accessory integration. Even without storage, the Ordu is ready to go toe-to-toe with the very best tri bikes.

Orbea adapted Selle Italia’s saddle clamp system called Monolink to be the centerpiece of the 2013 Ordu’s aerobar attachment system. Two straight pieces comprise the stem itself and they pivot about the Monolink. It’s similar to Felt’s Bayonet system. (Photos are in the gallery). Orbea’s new aerobar attachment setup is capable of mounting any aerobar with a standard 31.8mm round stem clamp.

Unlike Felt’s system, Orbea’s Monolink attachment system can only situate the rotating point—the Monolink system—at a single place. From this landmark, aerobars can be set even lower than the top of the headtube by rotating the stem extension pieces downward. To achieve a tall aerobar position, the extensions spin upward.

Orbea offers four effective stem lengths, 75mm, 90mm, 100mm and 110mm, measured from the center of the headtube to the center of the clamp in the longest position, not the length of the extension pieces themselves. Every bike comes with all four sizes.

When rotated upward, not only does stack height increase, but reach distance also shortens dramatically. The only limitation to this type of construction comes into play for very tall aerobar positions. With the stem pointed upward, this assembly will create short reach distances to the aerobar. They can be turned over 140-degrees, from straight up to 50-degrees below horizontal.

Shimming the elbow pads on the aerobar is another way to set the 2013 Ordu with a tall stack value. The 3T Brezza II Team Stealth aerobar allows the pads to be lifted high above the base bar. “Between all those different combinations, we think we can accommodate all the different fit possibilities out there,” said Orbea product developer Scott Warren. “We might miss somebody, but I think it’s going to be very rare.”

Riders requiring a very tall position might need to use these shims, but the rotating system and wide range of stem lengths allows the Ordu to hit the vast majority of aerobar location preferences without using a gratuitous stack of shims or spacers.

Frame geometry is the current Ordu’s biggest limitation. Designed with old school time trial geometry, the seat tube angle was slack and the headtube was short. These two features exacerbated each other. The shallow seat tube made it difficult for riders to comfortably achieve a low position, but the short headtube height demanded it.

Orbea has finally broken free from the traditional European idea of time trial geometry and created the 2013 Ordu with authentic triathlon geometry.

For students of bike fit, this frame’s stack and reach values track very closely with the Cervelo P2. Stack and reach values in this range are fairly close to the middle of the range of “aggressive” to “conservative” when compared to many other modern tri bikes. Here are the numbers:

In 2013, Orbea is offering four frame sizes that scale consistently from XS to LG, creating a similar fit profile across the line. The smallest frame will come with 650c wheels and the other three use 700c.

With only four bikes, Orbea had to get creative to cover the full range of sizes. They do not offer a humongous frame, but the size LG should be sufficient for all but the tallest riders. The only other sacrifice comes between the MD and LG frames. There is a big gap in scale between these two bikes, so some riders will rely on the ample range of adjustment in the stem system and aerobar to dial their fit.

Orbea opted for fairly traditional crank lengths on their standard bike builds. The XS and S bikes come with 170mm cranks, MD has 172.5mm and LG is spec’ed with 175mm, but the MyO component customization program Orbea offers on their website gives riders the option to swap for something shorter. ISM saddles are now also offered as an option through MyO, a very welcome addition. It’s about time triathlon bike-makers (other than Quintana Roo, who was been for a long time) start adopting anatomical-type tri saddles on standard build kits. Triathletes did years ago.

One seatpost option is available. It sets the saddle clamp at 78-degrees of effective seat tube angle, and allows a long-rail saddle to reach above 80 degrees.

Instead of smoothly integrating or shielding the front brake, the Ordu uses a standard front caliper that mounts directly to the fork. “We tested [integrated brakes] in the tunnel and studied the competition but, with feedback from out dealers and athletes, we decided that the aerodynamic benefit wasn’t worth it. The pros [to using a standard brake] outweighed the cons,” said Warren.

“We’ve already done extensive wind tunnel testing on disc brakes and we don’t find it to be a disadvantage,” said Warren. “Most of that applies to the size of the rotor: the bigger the better…Clearly road disc is something we’re studying…We’re working on a lot of stuff for the future. The front end would be easily adapted [to disc brakes].”

The rear stopper is a TRP V-brake mounted beneath the bottom bracket. Its internally routed cable pops out beneath the frame and routes into the brake with a fairly gentle bend, not a friction-creating kink many hidden rear brakes suffer from. It offers both angular brake adjustment and side-to-side pad adjustment with screws on both brake arms.

Rear dropouts are horizontal and use set screws to position the rear wheel.

The derailleur hanger is replaceable.

Orbea created two different cable guides to make the 2013 Ordu compatible with both Shimano Di2 drivetrains and cable-actuated versions. These guides mount over an opening on the top tube, just behind them stem and route the cables/wires through the frame. A cable guide on the bottom of the bike directs them to their various components. The cables are inside a Gore, which protects them from gunk and reduces friction.

The frame is compatible with BB86 press-fit bottom brackets.

A plastic cover that can screw into the frame will shield the rear brake.

The rear triangle is wide enough to accommodate a Zipp 808 Firecrest wheel with 25c tire, one of the widest possible configurations.

To adjust the preload on the 1-1/8th inch headset bearings, the stem assembly comes off the bike, revealing a typical compression plug. A 5mm and 6mm Allen wrench are the only tools needed, although the compression plug and fork will probably not need to come off the bike to fit in most travel cases.

The seatpost clamp uses a torx bolt instead of a more standard hex-head bolt. This obscure bolt prevents the wrench from slipping while tightening and stripping the bolt, but makes on-the-road adjustments difficult should anything go wrong. Many multitools do not have torx wrenches.

The frame is completely UCI legal. Instead of opting for more radical tube shapes to create a bike exclusively for triathletes (see: Specialized Shiv), the Ordu follows the Trek Speed Concept 9-series and Cervelo P5. Only a swappable part—the fork, in the case of the Ordu—uses a cord ratio of greater than 3:1, the limit imposed by cycling. The fork is has a 4:1 ratio. Warren said Orbea tested non-UCI compliant frames and didn’t find them to be faster than 3:1 bikes, so they elected to keep the tubes shallow.

For 2013, Orbea is only creating one version of this new frame with a high-end layup. They plan to offer more affordable versions with a cheaper frame layup in 2014. A complete bike built with a complete SRAM Red kit, 3T Brezza carbon aerobar and Mavic Ksyrium Elite training wheels for $6,000.

Quite simply, the Ordu doesn’t offer much in terms of storage integration. The downtube has water bottle bosses, but other than that single mount, storage is left to aftermarket accessories that must strap onto the bike.

The battery mount for electronic groupsets is beneath the non-drive chainstay closely behind the brake.

Orbea is “developing things specific to the Ordu, but they aren’t available now,” said Warren. 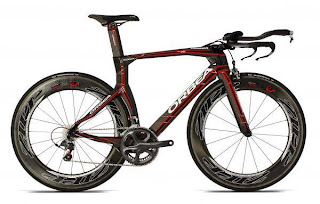