why they steal bikes ? 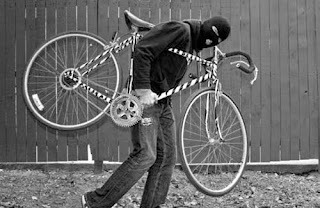 Because the risk of a crime is zero

where are the bikes sold?

amateur thieves sell the bikes in the streets for 5 to 10 cents on the dollar.

professional thieves target expensive bicycles and sell the bikes on line to maximize the selling price.

At Priceonomics, we are fascinated by stolen bicycles. Put simply, why the heck do so many bicycles get stolen? It seems like a crime with very limited financial upside for the thief, and yet bicycle theft is rampant in cities like San Francisco (where we are based). What is the economic incentive for bike thieves that underpins the pervasiveness of bike theft? Is this actually an efficient way for criminals to make money?

It seems as if stealing bikes shouldn’t be a lucrative form of criminal activity. Used bikes aren’t particularly liquid or in demand compared to other things one could steal (phones, electronics, drugs). And yet, bikes continue to get stolen so they must be generating sufficient income for thieves. What happens to these stolen bikes and how to they get turned into criminal income?

The Depth of the Problem

According the National Bike Registry and FBI, $350 million in bicycles are stolen in the United States each year. Beyond the financial cost of the crime, it’s heartbreaking to find out someone stole your bike; bikers love their bikes.

As one mom wrote in an open letter to the thief who pinched her twelve year old son’s bike:

It took CJ three weeks to finally decide on his bike. We looked at a brown bike at Costco, even brought it home to return it the next day, and a blue one at Target. But his heart was set on the green and black Trek he saw at Libertyville Cyclery. CJ knew it was more than we wanted to spend but the boy had never asked for anything before. You see, CJ had to live through his dad being unemployed for 18 months and knew money was tight. Besides, he’s just an all around thoughtful kid.

CJ didn’t ride his bike to school if there was rain in the forecast and he always locked it up. You probably noticed that it doesn’t have a scratch on it. CJ treated his bike really well and always used the kick-stand.

You should know that CJ has cried about the bike and is still very sad. He had to learn a life lesson a little earlier than I had liked - that there are some people in the world who are just plain mean. Now you know a little about my really awesome son and the story behind his green and black Trek 3500, 16-inch mountain bike.

An Economic Theory of Bike Crime

In 1968, Chicago economist Gary Becker introduced the notion that criminal behavior could be modeled using conventional economic theories. Criminals were just rational actors engaged in a careful cost-benefit analysis of whether to commit a crime. Is the potential revenue from the crime greater than the probability adjusted weight of getting caught? Or, as the antagonist in the movie The Girl Next Door puts it, “Is the juice worth the squeeze?”

Criminal activity (especially crime with a clear economic incentive like theft) could therefore be modeled like any financial decision on a risk reward curve. If you are going to take big criminal risk, you need to expect a large financial reward. Crimes that generate more reward than the probability weighted cost of getting caught create expected value for the criminal. Criminals try to find “free lunches” where they can generate revenue with little risk. The government should respond by increasing the penalty for that activity so that the market equilibrates and there is an “optimal” amount of crime.

Using this risk-return framework for crime, it begins to be clear why there is so much bike theft. For all practical purposes, stealing a bike is risk-free crime. It turns out there is a near zero chance you will be caught stealing a bike (see here) and if you are, the consequences are minimal.

There are a few great accounts of journalists getting their bikes stolen and then going on a zealous mission to try to capture bikes thieves (see here and here). In each account, they ultimately learn from local police that the penalty for stealing a bike is generally nothing.

“We make it easy for them. The DA doesn’t do tough prosecutions. All the thieves we’ve busted have got probation. They treat it like a petty crime.”

“You can’t take six people off a murder to investigate a bike theft.”

Bike thievery is essentially a risk-free crime. If you were a criminal, that might just strike your fancy. If Goldman Sachs didn’t have more profitable market inefficencies to exploit, they might be out there arbitraging stolen bikes.

What Happens to the Stolen Bikes?

Just because the risk of a crime is zero, that doesn’t mean that a criminal will engage in that crime. If that were the case, thieves would go about stealing dandelions and day-old newspapers. There has to be customer demand and a liquid market for the product in order for the criminal to turn their contraband into revenue. So, how exactly does a criminal go about converting a stolen bicycle to cash?

We decided to survey the prior literature on where stolen bikes are sold as well as consult with bike shops and experts in San Francisco to get a better picture of who steals bikes and where the stolen bikes end up.

Amateur Bike Thieves. Amateur bike thieves that sell their stolen goods at local fencing spots are typically drug addicts or down on their luck homeless.

Sgt. Joe McKolsky, bike theft specialist, for the SFPD estimates that the overwhelming majority of bike thefts are driven by drug addicts and end up being sold on the street for 5 to 10 cents on the dollar. Any bike will do, whether it’s a $50 beater or a $2,000 road bike. These thieves are amateurs just opportunistically stealing unsecured bikes to get some quick cash:

“Bikes are one of the four commodities of the street — cash, drugs, sex, and bikes… You can virtually exchange one for another.”

In San Francisco, these amateur stolen bikes end up on the streets at the intersection of 7th Street and Market Street in front of the Carl’s Jr restaurant. We chatted with Brian Smith, co-owner of HuckleBerry Bicycles which is located across the street from this fencing joint. He confirmed it’s not uncommon for people to come into the shop having just purchased a $50 bike across the street or with obviously stolen bikes.

Professional Thieves. On the other end of the spectrum are professional bike thieves. Instead of opportunistically targeting poorly locked bicycles, these thieves target expensive bicycles. They have the tools that can cut through u-locks and aim to resell stolen bikes at a price near their “fair market value.” These thieves acquire the bicycles from the streets, but then resell them on online markets to maximize the selling price.

We asked Aubrey Hoermann, owner of used bicycle shop Refried Cycles in the Mission about professional bike thieves and where they sell there merchandise:

“It has to end up somewhere where you can sell it in another city. My feeling is that people steal enough bikes to make it worth to take a trip somewhere like LA and then sell it there on Craigslist. If you have about 10 stolen bikes, it’s probably worth the trip.”

Another bike shop proprietor who asked not to be named added:

“Most of these guys are drug addicts, but a lot of them are professionals. You can cut through a u-lock in a minute and a half with the right tools. Steal three bikes and sell them in LA for $1500 a piece you’re making money.”

These thieves essentially are maximizing their revenue per van trip to a market in which they can sell the bicycle. In the past they might be able to resell it locally, but according to Aubrey, this opportunity is fading:

You can’t just steal a bike and sell it on Craigslist in San Francisco anymore. It’s too well known that’s where it would be and it’s too much work to change it to make it look different. I used to be a bike messenger and if your bike was stolen you’d go check at 7th and Market. Now that’s too well known to just sell a bike there.

Increasingly when a bicycle is stolen, the victims know where to check locally (Craigslist, 7th and Market, the Oakland Flea Market) so that makes it hard to sell the bikes there. Because bikes aren’t even that popular in the first place, it’s just not worth the effort to customize and disguise them for local sale.

Because of this dynamic, Aubrey concludes that professional bike theft is replacing amateur theft as the predominant form of bike theft. While the police may not penalize bicycle thieves, it’s becoming easier for the person whose bike was stolen to investigate the bike theft themselves. This is making it harder to the amateur thief to casually flip a stolen bike.

Is There at Keyser Söze of the Bike Underworld?

Bike theft is rampant and increasingly the province of professionals. Is there any evidence that a “criminal mastermind” exists behind this network where bikes are stolen in one city, transported to another and then resold? Ultimately, there is no evidence that a bike kingpin exists.

The largest bike theft arrests ever recorded are rather mundane actually. In San Francisco, recently a local teen was arrested with hundreds of stolen bikes found in his storage locker. Did these bicycles end up in some exotic fencing ring? Nope, they were being resold at an Oakland flea market.

In Toronto, a mentally imbalanced bike shop owner was found hoarding 2,700 stolen bikes. Mostly, he was just letting them rust.

Criminal masterminds have to value their time and resources, and bike theft isn’t really that profitable. The transportation costs and low value density ratio of the product likely kill the economics of the stolen bike trade. The bike shop proprietor we interviewed that requested anonymity concluded:

You’d be in the prostitution or drugs business if you were running a criminal ring to make money. There just isn’t that much money in bikes. These people who steal bikes are professionals but small time operators. Or, they’re just assholes.

Ultimately, that’s the point everyone seems to agree on - bike thieves are assholes. For everything else, there is little consensus and hard evidence. However, some things are clear and explain a lot of the bike theft that occurs.

It’s dead simple to steal a bike and the consequences are near zero. You can resell stolen bikes. If you want to get a good price for a stolen bicycle, it requires a decent amount of work. That amount of work is what limits the bike theft trade from really flourishing. Criminal masterminds have an opportunity cost for their time, they can’t be messing around lugging heavy pieces of metal and rubber that are only in limited demand.

So, if your bike ever gets stolen, you can at least take solace in the fact that the illicit bike trade isn’t a very easy way to make a lot of money. That probably won’t make you feel any better though.

in this blog, mostly in Spanish