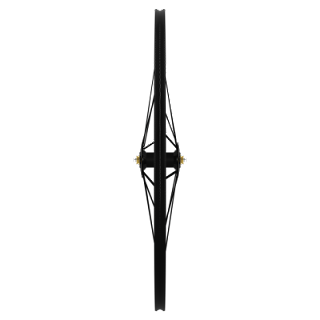 How do you bring extremes closer together to redefine the characteristics completely? Nothing could be easier!

We are consistently looking for the optimum. And when we get this certain feeling, that something could be better, we improve it. That's why we redefined our benchmark. So we focussed, we worked meticolously, we puzzled and we filed - on the design, the weight and the aerodynamics. The result: Even more control while riding and even better charateristics on the brake than ever. So we pushed the limits once again and created a wheel, that is really impressive: It is the best MEILENSTEIN, we have ever built. 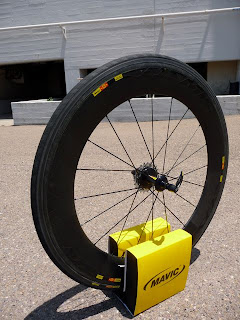 The Mavic CXR80 may have shown that complete rim-tire integration is the next evolution in wheels design. Photo: Aaron Hersh 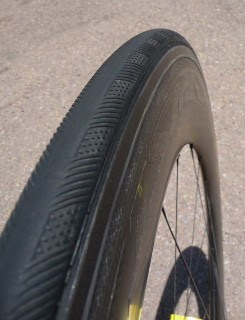 The Next Evolution Of Aero Wheels

Blending the tire and wheel seamlessly has proven to be more aerodynamic and will be a prevalent feature in future aero wheel design.

The sections of an object with the most impact on its aerodynamic characteristics are the leading and trailing edges—the first and last parts the wind touches. In the case of bike wheels, the tire is both. Rims have gotten most of the attention, rightfully so, but many aero wheel designers have found that tires are exceptionally important part of wheel aerodynamics. Mavic, a company that had been left behind in terms of aerodynamic performance, is proving just how important tires really are.

Hed Cycling and Zipp enjoyed a stranglehold on aero wheel technology for many years because of a patent on rim shape shared by the two companies. This exclusive right to a key piece of aerodynamic technology allowed them to dominate aero testing—and the Kona wheel count—but that patent expired in 2007, forcing both brands to emerge from the security of that protected rim shape and innovate beyond that benchmark. And they did so successfully. Both companies created aero wheels significantly faster than previous generations, vetted by multiple wind tunnel tests conducted by many different people and companies.

The key to this next evolution in aero rim technology was blending the tire and rim.

The patent that expired in 2007 covered the “toroidal” rim shape. A cross-sectional slice of these rims is football-shaped—widest at the middle and narrower at the spoke bed and brake track. The broad midsection helps air pass around a rim with less flow separation—a fancy term for allowing air to flutter off the rim rather than passing straight over the surface—than many V-shaped rim designs. This reduces pressure drag, the dominant type of resistance a cyclist has to overcome.

But these toroidal designs were flawed. Engineers were trying to achieve a toroidal shape, but in reality they created something closer to a figure-8 because of the tire.

That narrow brake track was substantially thinner than most tires, so if you took a slice of a toroidal wheel with a tire mounted, you would have a football-shaped rim with a waist above it, then a broad circular tire. Only the deep section of these wheels was truly toroidal; with a tire, these wheels were in fact shaped like an “8.”

Hed Cycling and Zipp both used a similar tactic to solve this shortcoming: they made wider rims. The old standard width was 19mm. The current Hed Stinger 9 is 28mm across at the brake track. Zipp’s 404 is broader than 25mm at the tire bed.

The idea behind widening the brake track is simple. The tire itself is 23mm across at its broadest point. In order to create a continuous, smooth shape reminiscent of a football with both the rim and tire, the rim must be wider than the tire so the rubber doesn’t protrude past the sides of the wheel. Designing the rim around the tire worked. This newest generation of wheels is substantially more aerodynamic than the pre-2007 wheels.

This change in design provided a very clear lesson about aero wheel design: Integrating the tire and rim is crucial.

There are a bevy of genuinely fast aero wheels now—Bontrager, Enve, Shimano to name a few—that are designed around the principle of broadening the rim to create a toroidal-like shape of the wheel and tire in combination, and Mavic is taking this concept to the next level.

The historic French company created the concept of building wheels as a complete system—rim, spokes and hubs—in 1994. Before then, wheels were assembled from their individual components. This idea revolutionized cycling wheels, and now practically every bike rolls on pre-built wheels.

The French company announced their intentions to do the same with tires in 2010. At first, the change wasn’t that big. Instead of build wheels and tires separately, high-end Mavic road wheels now came with tires. The idea was valid, but it was being applied in the wrong arena.

Mavic, a traditional company rooted in road cycling, was slow to create wheels specifically for aerodynamic performance. They finally did so with the CC80, a deep wheel created for a sponsored pro cycling team that demanded the product. It’s basically a “me-too” product, not substantially different from offerings from many other brands. It did, however, enter Mavic into the arena where their concept of wheel-tire systems really makes sense.

Enter the CXR80, another 80mm-deep wheel but unlike the CC80, this new design pushes aerodynamic wheels performance to another level by integrating the rim and tire more dramatically than any other wheel. The tire created specifically for the CXR80 rim creates a nearly continuous surface from spoke bed to pavement when used with a cleaver aero accessory Mavic designed to completely fill the wheel-tire gap.

Like a few other companies, Mavic designed the shape of a tire to complement their wheel. Zipp and Felt shaped the casing and rubber of their tires to create a more aerodynamic profile when mounted to their wheels. Bontrager uses little wings on the side of their R4 Aero tire to minimize the gap that forms between the tire and rim. Mavic used the same concepts but took it to another level. The CXR80 rim shape takes very clear cues from the aero rims created by more established aero brands. It’s wide at the brake track and narrow around the middle, but the tire itself blends almost seamlessly with the rim. A rubber hoop snaps into notches positioned just above the brake track on both sides that fills the gap between the tire’s widest point and the rim, completely eliminating the space. The tire itself is also sculpted to continue the rim shape, finishing the aerodynamic shape of the tire and rim. Mavic also added texture to the shoulders of the tire, which the company says further reduces drag.

To prove their concept, Mavic boldly invited journalists to bring competing wheels to the Low Speed Wind Tunnel in San Diego to run against the Mavic. The results are very compelling.

Instead of standardizing tires in this test, every set used a different pair. The two wheels tested with aero tires designed specifically for the wheelsets beat all the others.

Not only did Mavic end up winning their test (cynics will point out that the company that pays always wins), but Bontrager’s Aeolus D3 7 wheels were the clear second place winner, ahead of credible wheels from Zipp and Hed tested with tires designed independently of the rims. Wheels were tested on a Cervélo P5 without rider at 2.5 degree increments spreading from -20 degrees of yaw to 20 degrees.

Tire width can have a major impact on wheel aerodynamics, and since every wheel was tested with a different set of rubber, the sheer size of a tire in addition to its shape can impact wheel aerodynamics. Using a digital caliper, I measured the width of the tires used on the four wheelsets that performed best. The Mavic CXR80 tires were 21.8mm across at the widest point, equivalent to the Vittoria Triathlon EVOs used on a pair of Hed Stinger 7s. The Zipp 808s had slightly wider tires, measuring 22.6mm across. The Bontragers were tested with R4 Aero tires created by Bontrager, and this pair was easily the broadest at 23.4mm and still generated impressive drag numbers.

The most important takeaway from this test isn’t necessarily the ranking of the wheels, it’s the importance of wheel-tire integration on aerodynamic performance. Just as Hed and Zipp moved the entire aero wheel industry by creating wide rims that blended existing tires more effectively than others, Mavic may have done the same by showing that simple tire integration isn’t enough. Dramatic measures to fill the wheel-tire gap may become a necessity of aero wheel design to win wind tunnel tests. The CXR80 does that extremely well.

In order to compete, every aero wheel maker is going to have to produce a tire to complement their wheels or design their wheels backward starting with an existing tire. Road-worthiness will be tested as integration becomes more and more complete. Like brakes on triathlon bikes, some athletes will still choose usability over fractional aerodynamic improvement, but more wheel makers are likely to respond by pairing tires and wheels and working to blend them even more seamlessly. 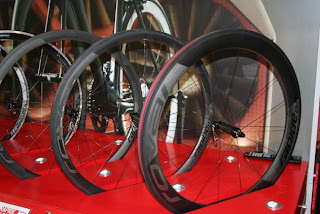 Roval has offered full carbon mountain wheelsets for the past few years, but full carbon road wheels have been on hiatus since Specialized discontinued the Roval Carbon Star wheels. Specialized’s new carbon offerings, however, are very forward thinking. Most of the new Roval Rapide CLX wheelsets incorporate a new carbon layup aimed at dissipating heat better than the company’s previous offerings.

Specialized will offer the Roval CLX 40 Disc stock on the S-Works Roubaix (that’s right, a disc brake-equipped Roubaix is on the way!) and Crux Disc models, the S-Works Tarmacs, Roubaixs and other models will feature the standard rim brake version, the CLX 40. Both wheelsets will also be available aftermarket, likely this fall.

The rear hub on the CLX Disc has 135mm spacing, making it compatible with the existing Specialized Crux disc bikes as well as most disc ‘cross bikes on the market. The disc hubs use Shimano’s Centerlock rotor mount system to save as much weight as possible.

To counteract the forces of disc brakes, the CLX 40 Disc uses a two-cross lacing pattern both front and rear with 24 spokes in the front and 28 out back. The non-disc CLX 40 uses 18 spokes in the front and 24 in the rear. The rims of the CLX 40 Disc and non-disc are on the wide end of the clincher market, measuring at 26.2mm at the tire bead, making them virtually the same width as Zipp’s 404 Firecrest clinchers.

According to Roval wheel engineer Matt Urquart, while the disc and non-disc rims look astonishingly similar, the disc wheels do not have the heat dissipating treatment that would allow them to function with rim brake bikes.

While maybe not as enticing as the CLX 40 Disc, the CLX 60 offers an even wider and deeper rim than its new cousin. Like the CLX 40, the 60 uses Roval-branded hubs with DT Swiss internals and ceramic cartridge bearings. As you might expect, the 60 has a 60mm rim depth and a surprisingly wide rim that measures a porky 27.3mm. Specialized won’t offer the CLX 60 in a disc brake version.