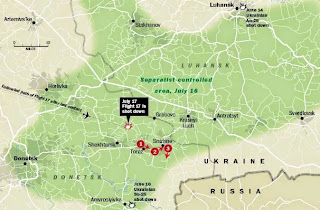 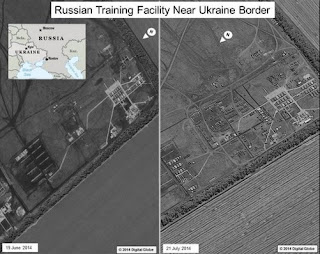 Images released by the Office of the Director of National Intelligence claim to show the movements of a surface-to-air missile launcher, and evidence of a buildup of Russian military activity in Ukraine.
U.S. intelligence officials released these satellite images of a Russian military base near Rostov, showing an increase in vehicular activity since June. They identified the base as being a main conduit of Russian support to separatists in Ukraine. The Office of the Director of National Intelligence
By Greg Miller July 22 at 7:24 PM
The Obama administration, detailing what it called evidence of Russian complicity in the downing of a Malaysian airliner, on Tuesday released satellite images and other sensitive intelligence that officials say show Moscow had trained and equipped rebels in Ukraine responsible for the attack.

Senior U.S. intelligence officials cited sensors that traced the path of the missile, shrapnel markings on the downed aircraft, voiceprint analysis of separatists claiming credit for the strike, and a flood of photos and other data from social-media sites.

The officials also for the first time identified a sprawling Russian military installation near the city of Rostov as the main conduit of Russian support to separatists in Ukraine, describing it as a hub of training and weapons that has expanded dramatically over the past month. The officials said that tanks, rocket launchers and other arms have continued to flow into Ukraine even after the downing of Malaysia Airlines Flight 17, which killed 298 civilians.

Analysts at the CIA and other U.S. intelligence agencies are continuing to examine information about the crash, but the officials said the intelligence assembled in the five days since the attack points overwhelmingly to Russian-backed separatists in territory they control in eastern Ukraine.

The senior intelligence officials said they have ruled out the possibility that Ukrainian forces were responsible for the attack.


Images claim show the movements of a surface-to-air missile launcher and build up of Russian military activity across the border.
“That is not a plausible scenario,” said one senior U.S. official, who noted that American intelligence agencies have confirmed that Ukraine had no antiaircraft missile system within range of the Malaysian flight at the time it was struck.


The official was one of three senior U.S. intelligence officials who spoke on the condition of anonymity during a briefing arranged for reporters in Washington to provide more detailed information on the assertions made by administration officials in recent days, as well as to rebut Russian claims.

“We are seeing a full-court press by the Russian government to instruct affiliated or friendly elements to manipulate the media environment to spread Russia’s version of the story,” the official said. “What this looks like again is a classic case of blaming the victims.”

The U.S. intelligence officials, who included experts on Russia’s military and its relationship with separatists in Ukraine, said they do not know the identities or even the nationalities — whether Russian or possibly defectors from Ukraine’s military — of those who launched the missile from an SA-11 surface-to-air battery.

Nor have U.S. spy agencies reached any conclusions on the motive for the attack, except to say that the reaction among separatists recorded on social media indicates they believed they were targeting a Ukrainian military transport plane.


In part, the officials said, that may have been because the rebels operating the missile battery were poorly trained and did not have access to other radar systems and equipment that ordinarily accompany an SA-11 system and are designed to help distinguish military targets from civilian planes.

U.S. officials said earlier that they had seen “indications” of advanced antiaircraft systems being moved into eastern Ukraine from Russia and being removed after the jet was shot down.

The senior intelligence officials said spy agencies were not aware that an SA-11 system was in eastern Ukraine until the attack had happened. They declined to answer questions about whether warnings about the Russian military buildup over the past month had been shared with international aviation authorities.

The officials also declined to provide more details on the satellites and other sophisticated sensors that enabled them to trace the path of the missile, citing concerns about compromising secret U.S. capabilities.

Intelligence effort
Still, the administration released information that had been kept secret until Tuesday, providing the most explicit illustration to date of the extent to which it has mobilized intelligence resources to track the conflict in Ukraine.

In particular, the Office of the Director of National Intelligence released images taken of the Russian military facility near Rostov over the span of a month, before-and-after slides that the officials said showed a substantial buildup after Russia had pledged to pull back from Ukraine.


Russia has gone to significant lengths to disguise that flow of weaponry, the officials said, by delivering equipment that matches the inventory of Ukraine’s military. In some cases, the officials said, Russia appears to have pulled aging and inactive tanks out of storage because shipping newer ones would make it obvious that Russian arms were flowing into Ukraine.

“We think they’re continuing to do it” in the aftermath of the strike on the Malaysian aircraft, one of the intelligence officials said.

Russia appears to have “felt compelled to increase the level of support” for separatists, the official said,because Ukraine’s military has become increasingly effective against the rebels, retaking the city of Slovyansk.

In recent days, the Ukrainian government has posted online what it has described as incriminating communications among rebel leaders and units, calls and radio transmissions apparently intercepted by Kiev.

The U.S. officials said they have confirmed the authenticity of some of those recordings, including one in which the self-proclaimed defense minister of the Donetsk People’s Republic, Igor Strelkov, claimed responsibility for shooting down a military transport plane at the time the Malaysian aircraft was struck.

Analysis comparing that audio clip to other confirmed recordings of Strelkov’s voice “confirmed these were authentic conversations,” one of the officials said.

Other aircraft shot down
The officials noted that separatists had shot down aircraft on about a dozen other occasions over the past month — mostly helicopters and Ukraine military planes flying far below the 33,000-foot altitude at which the Malaysian flight was hit. Ukraine’s military, by contrast, is focused on the ground threat posed by separatists and has yet to fire on an aircraft, the officials said.


U.S. intelligence analysts have examined photos from the crash site and identified damage consistent with that caused by an SA-11 missile, the officials said, but they stressed that such analysis is preliminary.

The briefing also revealed the extent to which U.S. spy agencies are relying on Twitter, Facebook and other social-media sites to monitor the conflict.

The officials cited verbal exchanges among rebels posted on YouTube indicating separatists arriving at the scene of the wreckage were surprised to discover civilians.

“If you listen to YouTube you get that: ‘We’re finding civilians,’ ” one of the intelligence officials said. Partly for that reason, the official said, “the most plausible explanation to me is [it was] a mistake.”