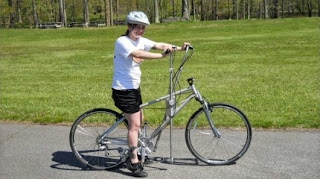 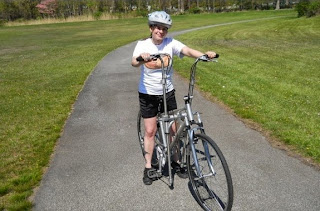 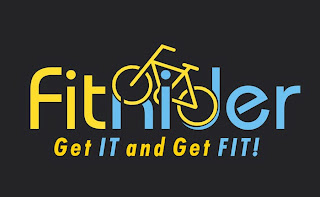 FitRider bike puts those lazy arms to use

Much as cycling is a good source of exercise for the lower body and the core, it admittedly doesn't do much for the upper body. We've seen a number of attempts to address this shortcoming, mostly in the form of bikes that are pedaled with both the legs and the arms. The FitRider takes a somewhat different approach, looking somewhat like a cross between a regular bicycle and a NordicTrack.

Instead of traditional handlebars, the FitRider has two vertical ski pole-like levers that extend down to the pedals, and which pivot in the middle where they meet the aluminum frame. Each one is connected to its respective pedal via a steel rod, allowing arm power applied to the levers to augment the leg power that's applied to the pedals.

If the rider's arms get tired, they can disconnect those rods and secure them to an anchoring point on the frame, locking the levers in a more traditional non-pivoting configuration. They can still turn from side to side, however, to facilitate steering.

In its current form, the FitRider also features a suspension fork, 700C wheels, and a 14-speed drivetrain.

Its creators, Bill Capek and Abraham Mathew, are now in the process of raising production funds on Kickstarter. A pledge of US$1,800 will get you one, when and if they're ready to go. The estimated retail price is $2,199.