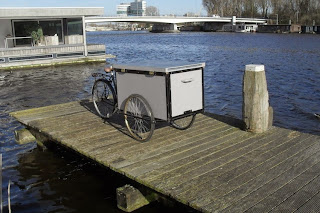 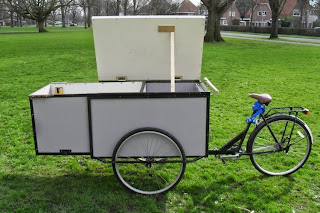 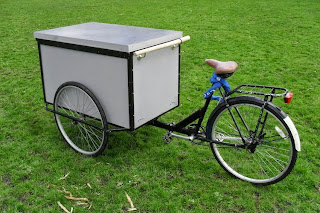 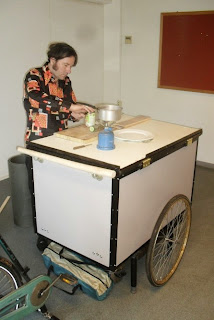 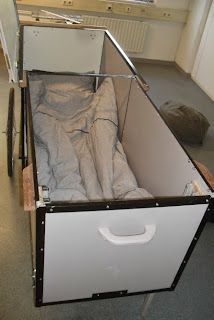 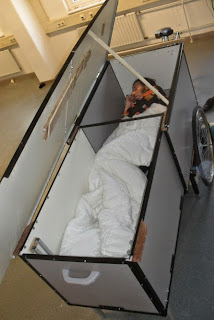 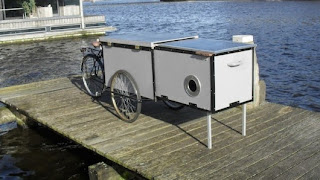 While not nearly as popular or diverse as motor vehicle camping trailers, pedal-powered campers like the Midget Bushtrekka provide another form of mobile shelter. Not to be confused with the Tricycle House, the Housetrike is a pedal camper with a unique form. It looks like a basic cargo trike at first, but extends into a lockable sleeper for one.

The cargo trike meets bicycle camper in the HousetrikeWith a few simple adjustments, the Housetrike sets up in shelter modeThe Housetrike can store and transport belongings, work tools, etc. The Housetrike is a prototype for now, but its inventor hopes to pursue a production versi...View all
Not surprisingly, bicycle camper designers tend to borrow heavily from their motor vehicle counterparts. A little bit of digging pulls up bicycle-bound teardrops, fold-out tent campers, pop-tops, and even hard-sided trailers with above "driver" sleeping extensions.

In developing the Housetrike, Dutch artist Bas Sprakel also borrowed a trick we've seen in the vehicle camper market, on everything from compact camper vans like the VW DoubleBack to massive 8x8s like the Unicat MXXL 24 AH. That particular trick, the sliding camper extension that increases living space while keeping travel configuration more compact, seems well-suited to a small trike trailer.

The Housetrike can store and transport belongings, work tools, etc.
The Housetrike's sliding-box design appears to keep it fairly slim and balanced when compared to other cycle camper set-ups – it looks comparable to a cargo trike when in ride mode. In fact, when the camper box is compacted, the Housetrike is essentially a cargo trike, carrying up to 500 liters (18 cu ft) of gear and personal effects. The low, front-mounted box definitely looks easier to ride with than a tall box trailer.

When it's time to park the bike and call it a night, the box extension slides out from inside the main box and about doubles the size, providing sleeping space for one person, with set-up taking less than a minute. The extension is supported by two legs, so the sleeper can safely hop in, close the hinged box top, slide the roof extension shut and lock up from the inside for security. It looks a bit like sleeping in a coffin, but it would certainly beat sleeping outdoors in inclement weather. The design includes two portholes for taking in exterior views.

The occupant can close and lock the two roof sections for added security and weather prote...
Other bike trailers are aimed at the recreational bicycle touring market, providing an alternative to paying for hotels or carrying traditional tents. The Housetrike could certainly find use in that setting, too. In fact, it was Sprakel's own love of travel in all its forms that inspired the design. But Sprakel has a different demographic in mind for the design. He sees the trike camper as an ideal solution for the homeless, offering a combination of transportation, shelter, security for personal belongings, and possibly even a means of income.

Sprakel's vision is for the Housetrike to give homeless people a way of better controlling their lives. Not only does it put a roof over one's head, it secures and transports important essentials like food, water, clothes and tools. It could potentially be used in jobs like food delivery and scrap metal collection. It also makes the owner a bit more mobile, possibly allowing him or her to escape the harsh winter months or look for seasonal work outside his or her immediate environment.

Sprakel designed the Housetrike as a practical solution, not just an interesting piece of art, and he plans on pursuing production of the design. He hopes to keep the vessel as cheap as possible, estimating a price around US$1,500. That estimate is actually for the cost of building the Housetrike, and the idea is to offer it through a non-profit organization.

You can easily spend $1,500 on a trike without a camper, so it does seem like an affordable price, but it's still a chunk of change for a homeless person. Sprakel has brainstormed some solutions, including setting up rentals and payment plans.

Of course, since the Housetrike is the work of a single artist, there are a lot of "ifs," including whether or not a production version will ever even materialize. After finishing the pictured prototype, Sprakel is pursuing the funds necessary to build a more production-friendly model. He told us that he's considering creating a crowd-funding campaign for the design. He also hopes to get out and tour Europe to publicize the trike.

The video below is a little drawn out and hokey but it does a good job of highlighting the Housetrike in action.