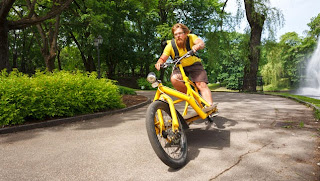 5 businesses embracing the cargo bike
The cargo bike isn't just for hipster families anymore. It's a crucial business tool for urban deliveries.
By: Sami Grover
Thu, Jan 22, 2015 at 03:16 PM
About 50 percent of urban deliveries could be made by cargo bike, one new study shows. (Photo: Inc./Shutterstock)
Cargo bikes are rapidly gaining traction as a green, cost-effective method to transport just about anything. But while much of the focus, in the U.S. at least, has been on the hipster parent doing the urban school run, these modern-day workhorses are also proving to be a valuable commercial tool. In fact businesses and organizations around the world are getting on their (cargo) bikes to cut delivery costs, reduce emissions and raise their public profiles. (The German government has even created a guide to promote the use if cargo bikes by businesses, and some studies suggest 50 percent of urban deliveries could be made by bike.)

Here are some of our favorite cargo bike champions.


Ikea has already won some love in the cycling community by giving away bikes to employees, but in the Netherlands, Denmark and Sweden, customers at select stores can load up their purchases on a specially commissioned cargo bike and ride home. The operation in Delft, Netherlands costs 10 euros for two hours, but the Swedish location appears to offer the use of the bikes for free. As someone who has lived without a car in the city and tried to shop at Ikea, I have to say this is a very welcome innovation. Not only does it allow for low-carbon delivery, but it also introduces potential new riders to the power of the cargo bike — and that can only be a good thing.

Any visitor to Denmark will notice the huge number of cargo bikes on the road. In fact, some estimates suggest that 25 percent of families with two kids in Copenhagen own a cargo bike! One force that has helped normalize this mode of transport is the humble post office. Not only has the postal service been delivering with fleets of cargo bikes for years, it has commissioned its own custom-built Nihola electric cargo bike — and dedicated a postage stamp to it. If that's not bike love, I don't know what is.

Grocery delivery services are already a great way to cut down on miles driven and urban congestion. After all, why does every family need to drive to the store when the store can come to them? But in dense, urban environments, packing a van full of groceries and getting around town may not make that much sense. That's why a Brooklyn Whole Foods store teamed up with People's Cargo to start deliveries with a custom electric cargo bike, complete with cooler and solar-powered recharging.


Much like the Danish Post Office, UPS knows something about moving things around — the last mile of delivery is by far the most expensive of any logistics operation. That may be why UPS has been experimenting with bike deliveries in Oregon, Rhode Island and other locations. As profiled in a Guardian article about the Rhode Island delivery operation, bike fleets have the potential to be scaled up quickly when there's a holiday rush:
Simply hiring extra trucks doesn’t address the problem of the Christmas rush, says Tom McGovern, package operations manager at the UPS facility in Warwick, Rhode Island. “We dispatch 300 vehicles a day from here, and just don’t have the ability to double that in peak delivery times like this.”
In Europe, UPS has even commissioned specially designed bike trucks for urban deliveries.


While some large, mainstream logistics operations are cottoning to the power of the bicycle, there are also some who have been green and clean all along. Take Portland's B-Line, for example, a sustainable urban delivery service that claims to have replaced 30,000 car and truck journeys since its inception.


For all of the focus on big businesses adopting cargo bikes, it's worth remembering that much of the current cargo bike renaissance has been driven by small businesses operating "fleets" of just one or two bikes. From potter Sarah Howe, who rides hundreds of pounds of ceramics six miles to the farmers market in Durham, North Carolina, using her Organic Transit ELF velomobile, to the Little Bread Pedlar bakery in East London, which delivers a regular supply of breads and pastries to cafes around London using nothing but human-powered vehicles to get there. Crank Arm Brewing in my backyard of Raleigh, North Carolina, also deserves a special shout-out for delivering kegs of beer to local taverns in a specially modified rickshaw.