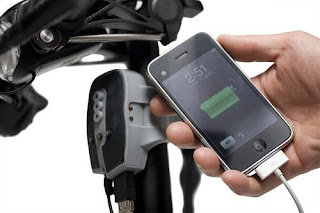 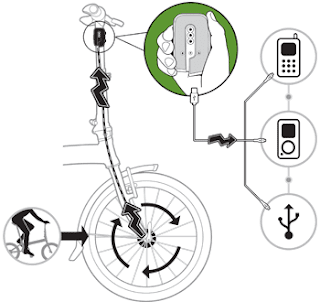 Dahon, the world leader in folding bicycles, today announced the BioLogic* ReeCharge*, a personal power system that mounts to any bike and charges iPhones, iPods, GPS units, or just about any small electronic device, through a USB port. The ReeCharge incorporates a battery that stores power generated by a dynamo hub while cycling.

“There are millions of bicycles on the market with dynamo hubs that generate electricity while you ride,” stated Joshua Hon, Dahon vice president. “We consider it a shame that most of that electricity is wasted because LED lights are so efficient these days and you don’t need lights during the day anyway. So we came up with a way to capture and store that energy for use when you need it. It’s personal power on demand.”

The BioLogic ReeCharge connects to all dynamo hubs on the market. Proprietary circuitry converts and regulates the intermittent power generated by the dynamo hub, for input into the ReeCharge’s high capacity lithium polymer battery. The battery then outputs a stable current to safely charge electronic devices. Devices that are not designed to output a stable current to electronic devices can damage the batteries of those devices. The BioLogic ReeCharge attaches to a bicycle by means of a wrap-around silicon case. The weatherproof silicon case even features sealed cable ports.
Publicado por cecilio benito alas en 1:03 a. m.