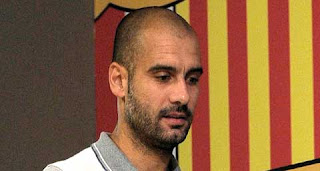 A VERY rare situation occurred in the summer of 1990 at the Barcelona club. Arch-rivals Real Madrid officially placed their interest in signing their player Luis Milla, giving the newspapers a lot to harp on. Milla was not only a regular in Johan Cruyff’s squad, but also had emerged through the club’s youth academy.

“We can’t allow this,” said the then vice-president Joan Gaspart.

“Let Luis go. I already have a replacement. And believe me, he’s much, much better,” countered Cruyff nonchalantly, leaving Gaspart bewildered.

Cruyff had in mind one Guardiola, alternately playing in the second and highest youth team at that time. The skinny boy, whose vision and skill made up for his lack of physical strength, played four games that season in Barcelona’s first team. The following year, he grew into a cornerstone of one of the most successful teams of all time.

Now, just more than two decades after his debut as a player, Guardiola, as coach, has led Barcelona to glorious heights. In January, 2009, the then Argentina coach Diego Maradona was attending the Barcelona-Real Mallorca match to watch his star player Lionel Messi in action. He got highly impressed by the way the team, which he himself played for from 1982 to ’84, was performing.

The day after, before the light training session, Barca trainer Guardiola asked if El Diego perhaps would like to say a few words to his squad. Maradona gladly obliged and his words left the hearts of the squad glowing, “You’re an example to everybody. I would like to congratulate you guys. You provide people world over with real football enjoyment. If you continue this way, I’m certain trophies will automatically follow.”

Maradona has been proved right. Trophies, one after the other, are entering the club’s cabinet. But Guardiola continues to remain hungry for more. Hear more about his hunger from him.

I believe I’m talking to a satisfied coach?

Most certainly, although you always have to be beware of satisfaction. There’s always room for improvement.

If we want to describe the way Barcelona are playing under you, it could be ‘hungry’. Is it right?

It’s perhaps the best compliment a coach can receive. Next to skill and vision comes hunger and it’s the most important factor at this level; hunger to keep getting better and hunger to win. That’s what keeps the motor running. Even after 13 major trophies, we still keep burning with ambition.

Please take us back to June, ’84, when you first arrived at Barcelona. What do you remember?

Ah, everything. I come from Santpedor, 40 miles from Barcelona. I joined La Masia, Barca’s youth academy at the age of 12. You don’t just train, but live there. From day one, I loved it and played football every day, with just one target of getting better. All in the shadows of Camp Nou. It couldn’t have been more inspirational.

Even when playing a Champions League final, it can happen that you’ve eight home-made players in the squad…

Yes, we’re very proud of that. It’s so special if you make your debut at the senior level in a shirt you’ve worn since you were a kid. Then that shirt really means something to you.

You also hardly have to adapt because, over the years, you’ve been learning to play in the club’s philosophy, what we call the La Masia stamp. It then doesn’t even matter where you came from. Messi is from Argentina, but if you look at his style, he’s out-and-out a Barcelona player. For our fans, it’s great to have players they can automatically identify with.

How was it playing for the Dream Team?

It was like a dream. Four League titles and the first Europe Cup in ’92. Playing alongside guys like Ronald Koeman, Bakero, Michael Laudrup, Hristo Stoichkov and later Romario. Not only the results, but the way we played also was great.

You’re regarded as a devoted student of the Cruyff-doctrine.

He’s been instrumental in shaping up my career as well as this club. As a player, he brought the club to life in the 70s. Later, as a coach, he did the same. I learned a lot from him, but you take something with you from every trainer, good or bad. And at the end of the day, you’ve to do things your own way. Impersonating somebody never works.

Barcelona are a source of strong regional Catalan pride and have more than 160,000 members. The charisma of Camp Nou is truly global. How do you cope with that?

Well, with the media, I try to be as open as I can. Sometimes that’s difficult, but it’s the best way to get in touch and stay close to your fans.

Of course, you can’t always speak your mind completely. But if you’re honest and, for example, admit when the team hasn’t performed well, that prevents a lot of speculations.

Well, it’s the same with a player as it’s with a coach; when you’re good enough, you’re old enough. Of course, when I started out, I still had to learn a lot, gain experience, but I didn’t have to do it alone. I’ve a great technical staff and a lot of old team-mates in management, so there also lies a great amount of experience and knowledge.

It seems a bit contradictory, but the more you want to attack, the more defensive discipline you need. If you look at my vital tasks as a player, that always was: guarding the balance, keeping the lines together, making sure the spaces between our players never got too big. From there, we started to play football.

At the pitch, everybody has to work together; the forwards need to help pressing, defenders must assist attacking. My way of approaching the game is that if the ball is in the other side of the field, I’m relaxed; if it’s in ours, I’m not.

For example, if you look at our defenders, players like Dani Alves attack a lot. This only works when players like Sergio Busquets and Xavi Hernandez control the midfield. Almost all our attacks start from Xavi and he does it fantastically. In Puyol, we’ve a very reliable central defender and that too helps a lot.

One thing that catches the eye is the quality of your bench. Rotating players usually leads to a lot of unrest, but not in Barcelona’s case…

Anybody playing for this team has my blessing, but nowadays in top football, a big squad is instrumental in winning many titles in one season.

We play so many matches. The key elements of this team are strength, desire, dedication and hard work, which is foremost. I owe everything to the players. Although this team is overflowing with individual talent, no individual, absolutely no one, is bigger than the club.