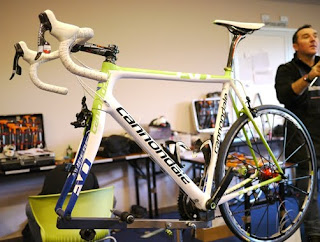 While this may officially be the second training camp in preparation for 2012, it’s truly the start of Liquigas-Cannondale's real campaign. With the previous camp more about team building than fitness, this December camp is really designed to jumpstart the fitness. Fitness that will be needed for big changes to the team’s race plans, but more about that later.

Today the team broke into two groups, an A group riding 4 hours and a B group riding around 3. The A group are those riders they need in peak fitness for early season races like the Tour Down Under and it included the Americans, Ted King and Tim Duggan. The B group was stocked with talent: Basso, Sagan and Nibali.

In contrast to most of the peloton’s riotous upheaval this off-season, Liquigas-Cannondale was fortunate enough to come to the new season with a lot of continuity, from sponsors to riders. The team leaders and race winners all returned, Basso, Nibali, Sagan, Oss and Viviani, as well as most of the support riders like King and Duggan.

Cannondale will have all the riders on the new SuperSix EVO this year, and many will be riding the as yet officially unreleased, Slice RS time trial frame that saw limited action last season. A handful of the Slice RS bikes were undergoing builds during the day, while plenty of last years Slice models were hanging in the racks ready to go.

SRAM returns, outfitting the bikes with RED Black, as does Mavic and their comprehensive wheel line. FSA is still doing cockpit duty while SIDI, Speedplay, Rudy Projects and Elite are also in their traditional places. Look for the riders to campaign SIDI’s new ERGO 3 SP four hole Speedplay specific shoe.

While Nibali will be racing a SuperSix EVO he brought his training bike to camp, a CAAD 10 fitted with Power Cranks, the clutched spindle cranks that allow each crank to turn individually and are designed to improve your pedal stroke’s fluidity and power.

Perhaps the biggest equipment change is the move from FIAT to Citroen as car supplier, another example of how this once quintessentially Italian team is becoming increasingly global.

We saved the big changes for last. While still a grand tour focused team, the disappointing results at this season’s Grand Tours have led to a wholesale change of strategy. Nibali, after running into the buzz saw that is an on form Contador at the Giro, will shift his focus to the Tour de France. Basso, after a Tour that saw him stay safe and ride smart, yet be unable to respond to the big accelerations, will once again chase Giro glory.

Liquigas-Cannondale also plans on bringing a kid named Sagan to the Tour as well. That signals a shift from yellow jersey or bust to stage hunting as well. A move that should make the team much more visible at the World's biggest race.