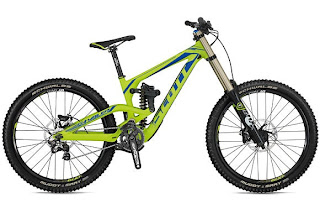 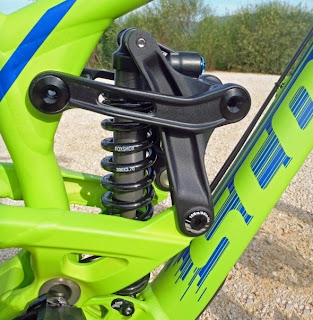 Scott Gambler downhill Mountain comes into the 2013er version as a completely new bike - to adjust to a new rear end, 210 millimeters of travel and a variety of geometry. The new floating-link rear suspension, has two different possibilities for positioning the rear axle in the dropouts are the Scott Gambler chainstay lengths 421-440 mm possible.

In combination with the adjustable rate of Syncros it is possible to lower the steering angle of 64 to 60 degrees - plus another 0.7 degrees, depending on the BB. This can be lowered on an adjustable shock absorption by 10 millimeters.,for the new Scott Gambler built the longest with 267 millimeters current damper. The low center of gravity makes the downhill mountain bike, both in curves and in the air to enjoy - said our tester Thomas "Professor" Schmitt .

The new Scott Gambler, by the professionals of Scott downhill-11 team to Brendan Fairclough are already in the road this season, comes with a frame weight of 3.9 kilograms (without shock absorber).

Single-pivot bikes are simple, right? Not the new Scott Gambler – at first sight, its suspension setup looks as convoluted as the plotline of an Ocean’s 11 sequel. Is there method in their apparent madness? You bet.

It’s the vertical Floating Link that connects the Gambler’s shock, rear triangle and mainframe (via a swing link) that’s key to the bike’s suspension. It allows Scott to fine-tune the leverage rate so it’s slightly progressive at the beginning and end of the stroke but linear in the middle.

2 Life in the bushings

When the shock is compressed it moves downwards in almost a straight line. There’s minimal rotation of the shock bushings, which means they should last longer and, according to Scott at least, increases shock sensitivity. 2013 Scott Gambler 10. Picture by Owen Coutts

The Floating Link arrangement also means that less load is placed on each of the linkage bearings, again increasing durability and sensitivty at the beginning of the stroke.

Scott say a high pivot point is best for absorbing impacts. The Gambler’s is as high as they could go without having to add an idler pulley to combat chain growth, which would have added extra weight and complexity.

The Scott Gambler's pivot is directly above the bottom bracket, at roughly front mech height

5 Centre of the action

Modern downhill bikes tend to have the shock low down, to lower the centre of gravity. Scott say it’s also a big advantage to position it centrally in the frame, so the heaviest part of the bike is between your legs. Makes sense.

The shock ‘cradle’ actually moves downwards as the bike moves through its travel, so the Gambler’s centre of gravity is lowest when stability is most needed – in the rough stuff. Brendan Fairclough rides the new Scott Gambler at the Pietermaritzburg World Cup

The linkage arrangement allows Scott to fit an extra-long (10.5in) shock within the restricted space of the front triangle. The result is a low leverage ratio that gives improved tunability and more consistent damping.

The Pinkbike crew rolled down to California to catch up with Gee Atherton for his first ride on the GT Fury.