The Boa dial on the side of the S-Works Trivent actuates the heel open and closed.

The heel, shown in the open position, drops back to allow rapid entry and exit. We found the hole to be much easier to enter than a traditional tri shoe with a Velcro closure system.

The strap over the arch doesn’t pull hard on the foot, leaving it to flex uninhibited. 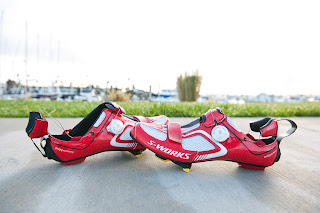 The flat circle on the rear attaches magnetically to the black strap off the heel to keep the shoe open.

When closed, the S-Works Trivent holds the foot remarkably well. 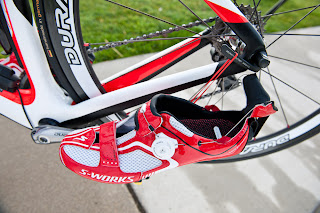 The rear opening works best when the shoe is suspended using a rubber band.

The opening is gigantic and easy to slide in to during a flying mount.

Ready for a flying mount.

The front strap modulates the fit through the arch and toe box.

Practically every tri shoe followed the same basic structure until Specialized released the S-Works Trivent this summer. Instead of a Velcro strap over the arch, this shoe’s heel drops completely, similar to rear-entry ski boots of old. Triathlete Senior Editor Aaron Hersh road and transition tested this new design to see if it really saves time on race day.

This shoe was clearly designed specifically to make the flying mount easier. After experimenting with practically every tri shoe out there, I truly believe the Trivent is the easiest shoe to get in and out of.

When performing a flying mount with most typical tri shoes, the rider stands on top of the shoe to pedal away from transition. The lateral and medial sides of the shoe fold flat and the Velcro strap sits somewhere to the side or on top. Mashing the upper flat against the shoe typically leaves one portion hanging down into the foot opening when you go to slide the shoe on. As a result, the foot gets stuck on that piece of material and you have to and push it out of the way before stepping into the shoe. The S-Works Trivent’s drop-down heel completely eliminates that problem. Instead of futzing with a Velcro strap, your foot slides perfectly into the gaping opening. Easily stepping into the shoe consistently saved several seconds during out flying mount trial runs and enabled a smooth mount during a race as well.

A cleverly placed set of magnets—one on the heel loop and another on the heel of the shoe—holds the heel in the open position. Although they occasionally release if the bike is roughly jostled, the magnets hold the shoe in the perfect position more often than not. Make sure to suspend the shoes using a rubber band or the heel often gets bumped closed.

Once the foot is in the shoe, a couple of turns of the ratchet is all it takes to secure the heel in place. After three or four seconds spent tightening the ratchet, a strong quarter-turn perfectly secures the shoe. Closure isn’t any quicker than a standard Velcro tri shoe once the foot is in place, but this fail-proof system ensures you won’t have to reach down and readjust or re-tighten the strap.

Dismounting is just as easy. Pop the Boa top into the open position and the foot slides straight out.

My original concern with the open-heel design was foot security. Can a shoe really lock the foot in place if it doesn’t have a fixed heel cup? The answer is definitively yes. The Boa wire that passes through the heel flap is exposed and unsupported on either side of the heel so, when tightened, it pulls both tips of the heel cup in toward the foot, actively gripping the heel. Sidi’s highest-level road shoes use a plastic support piece that levers the shoe’s heel cup directly against the rider’s foot, but the Trivent’s heel constrictor is far more effective. Grip on top of the arch is slightly less firm than traditional tri shoes with a Velcro strap straight over the mid-foot, but tightening the small strap over the toe box adequately makes up for it. As a result, the Trivent secures the foot in place more firmly than any other shoe without squeezing the foot. It simply doesn’t provide anywhere for the foot to wiggle.

The biggest comfort issue is the Boa ratchet itself. The hard plastic nub presses into the foot slightly and is noticeable through the shoe. The connection point at the heel isn’t as soft as some, but we still found it sufficiently comfortable for long rides with socks on.

The two biggest benefits of the heel-drop design are easier entry and exit during flying mounts and dismounts, and the rock-solid connection it creates with the foot. Other than the steep price tag, subtle hotspots under the Boa and occasionally around the heel are the only drawbacks.