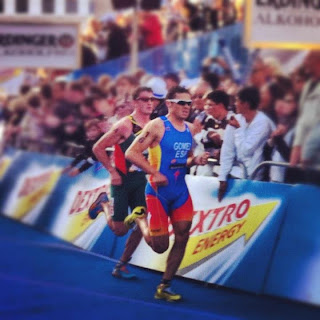 A plan to go all out in the run carried South Africa’s Richard Murray to his first ITU World Triathlon Series win in spectacular style, as he blew away everyone except Javier Gomez and then outsprinted him in the final few hundred metres in Hamburg on Saturday. Germany’s Steffen Justus excited the home crowds, taking bronze in a furiously fast race in Hamburg.

“I think it’s probably the most spectacular one of the whole series, just because of the crowd and the ambience, and because Hamburg city is so amazing,” said Murray. “It was amazing running with Javi, it was definitely an amazing experience.”

The new sprint format in Hamburg promised a fast race, but it was even faster than predicted when the men hammered out an 8:32 swim. Gomez was first out of the 750m swim, with Maik Petzold and Richard Varga just beside him, but they were quickly followed by most of the field into T1. From there a small group of nine managed to pull away, led by Gomez, Petzold, Varga, Christian Prochnow, Courtney Atkinson and Aurelien Raphael, as behind them the field formed into three distinct chase packs, two close behind and a third one minute down after the first lap

Within the second lap, the first chase had merged with the leaders, but Atkinson, Clark Ellice and Dan Wilson then went off the front and managed to stay away, until the fourth and final lap when Reinaldo Colucci bridged up to join them. Those four then left T2 with a 24-second lead on the rest of the field, and Colucci powered to the lead straight away on the run. But Murray, Gomez and Justus immediately cut into the gap, and midway through the first lap they had overtaken all four. From there it was clear it was going to come down to Gomez and Murray, who had an incredible battle with multiple lead changes, bringing the crowd to its feet.

After going toe to toe at the front for the final lap of the 5km run, Gomez initially tried to make a move but couldn’t shake the red-hot Murray, who stayed on his heels and then rocketed to the front down the finishing chute to claim his first series win and the first win in series history by an African athlete. Murray said his plan to put the hammer down from the start paid off, as he recorded an incredible 14:05 run split for the Hamburg course which was accurately measured at five kilometres.

“I just went absolutely all out for the first two kilometres, and then I wanted to see who would still be hanging on,” Murray said. “Because I realised the pace was not really sustainable for five kilometres. So I went out to do it on purpose.”

While he didn’t claim the win, Gomez said he was happy with his second consecutive series medal.

“It was overall a good race, I was the first one out of the water, I had a good second transition but Richard pushed the pace really hard on the first lap I just tried to keep up,” Gomez said. “I made my move on the second lap but I wasn’t that fresh yet and I’m looking forward to some tapering towards the Games. Today Richard was better, faster so I’m happy with second place.”

While Justus claimed third, his second WTS podium in 2012, and said in front of a home crowd it had been just as good as win.

“It’s amazing to get in front of this home crowd to get on the podium, maybe it’s like a victory in another place in the world and I’m really happy with this,” Justus said. “The whole team had really great results, we showed we are a really strong team for London.”

The German team had an excellent day at home in Hamburg, with Petzold finishing fifth and Jan Frodeno 10th to have all three London-bound athletes finish in the top-10. Brad Kahlefeldt also found form, after his pneumonia scare after San Diego, he finished 6th. Colucci’s seventh place was his best series result.

Overall it was an incredibly fast race, with a total of 29 athletes recording sub-15 minute times on a run course that was accurately measured at 5km, according to race officials.