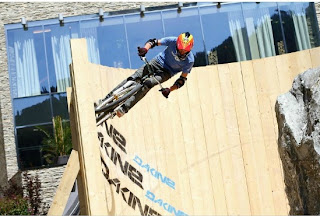 Cycling contributes almost £3 billion to the UK economy shows a new report from the London School of Economics and Political Science which also reveals that almost a quarter of the population are now cyclists.

The study quantifies for the first time the full economic success story of the UK’s cycling sector which generates £2.9 billion for the British economy, equating to a value of £230 for every biking Briton in the country.

208 million cycle journeys were made in 2010 meaning that there were 1.3 million more cyclists bringing the total UK cycle population to 13 million. The increasing levels of participation mean more money with new cyclists contributing £685 million to the UK economy.

cycle pathDr Alexander Grous of LSE’s Department of Management calculated a “Gross Cycling Product” by taking into account factors such as bicycle manufacturing, cycle and accessory retail and cycle related employment. A 28 per cent jump in retail sales last year led to 3.7 million bikes being sold at an average price of £439 each. Accessory sales also made a significant contribution, followed by a further £500 million through the 23,000 people employed in the sector.

The increased levels of cycling also bring a range of benefits for businesses. Regular cyclists take one sick-day less per year, which saves the economy £128 million per year in absenteeism. Dr Grous found that over a ten year period the net present value of cost savings to the economy could rise to be £1.6 billion. A 20 per cent rise in cyclists by 2015 could save a stretched NHS £52 million in costs. There are also potential benefits associated with reductions in congestion and pollution.

The study was commissioned and published by Sky and British Cycling.

Dr Grous said: “The good news is that structural, economic, social and health factors seem finally to have created a true step-change in the UK’s cycling scene. The growth in involvement we’ve witnessed in recent years feels like a sustainable trend for the first time. In order to build on this momentum and follow the lead, in participation terms, of countries like Denmark and the Netherlands, it’s now essential that the industry focuses on converting the many occasional, lapsed and leisure cyclists into regular and frequent riders.”

Stewart Kellett, British Cycling Recreation Director, said: “Building on the success of Beijing and the once in a lifetime opportunity of London 2012, we have an unparalleled opportunity to create a real legacy for cycling as a sport, a recreational activity and as a mode of transport. British Cycling, together with our partners, is making it easier for more people to get on a bike. This report is further evidence that when more people get involved in cycling there are measurable benefits to the individual, their family, their employer, the environment and the economy as whole.“

£2.9 billion gross value of cycling to the UK economy, equalling a gross cycling product of £230 per cyclist per year
3.7 million bikes were sold in the UK in 2010 representing a 28 per cent increase over 2009 figures.
Bike sales in the UK in 2010 had a retail value of £1.62 billion
£51 million of UK retail sales was accounted for bikes manufactured in the UK
The average price per bike in 2010 was £439, lower than an average bike price of £493 in 2009
Around 2,000 retail stores currently operate across a spectrum of activities including sales, servicing, workshops, and other speciality areas
There are around 1,000 additional independent specialist cycling shops

Cycling to work is associated with less all-cause sickness absence. Mean absenteeism in cyclists is significantly lower than in non-cyclists with a significant relationship between frequent cycling and absenteeism, with regular cyclists taking 7.4 sick days per annum, compared to 8.7 sick days for non-cyclists
Frequent cyclists save the economy £128 million in absenteeism per year, projected to save a further £1.6 billion in absenteeism over the next 10 years
Compared with the rest of Europe, the UK has the highest number of sick days taken each year, with 225 million days estimated to have been taken in 2010 at a cost of £17 billion. This equates to around £600 per employee per annum, and an average of 7.7 days per person

A 7 per cent rise in Frequent and Regular cyclists by 2013 could contribute £2 billion to the UK economy over the next two yearS
Frequent and Regular cyclists could further save the economy £2 billion over a 10 year period in terms of reduced absenteeism
A 20 per cent increase in current cycling levels by 2015 could save the economy £207 million in terms of reduced traffic congestion and £71 million in terms of lower pollution levels
Latent demand for cycling could amount to around £516 million of untapped economic potential for the UK
A 20 per cent increase in cycling levels by 2015 can save £107 million in reducing premature deaths and £52 million in NHS costs, and deliver £207 million and £71 million benefits in congestion and pollution