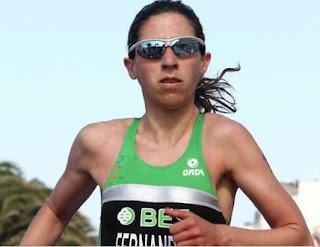 Just months after announcing she was taking a break from triathlon due to “health reasons” triathlon's Portuguese triathlon star Vanessa Fernandes is set to make her return to ITU racing at the rescheduled Yokohama round of the Dextro Energy Triathlon World Series.

Fernandes the 2007 World champion won her first ITU World Cup aged just 17 and owns a record 20 World Cup titles, but since winning a silver medal at the 2008 Beijing Olympics has been plagued with injury and spent the 2009 season sidelined. In 2010 she raced at Madrid, where she had won on six consecutive occasions, only to finish 10th in what was her last ITU race.

A recent and surprise return to racing at the Abrantes Triathlon (750m swim, 20k bike, 5k run) saw her take the win and afterwards she told the Journal Record, “It wasn’t about winning, I wanted to push myself and see what it felt like and I feel good! The atmosphere was fantastic and I want to thank the crowd for their love and affection at this important moment for me, it is very satisfying to feel it. As for the future , one day at a time. ”

It’s not clear yet if the 26 year old has any plans to try and qualify for the London 2012 Olympics.

The Yokohama round of the ITU World Championship Series takes place on September 18th-19th.