Presented as an intelligent damping system, the mountain bike manufacturer Haibike, Ghost Lapierre and her new, electronically controlled damping system called EI Shock. It will automatically adjust the shock in a fraction of a second at the respective site conditions. 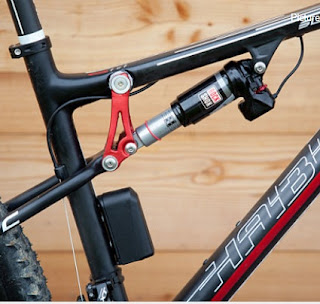 It took a total of five years Haibike, Ghost and Lapierre, together with Rock Shox and Trelock to develop the EI shock absorber system. It aims to ensure that mountain bikers are always traveling with the right damper settings - without having to invest even on hand to strut.

The heart of the new system is the Monarch RT3-shock from Rock Shox, the so-called from a controller - controls - mounted on the steering head of the Mountain

And so the system works!: A total of three sensors give information on to the wired controller. Two of these sensors are located at the fork. They capture speed and strokes occur from the ground. Another sensor sits in the bottom bracket and measures the cadence.

In automatic mode, the controller then determines whether the Rock Shox by the engine must be completely open (in bumpy downhill sections), blocks (while pedaling on flat ground) or is put into a central platform position. The system response time is according to the manufacturer only 0.1 seconds.

In automatic mode, a total of five sensitivity levels are available - from 1 (soft suspension) to 5 (matched firm). In addition to the automatic mode, the mountain biker has the possibility to fully open the damper constant, blocked, or to ride with platform setting.

On a display, the driver is displayed, the mode in which sensitivity level and it is located. In addition, the display will include the current speed and cadence.

His energy keeps the system from a battery that is attached to the frame of the bike. It should last about 25-hours, the charging time is according to the manufacturer for three hours. If the battery is empty, the damper remains in it's current mode.

The EI-shock absorber system that will bring an additional weight of 350 grams compared to a normal Monarch damper comes with it, according to the participating companies this year come on the market. A price has not been confirmed yet.