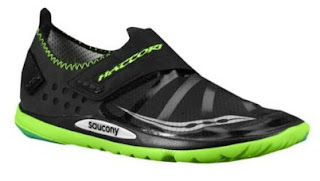 Weighing less than 5 ounces, the Hattori is a minimalistic/barefoot running shoe that’s essentially a sock-like extension of your foot with some protection underneath. It’s made for neutral runners who aren’t prone to injury and who don’t need additional support or cushioning.

Ultralite Mesh on the upper.

0mm at the heel for a barefoot running experience.

The Hattori barefoot/minimalist running shoe was a Saucony first when it rolled out in May 2011.“Most of the time when we get into this weight, we’re talking about track spikes, we’re talking about shoes that are built for a specific purpose only,” said Saucony Senior Designer Chris Mahoney in a video interview.“Everybody wants lighter weight, more cushioning. They want to feel like their (bare) foot is on the ground, but they want a little more protection. So when we developed this shoe, we had our elite athlete in mind.”

To reduce the weight, Saucony built the Hattori with extremely breathable Ultralite Mesh in the upper. The Hattori also has synthetic taping and a hook-and-loop midfoot strap for support. A mitten-like toe box allows for natural movement so toes can grip and push off.To mimic the barefoot feel, the Hattori is built with a 0mm offset (the distance of the foot to the ground is the same from heel to toe).Saucony uses XT-900™ carbon rubber in high-abrasion areas, providing protection to the bottom of the foot. Areas of cushioned EVA provide some cushioning and rebound, and flex grooves are located beneath the toes and in front of the metatarsals for an even more natural running feel.This product can be shipped to US addresses ONLY.

Barefoot running advocates argue that, in addition to preventing injuries, ditching shoes makes you more efficient—meaning you can go faster expending the same amount of effort. After all, the typical trainer adds 10 to 11 ounces of weight to your feet, which surely must drag you down, right?.Not so fast (or slow), a new study finds. Researchers at the University of Colorado recruited runners who regularly ran without shoes. The scientists calculated how much energy the runners expended as they ran barefoot and while wearing lightweight shoes (Nike Mayflys, which clock in at about 5 ounces, about half the average shoe weight).

Should You Run Barefoot?

The findings: Runners used about the same amount of energy wearing shoes as running barefoot. And when the researchers started adding small lead weights to runners’ feet to mimic the weight of heavier shoes, the results got even more interesting. When carrying an additional 10.5 ounces, runners actually consumed about 3 to 4 percent more energy barefoot than in the lightweight trainers.“We think that the most likely explanation is cushioning,” says senior author and physiologist Rodger Kram, Ph.D. Shoes save you energy by absorbing the impact of hitting the ground, which makes up for their extra mass.The bottom line? If you’re going to choose barefoot running, don’t do it because it makes you more efficient. (Click here to learn if going barefoot might help you prevent injuries.)

Instead, make the best use of your energy by focusing on your stride rate. On your next easy run, count your footsteps for 30 seconds, and double that number to get your stride rate. If it’s less than 180 (the rate of super-efficient endurance elites), focus on moving your feet more quickly without running faster.

Those cushy running shoes might be the reason you're always hurt.Those barefooted, Vibram-Five-Fingered evangelists may be on to something. In the first study to look at a direct connection between footstrike and injury, the researchers at Harvard University’s Department of Human Evolutionary Biology found that rearfoot strikers (those of us slamming our heels down in cushiony running kicks) have double the risk of repetitive stress injuries like stress fractures and shin splints than forefoot strikers.The study analyzed data collected from 54 men and women long-distance runners from the Harvard cross country team. Seventy-four percent of runners reported a moderate or severe injury each year, reports Medicine & Science in Sports & Exercise. Looking only at repetitive-stress injuries like shin splints, rearfoot strikers had 2.3 times the injury incidence as forefoot strikers.

“Forefoot strike causes less impact force on the body,” says co-author Daniel Lieberman, Ph.D., a professor of human evolutionary biology at Harvard and scribe of a popular barefoot running manifesto in 2010. “People forget that running is a skill, and if you don’t run properly, you’ll get injured.”.Landing on your forefoot, the way humans have run for thousands of years, produces almost zero impact on joints and bones, according to Lieberman’s 2010 study. But 75 percent of us now land heel first—cushioned running shoes made that possible (and comfortable)—which slams up to 3 times the body’s weight in impact force on your knees and legs. The raised heel bed in most shoes made it nearly impossible not to land on your heel if you naturally have a midfoot strike—though you can run with a forefoot strike in standard running shoes. But forefoot running is not the whole answer to injury prevention, just a component, says Lieberman. “This is not a simple solution to a complex problem—you can’t change one thing and have everything be fine. You can still forefoot strike with poor form.” His advice: If it ain’t broke, don’t fix it.

“Remember, almost every distance runner gets injured,” says Lieberman. “But if you’re prone to repetitive stress injuries, you might benefit from trying a different running form. Forefoot strike takes more strength, a higher cadence, and shorter stride length. Transition gradually, otherwise you’re guaranteed calf strains and tendonitis.”Need a quick introduction? Take off your shoes and do a quick jog on a hardwood floor. Without the give of cushioned running shoe, you’ll quickly feel the painful reality of landing on your heel. Now land on the ball of your foot. Feel the difference?.Also, try running quieter. Rearfoot strikers are a loud group, and by quieting your step, you’ll automatically take weight off the back of your foot, bring your feet under your hips, and increase your turnover. To see it in action and get step-by-step instructions to nailing the form, head to http://goodformrunning.com.

Barefoot vs. Running Shoes: Which Is (Surprisingly) More Efficient? 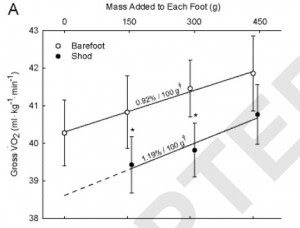 There are three possible headlines for this blog post:

The heavier your shoes are, the less efficiently you run.

The topic is a very cool and thought-provoking new study, from Rodger Kram's lab at the University of Colorado, just published online in Medicine & Science in Sports & Exercise (whose official conclusion is Headline Number 3). While there are plenty of subtleties in the study, the basic idea is very simple. They took a group of runners and measured their efficiency (by measuring how much oxygen they consumed at a given pace) while adding progressively larger weights to their feet. They did this both with and without shoes on. Here's what they found:

One of the findings isn't surprising at all: the more mass the researchers added to each foot (using small strips of lead on the top of each foot), the less efficient the runners became. As previous studies have found, every extra 100 grams per foot made the runners consume about 1% more oxygen. That's Headline Number 2 above, and it's a fact that is often cited by advocates of barefoot running: since shoes typically weigh a few hundreds grams, you should immediately become more efficient by taking off your shoes. But if you look carefully at the graph, you notice something interesting. All the solid dots (shoes on) are lower than the open dots (shoes off), which means the runners were consuming less oxygen while wearing shoes. In fact, the first solid dot (just shoes, no weight added) is lower than the first open dot (no shoes, no weight added). How can this be, if extra weight makes you less efficient?

The inevitable conclusion -- Headline Number 1 -- is that wearing running shoes somehow makes you run more efficiently, independent of the added weight. If you look at equal-weight conditions, the shoes appear to provide a benefit of about 3-4%. The researchers propose two possible explanations for this effect. One is that the runners spontaneously took slightly longer strides (by 3.3% on average) when they were wearing shoes. These longer strides may have allowed them to be more efficient, thought it's unlikely to account for the whole effect. The other is the cushioning in the shoes: without cushioning, the researchers suggest, the runners' leg muscles have to expend metabolic energy to absorb the impact of each stride. They call this the "cost of cushioning" hypothesis.

A few relevant details about the study. The shoes they used were Nike Mayflys, which are very light shoes, with a mass of 135.6 grams for a men's size 9. The 12 runners included in the study were all experienced barefoot runners, running at least 8K (5 miles) a week barefoot or in minimalist footwear. That's not much, but avoids problems with a barefoot learning curve that may have confused previous studies. Finally, all the runners were midfoot or forefoot strikers, both barefoot and in shoes. This condition was imposed to prevent confounding effects from comparing rearfoot to forefoot striking efficiency.

These conditions raise an important caveat. One of the proposed advantages of barefoot-minimalist running is that it automatically helps to correct overstriding -- an extremely common problem among inexperienced runners. The fact that all these runners were already forefoot strikes suggests that none of them were likely overstriding, which would make them less likely to benefit from barefoot running. It's possible that a truly "random" group of runners might have been less efficient in the shod condition, because more of them would have been dramatically overstriding.

Anyway, the bottom line is: this is a surprising result, at least to me. In the long-running debate over running form and running shoes, many of us had started to accept the claim that cushioning in running shoes serves no purpose. But maybe it does, after all. This debate is far from over!