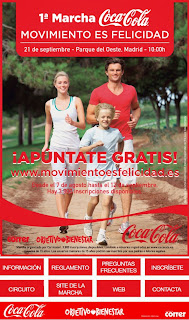 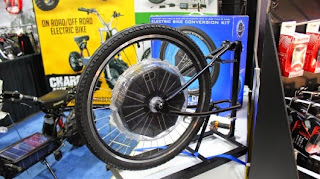 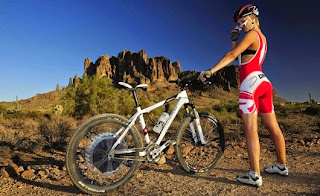 Daymak kit uses the sun to boost your bike

Daymak Inc. has previously brought us some interesting innovations in the world of electric two-wheelers, including the world's first wirelessly-controlled e-bike, and the Beast off-road solar-powered scooter. Now, the Toronto-based company is set to release its Daymak Drive System (DDS) – it's an e-bike conversion kit, that's powered by the sun.

The main DDS component is a wheel equipped with a 250-watt motor and a 36-volt/12-Ah lithium-polymer battery – both located in its hub – that replaces a conventional bike's rear wheel. Its hub also incorporates a series of solar panels, which are protected by a clear plastic covering.

The idea is that as long as the bike is parked or in motion while out in the daylight, even if it's cloudy, those panels will provide a continuous trickle charge to the battery. According to the Daymak rep we spoke to at Interbike, every hour of exposure to daylight should result in an average of one extra kilometer's worth (0.6 miles) of battery power.

A DDS-equipped bike, soaking up the sun
Things like the level of motor assistance are adjusted via the other part of the system, the handlebar-mounted controller. It communicates with the motor wirelessly, and has its own solar panels for charging its integrated battery. That said, both it and the motor's battery can also be charged using mains power, via an included charger.

DDS should be available as of next year, in 26- and 28-inch wheel sizes set up for disc or V-pull brakes, starting at US$699. It reportedly takes less than five minutes to swap onto an existing bike, although if you'd prefer not to do any swapping, a complete DDS-dedicated bike is also coming. 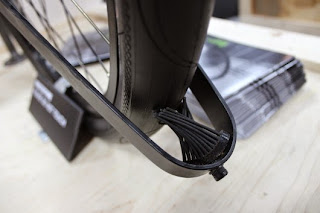 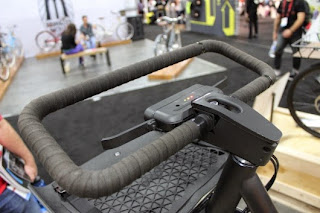 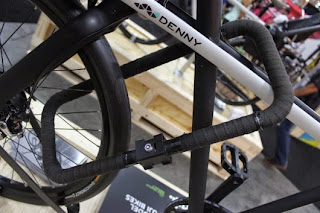 Is the Denny the ultimate commuter bike?


The Bike Design Project-winning Denny on display in Las Vegas
Image Gallery (10 images)
In the Bike Design Project, which took place earlier this year, non-profit group Oregon Manifest invited five design firm/bike-builder teams representing five US cities to create their own take on the "ultimate urban commuter bike." Members of the public were then asked to vote on their favorite, with the winning prototype going on to be produced commercially by Fuji Bicycles. Last Friday we had a chance to get a close-up look at the winner, called the Denny, at Interbike in Las Vegas. Among its unique features is a handlebar that can be removed and used as a lock.

The Denny's integrated cargo net-equipped front rack ...... and the removable battery located underneath it The headlight, activated by an ambient light sensor One of the signal light strips (yellowy-green), along with two of the road-illumination st...View all
The Denny represents Seattle, and was created by that city's Teague design firm and Sizemore Bicycle bike-building company.

It utilizes a Shimano Alfine rear hub transmission, that shifts gears automatically based on the rotational speed of the front wheel – the faster the wheel starts turning, the higher the gear that's selected. Things are made easier by an electric motor in the front hub, which automatically kicks in to augment the rider's own pedaling power.

Lights are also a big feature on the Denny. Not only does it have head- and tail lights that come on automatically via an ambient light sensor, but it also has front signal lights that are activated by buttons adjacent to the brake levers, a brake light function within its tail light, and strips of LEDs which illuminate the road ahead of and to either side of the bike – that last feature is mostly to help the Denny be seen by motorists, as opposed to aiding the cyclist in seeing the road.

All the electronics are powered by a removable battery located under the built-in, cargo net-equipped front rack.

The rubber bristles that serve as a fender substitute
Instead of regular fenders, which can sometimes be kind of clunky, it utilizes a cluster of rubber bristles that lightly brush against each tire – the idea is that these will cause rain water to shed off the tire before it can spray up onto the rider. Won't those bristles just wear away over time, though? Well yeah, they will, which is why Sizemore is currently looking into longer-lasting alternative materials.

... and yes, the square-shaped handlebar can be removed from the stem (by flicking a lockable mounting lever), pulled apart into two pieces, and then used to secure the bike by locking those pieces back together again with part of the frame inside of them. If riders are in more of a hurry, they can also just leave the bar attached to the stem, and simply lock it to a nearby object such as a sign post.

The handlebar remains in place while riding ...
... but can serve as a lock when parked
Other features include the use of a belt drive instead of a chain, and mechanical disc brakes.

The Fuji-built commercial version should be available sometime next year, at a price that has yet to be determined. In the meantime, you can see the prototype in use in the video below.