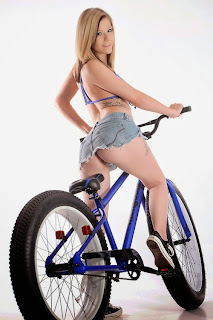 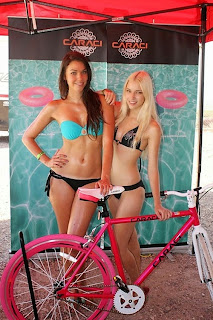 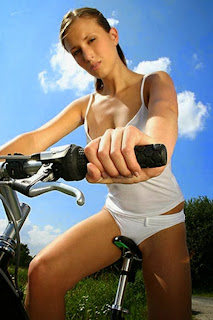 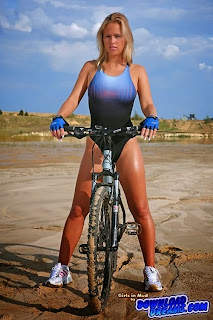 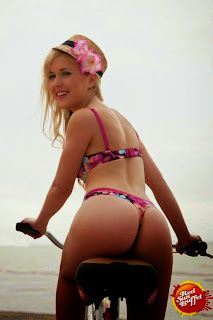 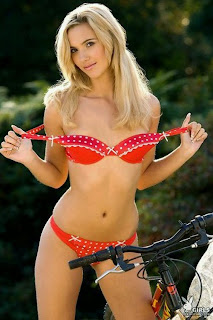 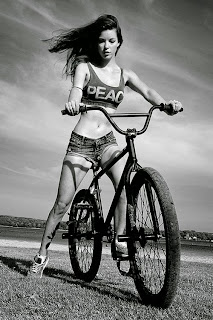 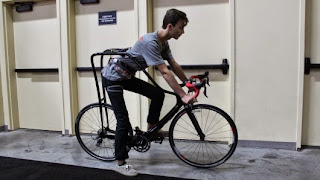 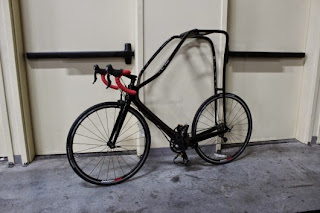 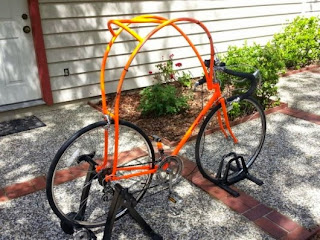 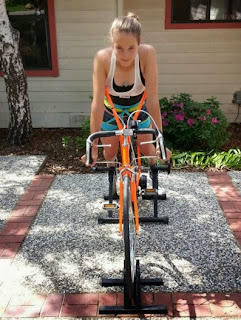 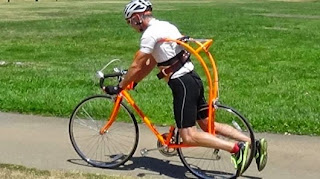 Inventor David Schwartz's son Daniel shows us the Flying Rider at Interbike
Image Gallery (6 images)
Remember the Flying Rider? It was a prototype bike we covered in June, in which the rider hung from a harness instead of sitting on a saddle. The idea was that the padded overhanging part of the frame would keep the rider’s back from bobbing up and down as they pedaled, allowing that blocked vertical motion to be converted into increased leverage on the pedals. Well, despite the fact that a number of our readers thought the whole thing was a little questionable, it’s now going into production.

The first production model of the Flying Rider, at Interbike 2014 An initial run of 100 bikes will be produced The claimed weight is 20 pounds The upper part of the frame is intended to keep the rider's back from bobbing up and down ...View all
This Thursday we caught up with California-based architect and engineer David Schwartz, who designed the Flying Rider, at the Interbike 2014 trade show in Las Vegas. He told us that he will initially be producing 100 of the bikes, which he is hoping to sell through bike shops – they won’t be sold direct.

The carbon fiber frames are being manufactured in Edmonton, Canada by Dynamic Composites, which has previously built disk wheels and aero helmets for the Canadian National Cycling Team. Schwartz will then be outfitting the frames with a variety of components, including a Shimano 105 drivetrain. The weight of the complete bike is a claimed 20 pounds (9 kg).

The first production model of the Flying Rider, at Interbike 2014
Buyers, or the bike shops, will have to supply their own rock climbing-type harness.

If you think the Flying Rider might be for you, its suggested retail price is US$4,770 for the full bike or $2,462 for the frame and fork only. Depending on how much interest he receives from dealers at Interbike, David’s hoping to have bikes in select stores by the end of this month. 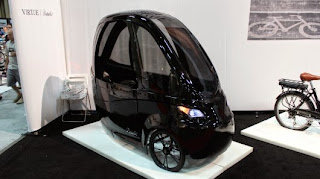 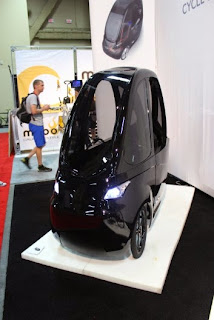 Pedalist velomobile could be a head-turning alternative to driving

The Pedalist on display in Las Vegas
Image Gallery (6 images)
Well, the popular Elf velomobile may be in for some competition. San Diego-based Virtue Cycle Solutions has developed a sort of electric cargo trike/pedal car type thing of its own, that it’s hoping to bring to production sometime soon. We had a chance to take a peek at the snazzy-looking prototype at Interbike 2014.

It's narrow enough to fit through a standard doorway A look at the electric cargo trike that it's built around The shell is made from polycarbonate It has a full lighting system View all
If you could use only three words to describe the appearance of the Pedalist, they would probably be "tall and skinny." A company rep told us that its height helps it be seen by drivers, along with allowing its rider to have a higher view of the road – it's certainly true that the limited visibility of lower-slung velomobiles does limit their appeal to some would-be buyers.

It’s just 34 inches (86 cm) wide, though, which should let it get through standard doorways. Of course, bringing it inside would also likely involve hefting its target weight of 150 to 200 pounds (68 to 91 kg). That figure doesn’t include the motor or battery, which Virtue plans on supplying according to the requirements of the individual buyer – depending on the intended use, some people might want lots of hill-climbing torque while others might put more of a value on range.

It's narrow enough to fit through a standard doorway
The prototype has a full lighting system (including turn indicators), an electric horn, and a full polycarbonate body. The company is also looking at a side mirror that attaches to the shell via a suction cup, along with a possible windshield wiper.

The folks at Virtue are currently gauging investor interest in the Pedalist, and may launch a Kickstarter campaign. The rep told us that they’re hoping to start production by mid to late 2015 and are aiming at a price of US$3,500 to $3,900, not including the motor and battery.