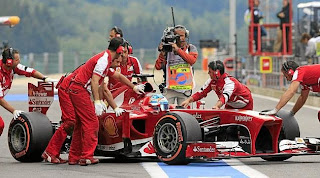 FP2 - Hamilton surges clear of the field in Sochi 10 Oct 2014RB10 grinds to a halt out on track, bringing out the red flags
Mercedes continued to lead the way around Sochi Autodrom this afternoon, but this time it was Lewis Hamilton who pulped the opposition. The Briton was the only man to break into the 1m 39s, and duly ended the session more than eight tenths clear of the chasing pack.

Between them, McLaren continued their strong start in Russia as Kevin Magnussen jumped to second on 1m 40.494s, albeit 0.864s down on Hamilton. And Fernando Alonso made a big improvement in the final half hour to go third for Ferrari after several laps on the soft tyre, with 1m 40.504s.

In general the times have been very tight thus far, Hamilton excepted. Williams' Valtteri Bottas recovered from a tyre blanket malfunction this morning to slot into fifth on 1m 40.573s - three hundredths of a second down on Rosberg, and fractions ahead of Jenson Button, who set 1m 40.718s in the second McLaren, and Felipe Massa on 1m 40.731s in the other FW36.

Daniil Kvyat described his Toro Rosso as "lazy" but remained the fastest Renault-engined runner in eighth, on 1m 41.108s.

Red Bull's soon-to-be deperating four-time world champion Sebastian Vettel was ninth on 1m 41.396s, while team mate Daniel Ricciardo never got out of the midfield and then suffered an early exit when his RB10 rolled to a halt in Turn 11 with eight minutes of the session remaining, briefly bringing out the red flags. The Australian ended the session 13th, on 1m 42.061s.

Q1 proved a disaster for Felipe Massa in the second Williams - as Hamilton set the pace with 1m 38.759s, the Brazilian's FW36 was afflicted by a fuel pressure problem and was duly eliminated in 18th.

Caterham's Marcus Ericsson failed by a tenth to make it through to Q2, with 1m 42.648s to the 1m 42.526s posted by Lotus's Romain Grosjean in 16th. Massa could only muster 1m 43.064s, which still kept him ahead of Kamui Kobayashi in the second Caterham on 1m 43.166s. Pastor Maldonado in the second Lotus was struck by technical problems and couldn't better 1m 43.205s for 20th, while Max Chilton brought up the rear in the sole Marussia, with 1m 43.649s.

There was another big-name faller in Q2. Once again Hamilton led the way with 1m 38.338s, but Sebastian Vettel struggled throughout with his Red Bull and his 1m 40.052s left him out in the cold in 11th place, a fraction ahead of Nico Hulkenberg's Force India on 1m 40.058s.

Hamilton's first lap in Q3 was underwhelming, a full second slower than Rosberg's, but his second restored his previous advantage and he later trimmed down to 1m 38.513s to take a firmer grip on pole.

Rosberg's best of 1m 38.713s left him two-tenths of a second shy of Hamilton's improved time, but Bottas was the danger man as the Finn set overall bests in the first two sectors of his final run. He pushed too hard in the final sector, however, getting loose in Turn 17 and then having to catch wild oversteer through the final corner, scuppering his lap. His previous best of 1m 38.920s ensured him third on the grid and he said that he didn't feel he lost more than one place overall.

That pushed his future Red Bull team mate Daniel Ricciardo down a place, and the Australian lost another right at the end when Kevin Magnussen in the second McLaren banged in a 1m 39.629s lap against Ricciardo's 1m 39.635s. He gets that place back, however, as Magnussen will drop five grid places for his gearbox change this morning.

Maldonado still has a five grid penalty left over from Japan, while besides Magnussen, Hulkenberg and Chilton also have five-place penalties for gearbox changes.

Williams' Valtteri Bottas was the only driver able to threaten the Silver Arrows, while a resurgent McLaren claimed their best team result since the 2014 season-opener in Australia. Their upturn was in direct contrast to Toro Rosso, with Jean-Eric Vergne and home favourite Daniil Kvyat plunging down the order. We take a team-by-team look back on the first Formula One Grand Prix to be held on Russian soil...

Mercedes
Lewis Hamilton, P1
Nico Rosberg, P2
When Rosberg's overly bold passing move under braking for Turn 2 flat-spotted his front tyres, Hamilton was left to cruise to his fourth consecutive victory, his ninth of the season, and the 31st of his career - bringing him level with Nigel Mansell's British record for Grand Prix wins. Hamilton thus opened up a 17-point championship lead over his team mate. Rosberg said the reason he was able to recover to second place was all down to the excellence of his Mercedes F1 W05 Hybrid, but he did a great job to get back up there, having had to run 52 laps on the set of mediums he took after his error. With their ninth one-two and 13th triumph of the season, Mercedes deservedly secured their first Formula One constructors' championship.

Williams
Valtteri Bottas, P3
Felipe Massa, P11
Bottas was able to hang on to Hamilton for the first 15 laps before his rear tyres began to give up, and thereafter he pushed as hard as he could. Unfortunately he couldn't keep Rosberg at bay, but he didn't give up the chase and kept the German honest in the closing stages, even setting the fastest lap on the final tour. Massa's strategy from 18th on the grid was compromised by traffic, and though he followed Rosberg through the backmarkers initially, he became trapped behind Perez for the rest of the race and missed out on a point even though the Mexican was nursing his fuel. Oddly, the Force India had superior straight-line speed, something the Williams has enjoyed all season.

McLaren
Jenson Button, P4
Kevin Magnussen, P5
The decision to revert to the new aero package, taken after FP3 on Saturday, paid off for McLaren in qualifying and again in the race when they were the third best team. Button drove beautifully for fourth, while Magnussen made rapid progress to rise from 11th on the grid to fifth place within the opening four laps. He needed to nurse his fuel consumption in the latter stages, but his position in the top five was relatively comfortable. McLaren's 22-point haul lifted them well clear of Force India in the fight for fifth place overall.

Ferrari
Fernando Alonso, P6
Kimi Raikkonen, P9
Alonso and Raikkonen both rued a lack of straight-line speed and the need to manage their fuel situation and were never in the hunt as a result, though Alonso did a brilliant job of coping with all that while keeping Ricciardo at bay.

Red Bull
Daniel Ricciardo, P7
Sebastian Vettel, P8
Ricciardo got stuck behind Vettel early on and stopped for mediums as early as the 11th lap. That paid off as, although Vettel got to the 30th lap before switching to mediums, the Australian was able to go by while he was in the pits. Thereafter Ricciardo hounded Alonso, without ever quite being able to find the way by. Vettel was a lonely eighth, troubled by his RB10's nervous rear end.

Force India
Sergio Perez, P10
Nico Hulkenberg, P12
Perez had to use a lot of fuel keeping up with the soft-tyred runners on his mediums early in the race, and that cost him later. The Mexican did a terrific job to eke out his fuel and stay ahead of Massa - at one stage his crew declared his fuel situation to be 'desperate' - but he still made it home for the final point. Hulkenberg paid the price for his five-place grid drop, but was closing on Massa and his team mate in the final stages.

Toro Rosso
Jean-Eric Vergne, P13
Daniil Kvyat, P14
Toro Rosso had a bruising race. The STR9 was quick and handled well, but fuel consumption problems obliged both drivers to back off and drive well off the pace in order to make the finish.

Sauber
Esteban Gutierrez, P15
Adrian Sutil, P16
Sauber had little to write home about, apart from the spin that Grosjean tapped Sutil into on the 29th lap.

Lotus
Romain Grosjean, P17
Pastor Maldonado, P18
Lotus had neither grip nor performance, and Grosjean's race was interrupted by a five-second stop and go penalty after he inadvertently tapped a passing Sutil into a spin in Turn 2 on the 29th lap.

Caterham
Marcus Ericsson, P19
Kamui Kobayashi, Retired lap 22, overheating brakes
Ever since Caterham introduced a revised rear-wheel brake-by-wire system Ericsson has been a revelation, and once again he outshone Kobayashi and fought tooth and nail with Maldonado for a long time. Kobayashi, however, retired early with overheating brakes.