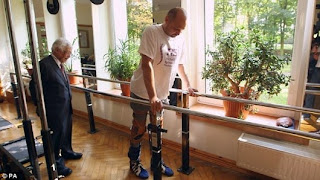 The spinal injury that left Darek Fidyka paralyzed did not see the spinal cord entirely severed, but rather an 8 mm chunk removed from the left side. Researchers have for years worked to develop treatments to help those with spinal injuries, but for Fidyka no amount of therapy was helping him recover feeling below his chest. Now, two years after the groundbreaking treatment, Fidyka has regained some feeling in his legs, feet, bowels, bladder, and can now walk with the assistance of a frame.

The procedure saw the medical team remove one of Fidyka’s olfactory bulbs then grow olfactory ensheathing cells (OECs) in culture and graft the cells onto his damaged spinal column where they helped to re-link vital nerve fibers. According to the UCL, the OECs act as pathway cells that repair and renew nerve fibers when damaged. The team chose OECs as they are the only part of the nervous system with the ability to regenerate in adults.

A few weeks after the initial OEC removal and culture harvesting, the team applied 100 micro-injections of the olfactory cells above and below the injured area. Then four thin strips of nerve tissue from Fidyka’s ankle were applied across the damaged area. After about three months they noticed muscle mass increasing on his left thigh, and after six months Fidyka was able to stand and take his first steps with the assistance of parallel bars, leg braces and a physiotherapist. Today he still undergoes five hours of physiotherapy, five days a week.

"It is immensely gratifying to see that years of research have now led to the development of a safe technique for transplanting cells into the spinal cord." said Professor Geoff Raisman, Chair of Neural Regeneration at the UCL Institute of Neurology. "I believe we stand on the threshold of a historic advance and that the continuation of our work will be of major benefit to mankind. I believe we have now opened the door to a treatment of spinal cord injury that will get patients out of wheel chairs. Our goal now is to develop this first procedure to a point where it can be rolled out as a worldwide general approach."

The BBC Panorama program To Walk Again shows the procedure and footage of Fidyka walking with a frame. When asked what it was like to walk again, Fidyka said, "when you can’t feel almost half your body, you are helpless, but when it starts coming back it’s as if you were born again."

The treatment marks a world first in cell transplantation and paralysis reversal. The project was jointly funded by the Nicholls Spinal Injury Foundation and the UK Stem Cell Foundation. Professor Raisman, who first discovered OECs in 1985, went on to show how the treatment could be applied on rats with spinal injuries in 1997.

Details of the research can be found in the journal Cell Transplantation.