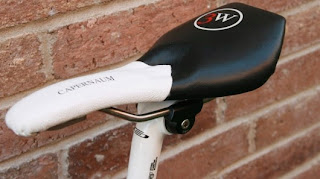 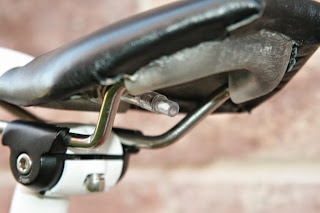 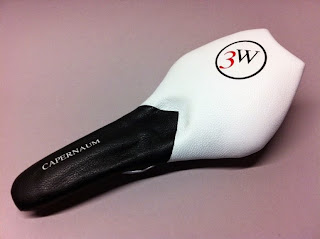 If there's one recurring complaint about conventional bicycles, it's that the saddles hurt peoples' nether regions. As a result, we've seen ergonomic seats that have no material in the middle, that are made up of independently-moving ribs, and that move around with the rider. One of the latest, the Reprieve Bicycle Saddle, combines a dipped middle with an inflatable nose.

Designed by Texas-based 3 West Design, the Reprieve features a fairly normal rear end that supports the rider's "sit bones" much like any other saddle. Its mid-section, however, drops down by three-quarters of an inch (19 mm). This is to relive pressure on the rider's perineum, by not requiring it to take as much of the rider's weight as it would otherwise.

Additionally, the rider's soft tissues are supported by an inflatable polyurethane bladder in the nose of the saddle. This allows the seat surface to deform in response to pressure applied by the perineum (and by ... other things), instead of simply pressing back against it.

Its bladder is inflated using a separate pump
The saddle itself features a genuine leather surface, titanium rails, and weighs about 210 grams (7.4 oz).

If you're interested, 3 West Design is currently raising production funds for the Reprieve on Kickstarter. A pledge of US$100 will get you one, when and if they're ready to go. The planned retail price is $185.

More information is available in the following pitch video. 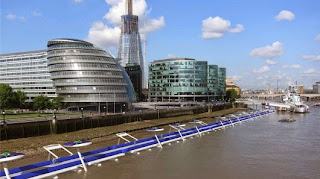 
The Thames Deckway proposal would stretch for up to 7.45 miles (12 km) along the Thames, from Battersea to Canary Wharf (Image: River Cycleway Consortium)
Though cycling can be a great way to get around London, cyclists often need to share road space with fast-moving cars and vans. The River Cycleway Consortium, which includes Hugh Broughton Architects and engineering firm Arup, proposes to build a £600 million (roughly US$965 million) cycle path that floats on the Thames and offers cyclists a safer way of navigating the city.

The Thames Deckway would stretch for up to 7.45 miles (12 km) from Battersea to Canary Wharf, situated close to the river's edge and at a safe distance from all river traffic. The cycle path would rise and fall gently with the Thames' natural tide, and sport access ramps which rejoin the embankment at key points along the route.

According to the River Cycleway Consortium, the floating cycle path would take a fit cyclist around 30 minutes to complete, and command a flat-rate single journey price in the region of £1.50 ($2.40). There would be refreshment kiosks and stopping points available, and a bicycle fleet available which includes family-friendly infant carriages and kid's bikes.

Data such as traffic density, traffic flow, river motion, and any hazards would be monitored continuously by satellite, and all required power would derive from a combination of sun, tide, and wind energy.

The consortium is currently aiming to raise funds for a study of the project’s feasibility and, if all goes well, will seek private investment. The River Cycleway Consortium reports that the Thames Deckway could be up-and-running in as little as two years from being given the go-ahead.