Why I Ride a Bike 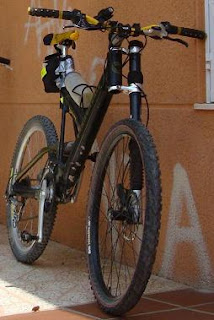 Why I Ride a Bike

These reason for riding a bike are not given in order of importance, nor could they be.
1) Cycling is fun.
As a child, my bike was my favorite toy; it was my horse, my Fokker triplane, my motorcycle, and my race car. But it was also fun just as a bike. We kids played chase, performed stunts, and rode thousands of miles within our neighborhood.

As a young man in college, I thought of my bike as a magic carpet or seven league boots. With little money, I was able to travel all over Alabama and even to Northern Ontario.

After I returned to cycling at forty. I noticed that I was drooling a little while cycling. Part was due to having just quit smoking, but part was due to that little boy inside of me really enjoying himself.
2) Cycling is an opportunity to know a different world.
Is there anything more pretty than a ride late at night with the stars overhead and, from time to time, a falling star?

Is there anything more enchanting than riding after dark with your headlight lighting up the swirling and falling snow?

Is there anything more deeply satisfying than sitting next to a lake or stream, beside your tent, bicycle, and stove, and eating the food you caught and/or gathered?

Is there anything stranger than exploring a cave you discovered by the side of the road, using your somewhat dim bicycle light?

Is there anything hairier than traveling through a dark tunnel on your bike when you can't see either wall or the ceiling?

Is there anything more exulting than to be cycling in the clouds in the high mountains and to see the patches of green and the toy houses below?

Is there anything more humbling than a flat tire during a heavy rain with no shelter?

Is there anything more nostalgic than to be cycling down a road on a long bike trip and suddenly recognize where you are from childhood memories?

Is there any greater satisfaction than to return to the place where another trip had ended, and go on?

Is there anything more powerful than to realize after building up all summer that you can cycle all day and climb any mountain without getting tired?

Is there anything more wonderful than to turn your daydream into a reality?
3) Cycling is healthy.
In the middle of a hundred-mile ride, I was climbing a mountain when I noticed steps had been cut into a giant boulder to make a lookout. Just as I pulled off the road, a car stopped, and the occupants painfully pulled themselves out of their seats and looked at those steps. "I'm not climbing up there," the woman flatly declared, "I'm too tired from traveling, and those steps are too steep." At that moment, I had reached the base of the rock. I leaned my bike against it and ran to the top. It was good to have a chance to catch my breath! I ran back down, jumped on the bike, and started climbing again.

One day, returning to Alabama by bike, I stopped to wash my clothes in Roanoke, Virginia. Two fellows were also doing laundry. They admired my courage and physical fitness, and one of them said, "I'd like to do something like that, if I were as young as you are." "How old are you?" I asked. He said, "forty-three." I said, "I'm almost fifty-one."

I never lift weights, I never condition my abs, I never stretch, I never diet, I seldom see a doctor, I just walk and ride my bike. My weight increases only when I am riding less than 100 miles a week. Cycling keeps me lean, fit, healthy, and happy.
4) Cycling is economical.
A bike doesn't have to cost much. Unlike a car, a chrome-moly bike will outlast the owner, and few parts will ever break or fail. Some parts will wear out: the tires, the chain, the cogset, the sprockets, the brake pads, and the bearings. The wheels will fatigue. Replacing the tires is the greatest maintenance cost. When I had little money, I was able to keep my costs to about a penny a mile by using tires and chains from discount stores and rear cogs from a flea market. My costs are greater now; I have paid $2,000 over ten years and 50,000 miles (4¢ a mile), but I still have my two bikes and gear in good condition.

On the other hand, the average car cost about $5,700 a year. These costs break down to $2,883 for depreciation, $724 for insurance, $696 financial charges, and 9.3¢ a mile for fuel, maintenance, and tires, for a total cost of 45¢ per mile. For some reason, these government figures don't include repairs, parking costs, or taxes. Nor do they consider the earnings necessary to save $5,700. Nor do they include a host of hidden costs, indirect costs, and costs passed on to others. If all costs are included, the total might be as great as $1.25 a mile.

An unmarried cyclist living in the South can live quite comfortably on that $5,700 a year. An apartment costs $200 a month, utilities (gas, electricity, phone, Internet, and water) from $100 to $150, and food from $60 to $100, leaving $300 to $1,400 a year left over for miscellaneous expenses, such as bike tires. Because of being a cyclist, I can save half of my income while I'm working, or I can afford to take a year off to go back to school or to write.

Some people have said that a cyclist has to buy special clothes or eat more foods. First, no special clothes are necessary, with the exception of a rain suit in place of an umbrella. Second, if the cyclist does buy special clothing and shoes, those items take the place of other clothing and shoes the cyclist would have to buy anyway. And cycling clothing lasts just as long as any other. Cycling clothing does not have to be expensive either. As far as eating more, I only eat more when on a long trip; then, I just add more rice or pasta to my diet.
5) Cycling is ecologically sound.
Each person that rides a bike rather than drives a car is helping to save our planet. Our civilization has been burning huge quantities of coal, natural gas, oil, and their byproducts, thus pumping carbon dioxide into the ecosystem. Living creatures absorb most of this carbon, but the excess accumulates in the atmosphere. The result has been 1) a longer growing season, 2) more hot days, 3) more rain, and 4) greater drying. Predicted but not proven results are: 1) more frequent violent storms, 2) drought, famine, and the destruction of forests, and 3) the flooding of coastal cities. Of all of our fossil fuel uses, automobile travel is the least defendable.

The amount of carbon dioxide which motor vehicles produce is enormous. The average car in the US burns about 650 gallons of gas, producing eight tons of CO2 (total production is 20 tons per person). Although fuel economy has increased to 19 mpg, travel has reached 1.6 trillion miles a year, so (adding truck usage) we burn 338 million tons of gasoline and 246 million tons of diesel and other fuels each year. The world consumption of oil has now increased to 3.2 billion tons of oil, thus 10 billion tons of CO2 are produced yearly from oil alone.

But 3/4rds of the automobile trips in the US are for distances of less than ten miles, and over half are for distances of less than five miles. By riding my bike on errands, to work, for weekend recreation, and on summer vacations, I have greatly reduced auto use, and I have had a better life.
6) Cycling is environmentally sound.
Ronald Reagan used to announce for GE, "Progress is our only product." People are often so committed to this ideal of progress that they fail to see that "progress" has been very destructive. We have sold our birthright and have little to show for it. Our forests have been stripped cleaned, our farms are badly polluted, our children are abandoned and carry guns, our cities have become slums, our countryside is a maze of freeways, our lives are empty, taxes and meaningless expenses eat up our salaries, the balance of trade and national debt have reached insane amounts, and our heroes are constantly in trouble over sex and drugs.

Henry Thoreau, speaking 150 years ago, foresaw the problems our civilization was headed towards. He did not attack change ("When one man has reduced a fact of the imagination to be a fact in his understanding, I foresee that all men will at length establish their lives on that basis."), but he pointed that we were not happy ("The mass of men lead lives of quiet desperation."), that we had the wrong goals ("Our inventions are wont to be pretty toys, which distract our attention from serious things. They are but improved means to an unimproved end, an end which it was already but too easy to arrive at."), and that we expected a free lunch at some point ("Men have an indistinct notion that if they keep up this activity of joint stocks and spades long enough that all will at last ride somewhere, in next to no time, and for nothing.") .

The solution, both for us as individuals and as a nation, is to quit following the piper and to rearrange our priorities. True improvement is not always outward ("The kingdom of heaven is within you"). We have to learn to value people over property, Nature over luxury, love and affection over sex and money, and meaningful experiences over financial success. While I recognize that riding bicycles can't solve all these problems, I think that cycling can help people begin making healthy changes in their own lives. Cycling, by itself, can be a good alternative to massive traffic jams, a million injuries and 42,000 deaths a year, high insurance costs, double bypass surgeries, high taxes, and mile after mile of sterile, God-forsaken asphalt.

I know that my own move back to the bike was the best decision I ever made.

Under the circumstances, it is proper to wonder why our entrapped multitudes do not seek escape from the hive, once more asserting their individual independence as men. The door stands open on the outside world. I conclude that we have lost our knowledge of the outside world, and fear of the unknown is greater than any accustomed horror. I have seen a bird cowering in its cage when the door was open for its escape.