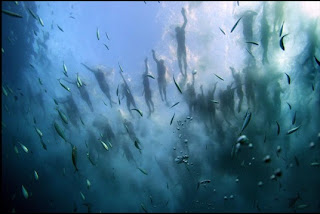 LAVA senior photographer Donald Miralle was recently recognized by World Press Photo for his Kona mass swim start photograph, pictured above. The photo took first in the Best Single Sports Image category for 2011. This is a prestigious distinction by the largest and most respected photojournalism organization in the world, on par with the Pulitzer Prize, and all of us here at LAVA would like to extend our sincerest congratulations to our colleague. The contest by the numbers: 5, 247 photographers, 124 nationalities and 101, 254 total pictures entered. 350 images by 57 photographers of 24 nationalities were awarded prizes in 9 categories. Learn more about the organization and view the winning photos at www.worldpressphoto.org. This win brings triathlon attention in the sports and media communities worldwide, and we are very proud to have featured it on our December/January cover. The contest was covered by the New York Times, The Washington Post, and the Guardian, to name a few. You can read the full story behind how this photo was shot over on Miralle’s blog, but here’s an excerpt:

So as I was sitting there at about 6:59 a.m., 30 feet on the bottom of the bay, trying to line up schools of fish below schools of man without getting too many bubbles from my mouth and regulator in the frame, and getting the correct exposure/focus as well, when I noticed in the corner of my eye the battery was blinking. All I could think was “shit my camera is going to die before this start, and I’m gonna miss it all,” and less than a minute later I could hear the muffled cannon fire, the surfboards holding the line of swimmers open, and the mass of humanity swim overhead. Click, click, cli… and I got about 2.5 frames in the first second of the race before my camera crapped out. All I could do was swim back to land and pray that I got one usable frame out of all the time and preparation that went into that morning. A week later as I entered the LAVA offices to show my images from Kona to the publisher and editors, and I had one image in mind from the 60-plus I was showing that stood out in my as the strongest contender for the cover. It wasn’t a classic image of Chrissie Wellington crossing the finish line, nor one of Craig Alexander crushing the course record becoming the first man to win the 70.3 and Ironman World Champs in the same year, but rather an artistic frame of anonymous swimmers among a school of fish in the bay. I’ve shot all but one of the cover photos run by LAVA, and they are usually lit, stocky, tight action or portrait shots; this scene setter from Kona was a long-shot by those standards. The fish frame was one of those images and moments you get once in your lifetime, where all the elements line up, and preparation meets opportunity. Editor-in-chief Brad Culp went to bat for me on this one, and after a couple heated debates over what the best cover image should be, they went for it. It’s my favorite cover shot yet and it’s for the best as all the other triathlon magazines will have that stocky image of the finish line. LAVA will have that different shot that no one else runs.