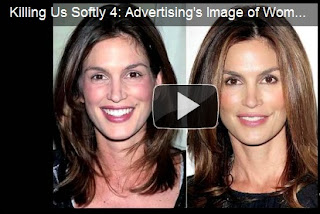 The most famous stars without makeup!

In this update of her pioneering Killing Us Softly series, Jean Kilbourne takes a fresh look at how advertising traffics in distorted and destructive ideals of femininity. Killing Us Softly 4 stands to challenge a new generation of students to take advertising seriously, and to think critically about popular culture and its relationship to sexism, eating disorders, and gender violence.

Jean Kilbourne, Ed.D. is internationally recognized for her groundbreaking work on the image of women in advertising and for her critical studies of alcohol and tobacco advertising. In the late 1960s she began her exploration of the connection between advertising and several public health issues, including violence against women, eating disorders, and addiction, and launched a movement to promote media literacy as a way to prevent these problems. Kilbourne is the creator of the renowned Killing Us Softly: Advertising's Image of Women film series and the author of the award-winning book Can't Buy My Love: How Advertising Changes the Way We Think and Feel and co-author of So Sexy So Soon: The New Sexualized Childhood and What Parents Can Do to Protect Their Kids.