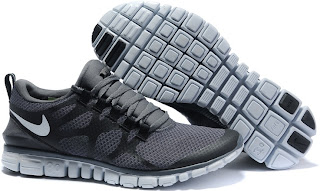 Nike Free 3.0 from Runblogger on Vimeo.


Review of the Nike Free 3.0 as a Transitional Minimalist Shoe

Nike Free 3.0 - 2nd Generation
About a month ago I wrote a series of posts in which I was critical of the newest member of Nike's Free line of minimalist running shoes: the Nike Free Run+. The strong response to these posts took me by surprise, and though I found a lot of agreement from readers, I think some people misunderstood the point I was trying to make. It wasn't so much that I had any particular problem with the Free Run+ itself (I'm sure I'd probably like running in them if I had a pair), it was moreso a problem with how the shoe is being marketed as one that promotes "barefoot-like" running despite the fact that it has "more cushioning," a non-zero heel-toe offset, and increased arch support for "improved stability." The bare human foot does not have added cushioning beyond it's own soft tissues, has a zero offset, and has no external arch support for "improved stability." I find it very unlikely, given these design elements, that the Free Run+ will promote the midfoot/forefoot footstrike that is a hallmark of barefoot running - this was the point I was trying to make in those posts. If Nike had simply pitched the Free Run+ as a minimalist shoe rather than emphasizing the barefoot-like angle in their marketing, I wouldn't have written those posts. I'd love to give the Free Run+ a try so I can formally and fairly review it, but I can't justify spending money on it when Nike makes a Free shoe that is more minimalist than the Run+ - the Free 3.0. The latter is the shoe that I will be discussing in this post.

The original Nike Free 3.0 holds a special place in my running shoe collection because it was the first truly minimalist shoe that I ever ran in. I had read Christopher McDougall's book "Born to Run" early last year, and found his arguments against traditional running shoes to be compelling (I've since moderated my views significantly on this - check out this post as an example). I wanted to try going more minimalist, but being wary of jumping right into barefoot running or running in the Vibram Fivefingers, I decided to look for a more moderate transitional shoe - the Free 3.0 fit the bill nicely. It was lighter than any shoe I had previously worn, was very flexible, and had a sock-like upper. I ran and raced several hundred miles in the original Free 3.0 (you can read about my early experience with the Free 3.0 here), with long runs extending to 20 miles, and just last month bought a pair of the Free 3.0 v2, which I have used as both a work shoe and on a few runs. My overall experience with both versions has been highly positive, and I can honestly say the Free 3.0 is one of my all-time favorite running shoes.

Nike Free 3.0 heel wearAlthough some might disagree, I view the Free 3.0 as a minimalist running shoe, but like the Free Run+, I don't view it as a barefoot-like shoe. I agree with Nike's contention that the outsole siping/grooves make it remarkably flexible, which allows your feet to work in a more barefoot-like manner, but the fact that it has a heel and a cushioned sole make it very easy to heel-strike in it, and my wear patterns on the sole of my original Free 3.0's indicate very clearly that heel striking is what I do when I run in them (see picture at left - the black rubber pad has completely worn away from the lateral heel in the shoe on the top; see also the slow motion video below). I don't necessarily view heel striking as the horrible thing that some make it out to be (I'm quite content to be a mild heel striker in most of my shoes), but heel striking is not what I (or most other people) do when I run barefoot or in Vibram Fivefingers (I have run 100+ miles in Vibrams, and have also run barefoot a few times).


If the Nike Free 3.0 doesn't promote a midfoot/forefoot footstrike as happens when I run barefoot or in Vibrams, then what benefit have I gotten from running in it?

1. Comfort. Perhaps the main reason why I like both versions of the Free 3.0 so much is that they are ridiculously comfortable - they feel akin to wearing slippers on your feet when you run. The upper has very little structure to it - in the original Free 3.0 it's basically a thin layer of fabric, whereas in the second generation Free 3.0 some cushioning has been added to the ankle cuff (see comparison picture below). As I mentioned above, one of the main reasons I bought a second pair of black Free 3.0 v2's is so that I could use them as a work shoe - it's awesome to be able to spend a day with these on your feet as opposed to a pair of heavy, stiff leather work shoes.

2. Weight. The Free 3.0 is a very lightweight shoe, with both models weighing in at under 7oz (in my size 10). You barely notice when these shoes are on your feet.

3. Heel-Toe Offset. I don't know the actual #'s on the differential in thickness between the heel and toe, but the Free 3.0 has a much lower heel than most traditional running shoes. While there's still enough cushioning there to allow me to continue heel striking, it was enough of a reduction that I felt it in my leg muscles when I first started running in them. I wasn't sore in the calves like I was after my first runs in the Vibrams (which have no built-up heel), but the Free 3.0's did seem to work my muscles in a different way than previous shoes I'd used, and perhaps helped me to have a smoother transition into the Vibrams than others who make the jump straight in.

4. Silence. One of the coolest things about running in the Free 3.0's (and this may be true of the other shoes in the Free line) is that you can barely hear your footfalls when you run in them - you feel like a cat or a ninja who moves effortlessly and quietly along the ground - sounds silly, but it's true. This is due with the properties of the material making up the outsole, which despite it's seeming softness has held up pretty well for me in the original Free 3.0 over 220+ miles of running and walking.

5. Flex. The flexibility of the Free shoes due to their deeply grooved outsole (see picture below) is the real deal - these shoes flex as well as almost any other that I have worn, and it was one of the things I noticed immediately the first time that I put them on. I do believe that they work your feet in ways that stiffer traditional shoes cannot, and this is a big plus for the Nike Free line.


Given the above features, I view the Nike Free 3.0 as a great choice as a transitional shoe if you're thinking about working your way down to running barefoot or in an extremely minimalist shoe like the Vibram Fivefingers. Some disagree with this approach, saying that going barefoot from the start is the best approach so that immediate sensory feedback from your feet can prevent you from doing too much, too soon, but the transitional approach worked well for me, and I have managed to avoid any serious injuries so far while running in Vibrams over the past 8-10 months (I should point out that although I've tried barefoot running, I'm not a barefoot runner). The important thing to remember with any new shoe, and with minimalist shoes in particular, is to not overdo it - give your feet and legs time to adjust to these shoes, and resist the urge to do too much, too soon.

I'll finish by saying that part of my disappointment regarding the release of the Nike Free Run+ stemmed from my belief that it's arrival was going to coincide with the disappearance of the Free 3.0. This would have been unfortunate since the Free 3.0 is one of my favorite shoes, and one that has played a big role in my minimalist transition. Turns out that the Free 3.0 is still available, at least for now, so if you want to give it a try it can be found at a few places on-line (check the Nike Store for starters) - not sure how long it's going to last.