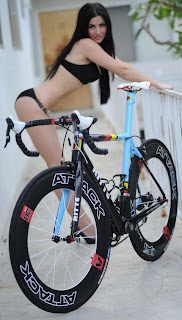 New York: Riding a bicycle regularly can take a serious toll on women’s sexual health, if it has low handlebars, researchers have warned.A recent study from Yale University found the lower the handlebars, the greater the trouble for women, according to the New York Times.Explaining the reason the researchers said if a woman has to lean forward more to reach low handlebars, she is putting more pressure on sensitive areas, which can lead to numbness and potentially cause sexual dysfunction, New York Daily News reported.The study, published last month, tested 48 women, each a dedicated rider who pedalled a minimum of 10 miles a week, but often much more.

Researchers noted that riders who lean forward, flatten their backs and place their hands on the “drop bars” of a bicycle, aiming for a more aerodynamic position, reported more problems with numbness in the pelvic area.While raising the handlebars seems a logical solution (though not an easy one for serious riders), female riders, like male riders, may also face problems with the seat.

While more research needs to be done on female cyclists, Steven M. Schrader, a scientist at the National Institute for Occupational Safety and Health, suggests that one way to reduce the pressure on the perineum, a part of the body he said was never meant to withstand sustained pressure, is to use a bicycle saddle without a nose -- which lack the sleekness of a standard seat but could spare you some agony.

While Schrader’s prior research on these types of seats with male riders has shown positive results, he suggests the seats might benefit women as well.“If you don’t put weight there, there’s no pressure,” he told the New York Times.