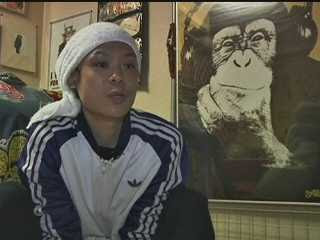 Constantly honing his style, Ito looks for inspiration from across the animal world using the internet and a season ticket to the local zoo. So far he's developed six distinct forms of all-fours movement from his top-speed "gallop" to a more leisurely walking pace, and recruited about 100 converts across seven countries.

No monkeying around for Japan man, fastest on four legs.Running like a monkey is serious business

(Reuters) - In the suburbs of Tokyo lives Kenichi Ito, the world's fastest man on four legs.

For nearly a decade, the 29-year-old Ito, long a fan of simians, has been perfecting a running style based on the wiry Patas monkey of Africa, winning himself a Guinness World Record in the process."You know, my face and body kind of look like a monkey, so from a young age everybody used to tease me, saying 'monkey, monkey,'" Ito said in his neat apartment, sitting in front of a large poster of a chimpanzee."But I wasn't really bothered because I really liked them, and somewhere inside of me I had this ambition to adopt one of their traits. When I saw a monkey that could run fast, I knew I'd found it - and from that point on I practiced running like a monkey every day."

For eight-and-a-half years the slender Ito has walked around his neighborhood on his hands and feet, wearing gloves and cleated shoes. He has turned his household chores into challenges on all fours and squats like a monkey while talking.Constantly honing his style, he looks for inspiration from across the animal world by using the Internet and a season ticket to the local zoo.So far he's developed six distinct forms of all-fours movement, from his top-speed "gallop" to a more leisurely walking pace. His speed at running 100 meters on all fours, just under 20 seconds, won him a Guinness record.

Occasionally Ito, who survives on money earned through his running as well as part-time jobs, gets together with fellow four-legged running fanatics to race each other. Sometimes, they bring cats and dogs to join in the fun - though a well-trained dog will usually win.Ito believes so fervently in his form of "sport" that he is convinced athletes of the future will eventually come around to his point of view."Certainly four-legged running isn't an Olympic sport yet, but my prediction is that in 500 years' time all track athletes will be running on all fours," he said.But his passion for simians has not been without setbacks."In the streets around here I get stopped by the police, so I went up into the mountains for about a month for a kind of four-legged training camp," Ito said."But on the first day, a hunter mistook me for a wild boar, and he tried to shoot me."