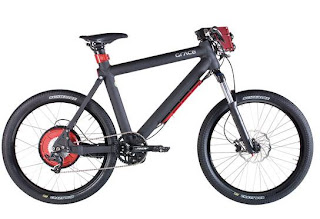 A German based company named GRACE has created the world’s first e-motorbike which may however seem a futuristic version of a usual bike, but in fact, this e-motorbike can be run on today’s street. GRACE has handmade this bike using parts from formula one and euro-fighter planes which will be launched for test purpose shortly. The handlebar contains all the controls of the bike such as light, alarm system, battery management and other necessary stuffs which have made it easier to ride than any other conventional bikes. The indestructible frame gives the e-motorbike enough durability to sustain in rough surface and bad weather condition.

Motorized bicycles aren’t always pioneering, but there is no better adjective that best describes the new Grace e-motorbike than exciting. With a combination of sporty features and tough skin, Grace e-motorbike is one of the most sexiest two-wheeled pedal pushers. We have featured Grace One in our previous post, now we want to share with you Grace Pro E-Motorbike. The new bike, with an aluminum frame can go above 45 km/h for just one battery load. Handmade in Germany with euro- fighter plane parts as well as formula one part, the bike is expected to come out this month. All controls such as lights, alarm system together with battery management are integrated in the handlebars with indestructible frames. Even after the battery has debilitated, there is no compromise to the pedal power. The Grace Pro E-motorbike thus offers greater flexibility one might need.