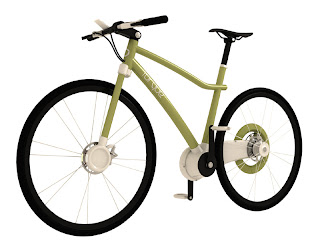 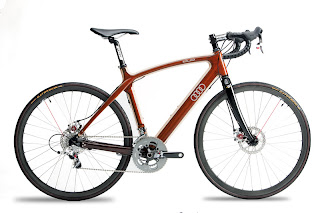 Audi of America will launch “the duo – an Audi-inspired bicycle collection that embodies the best of both worlds: luxury and performance.” Bikes from automakers have been discussed on this blog before, but these are a little different. The bikes from Audi will be wooden…handmade in Portland, OR by Renovo. The three new models will be available in hardwoods selected to match Audi vehicle interiors.
duo Road – A performance road bike, good for club and century rides. Features include narrow tires; no fenders; minimal accessories; and SRAM Red, compact 20-speed gear train. Price: $7,460 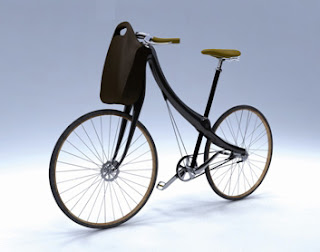 Globike, is a city bike by Torino, Italy based design firm ZAAFDesign. According to the designers, Globike is “inspired by ergonomic principles enjoying comfort with style. Particular attention has been placed on the analysis of energy needed to produce movement. The form has been studied in order to obtain the optimal positioning of the saddle’s height and depth.” You can read more about the bike, which features a carbon frame with a titanium seat tube, on ZAAFDesign’s 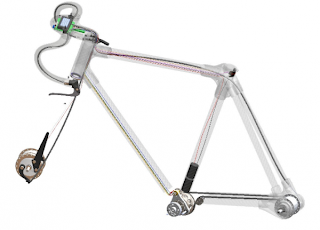 The Alpha bike is “the first fully internal drive system that includes a transmission that allows the rider to switch between freewheel and fixie using just a switch on the handlebars.” It was designed and built by a team of mechanical engineering students at the University of Pennsylvania over the course of a year. Geoff Johnson, one of the designers, explains that the bike features an internal cable routing system, which holds an electronics system inside the handlebars. An LCD mounted in the handlebars, which were 3D printed and laid up in carbon fiber, feeds out data to the rider. 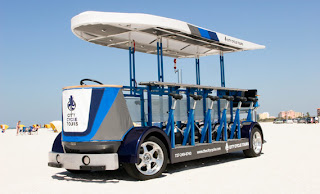 the City Cycle relies on its passengers (10 out of the 14 in this case) to propel the vehicle. This is more than just a CoBi with a keg in the center though. The City Cycle was built using techniques similar to custom automotive construction, and Casimir points out that it is “tricked out with a keg, tap, in-floor coolers, beefy stereo system and dramatic LED lighting to provide a totally new lounge experience.” The designers incorporated “a low running-board-style deck as well as adjustable seat posts to accommodate a variety of heights and abilities. Also included are a grab-rail for the pedalers and a driver-forward design that creates an open deck for socializing.” 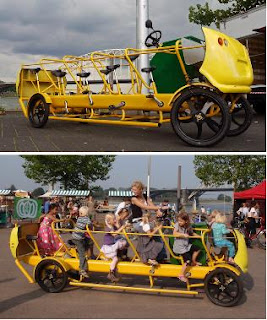 This bicycle bus for children, made in the Netherlands by De Café Racer 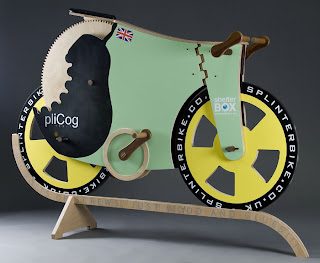 The cogs, wheels and frame are made from birch ply. Ironwood – an oily wood – is used where moving parts meet. The pedals and handlebars were made from an old broom handle. There’s no chain. Instead there’s a 128-tooth cog that links the chainring and the gear on the rear wheel.”

It is a pretty impressive design exercise, but apparently simply building the bike wasn’t enough. With Tully, an accomplished triathlete, riding the bike on a velodrome, Thompson plans to break the “100% Wooden Bicycle Land Speed Record”. Well…not exactly break the record, since no such record has been attempted before. They do plan to set an official record with the Splinter Bike though. Initially, Thompson and Tully “didn’t realize that setting a land speed record involves certain unavoidable costs.” As Thompson says on his website, “We thought that we could knock up a wooden bike and run it down the road, follow along in a car, check the speedo and hey presto… we’ve just set a land speed record!” It is not that simple though, so they are now trying to raise £7500 to pay for the specialized speed measuring equipment that they will need.