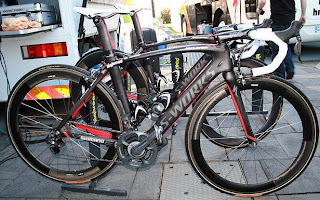 
Specialized today unveiled the jewel in their road bike crown – the McLaren Venge. The bike is the result of a nine-month collaboration with Formula One racing giants McLaren. It'll be used in competition for the first time at Milan-San Remo this weekend by a select group of riders from Specialized-sponsored teams, including Mark Cavendish (HTC-Columbia).

BikeRadar were invited along to the top secret launch at the imposing McLaren Headquarters in Woking, UK to catch a first glimpse of the impressive machine. It'll be available in two models: the S-Works Venge will be available to buy in the UK from the end of April, but the model we were shown today – the McLaren Venge – is being held back until September.

Over four-and-a-half years in the making, the Venge is the brainchild of Specialized's head of research and development Chris D'Aluisio. He was testing a modified Transition with drop bars in 2006 and was 'blown away' by the speed it offered. It was then he realised the potential in creating a road bike with all the properties of an aero bike. So they got to work on creating an aerodynamic frame.

McLaren had approached Specialized in March 2009 about a possible link-up between the companies. It was in July last year that Specialized took the prototype of the Venge to the carbon fibre experts of McLaren. Through their filter, the collaboration produced the model unveiled today, the McLaren Venge. D'Aluisio told BikeRadar he couldn't believe it when told of McLaren's approach, and was on the plane over to visit them the next week. "Sitting down with the McLaren team and seeing how passionate they are about racing and to hear about how much they love biking – that was pretty cool," he said.

He also revealed Specialized had approached a number of other teams before McLaren got in touch, but were put off by the idea of a simple branding exercise. "That's not McLaren," he said. "It's in their DNA to do high performance products. They do Formula One cars, they do road cars and I don't think they'd have taken on the project unless they really thought they could make a big change."

Claimed weight for the Venge frame is 950g, with the complete module (frame, fork, seatpost, crankset) tipping the scales at 2.07kg for the McLaren and 2.18kg for the S-Works. But of course, the focus with these bikes wasn't just on cutting weight.

Specialized have conducted track testing with the Venge against their current top-line race bike, the Tarmac SL3. Claimed watts saved by the Venge range from 3W at 20km/h to a whopping 23W at 45km/h, and presumably a lot more than this at Mark Cavendish's sprint speed of around 70km/h. Giving a professional rider that sort of advantage is incredible and should be apparent from very early on in the season.