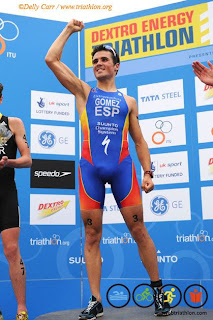 Untitled from INFOLUNA on Vimeo.

The battle for the 2011 Dextro Energy Triathlon ITU World Championship Series is back as the world’s best triathletes prepare to hit the first European stop and second stop overall, Madrid.

Madrid has long been a fixture on the ITU circuit, first as a World Cup and now has been part of the first two seasons of the Dextro Energy Triathlon Series. In the last two years, Alistair Brownlee (GBR) has dominated the men’s races, keeping Javier Gomez (ESP) off the top podium spot in his home country. While Nicola Spirig (SUI) and Andrea Hewitt (NZL) have claimed the women’s titles the past two years.

This year, the world’s best are back to race in picturesque Casa de Campo park in central Madrid. Here is a look at the contenders for the second round of the 2011 Dextro Energy Triathlon ITU World Championship Series.

Elite Men
This season was expected to be a battle between ITU World Champions Gomez and Brownlee and it almost materialised in Sydney before Brownlee slipped in the run on a rain soaked Sydney course, and it was his younger brother Jonathan Brownlee who went on to claim second behind the Spaniard.
Full live video coverage of the event can be found on www.triathlonlive.tv. Sign up today for a season’s pass and get all 14 magazine shows, plus each race live and on demand also. That’s over 80 hours of coverage.

But that simply means both have even more to race for in Madrid. Gomez is a multiple Madrid World Cup winner, but since the introduction of the Dextro Energy Triathlon Series he hasn’t been able to win the Spanish leg because Alistair Brownlee has dominated in Madrid. Gomez’s form in Sydney was stunning, he crashed on the bike, finished the last 10km by himself and then recorded the fastest run split of the day to catch and then overtake the pack. Afterwards the two-time ITU World Champion said it was one of the toughest wins of his career. But Alistair Brownlee will no doubt be keen to get some more points on the board after that unfortunate spill cost him in the season opener and he is currently the Madrid master.


It would be a mistake to ignore the Brownlee who is currently sitting second in the series rankings though. Last season Jonathan showed signs he might match his big brother’s impressive record, taking a podium place in London, the Under 23 World Championships and the inaugural ITU Sprint Triathlon World Championship. Another good result here could set him up for a breakthrough season in the Dextro Energy Triathlon ITU World Championship Series.

In the rest of the field, Courtney Atkinson (AUS) has claimed silver in both the 2009 and 2010 Madrid races, but don’t be surprised if rising star Brendan Sexton (AUS) turns out to be the Australian to watch. Sexton has been on fire in the beginning of 2011, with a silver in Mooloolaba, fourth in Sydney and then a win in Monterrey - his first World Cup gold.

Others to watch for include American veteran Hunter Kemper, who claimed his first World Cup win since 2005 in Ishigaki and backed that up with a bronze in Monterrey, Sydney Olympic gold medallist Simon Whitfield making his 2011 season debut and 2008 Olympic champion Jan Frodeno, who turned with the leaders in Sydnhey’s T2 but recorded a run split of 34:22 to finish 45th. Others who will be pushing for the top-10 are Sven Riederer (SUI), who finished third in Sydney, Frederic Belaubre (FRA), a Madrid World Cup winner who claimed his first World Cup medal since 2007 in Monterrey and Brad Kahlefeldt (AUS).

Also look out for the two newest World Cup medallists, Artem Parienko (RUS) and Marek Jaskolka (POL), who both climbed on to ITU podiums for the first time over the last two months. Jaskolka’s bronze was also an important part of ITU history - the first World Cup medal for Poland.

Javier Gomez:
On his hopes for Madrid
“The last two years were not good for me because of injuries, which is a part of the game. I’m happy right now with how things are going. My training is very good. The first race in Sydney was just fantastic, and I am leading the series right now. This is a tough one, but a special race because I am racing at home.”

On his competition
“I used to check the start list at races to see who are the big competitors. Now all of the best are in every race, so I don’t have to check. If I want to win here, I just have to go faster than everyone else. What I have to do here to win won’t be easy. I think Alistair will compete very well. I will have to run very fast. He is the toughest competitor I have ever had.”

The organisers thanked the city of Madrid and its citizens for their support in the race, as well as celebrated Spain’s many sporting events this year. Spain’s top athletes including Gomez, Ivan Rana and Murua were also in attendance to answer questions about their hopes for the race, as well as their future aspirations leading up the 2012 Olympic Games.


http://www.triathlon.org/news/article/top_stars_highlight_madrid_pre-race_press_conference/
.-.-.-.-.-.-.-.-.-.-
Brownlee double trouble as Alistair gets three-peat in Madrid

It’s the first time the Brownlee brothers have both medaled in a Dextro Energy Triathlon Series race, and it came on the back of an lightning quick run where they worked together to burn home favourite Javier Gomez. Alistair Brownlee said while he hadn’t quite been expecting it, he was happy it happened at the place where he collected his break through win three years ago.

“Yeah absolutely, I suppose it’s not been a while coming, but it had to happen sometime and why not have it happen in Madrid, a race where I have done really well in and such a fantastic course,” he said.

Alistair had opened up a break on his brother in the last kilometre, but stopped and waited and the pair put an arm around each other before Jonathan made sure Alistair crossed first. Jonathan said it had been a nice way to celebrate their first shared podium.
“The Brownlee’s were just on a different level on the run, so I couldn’t do too much. I tried on the first lap, I tried to follow them but I know that was not my pace, I was waiting to see if they would slow down, but they didn’t, they went faster and they smashed me.” Javier Gomez

Gomez came in third and is still yet to win his home event since it became part of the Dextro Energy Triathlon ITU World Championship Series, as Alistair Brownlee has beaten him to it in 2009, 2010 and now 2011, but he said he just couldn’t compete with the brothers on the day.

“We were the guys who worked the most on the bikes through the whole race, and they still ran the fastest. So they are just impressive, congratulations to them and I will just keep on working and try to beat them in the next one.”

Those three were always in the lead in a sunny day in Madrid, they exited the swim with the leaders and were then part of an initial 11-man break on the bike that pushed out to a 20second lead on the main group after the first lap.

But with Gomez, the Brownlees, James Elvery, Frederic Belaubre, Dmitry Polyansky, Alexander Brukhankov and Aurelien Raphael in that group, they kept pushing the pace. A small chase group with Ivan Raña, Hirokatsu Tayama and Jan Frodeno were just behind and just before halfway, reigning Olympic champion Frodeno caught the lead group to make it 12. Together, they continued to push out the laps quickly and entered T2 with an almost two-minute lead on the rest of the field.

It was always going to be almost impossible to catch that top group, and even more so when the Brownlee brothers and Gomez started to break away. Soon, even Gomez couldn’t catch up as the brothers hammered away on a torrid pace. Even as he stopped to wait for his brother, Alistair Brownlee’s run time was still a super quick 30 minutes 8 seconds.

Despite working together to pull off what seemed like a perfect plan, Jonathan said they hadn’t thought about it before.

“We were working together, but we didn’t plan from the start to do that, just during the race we talk a lot we talk about time gaps, we’ve got 50 seconds on it now, let’s just work, let’s work,” Jonathan said. “So we didn’t go in with a plan, it just developed.”

Overall, Gomez’s third place was enough to keep him in the lead of the Dextro Energy Triathlon ITU World Championship Series rankings with 1485 points compared to Jonathan Brownlee’s 1480 points. Polyanksy moves into third place in the overall rankings, with 983 points. Alistair Brownlee is in fifth, a jump of about 20 places after his 28th place finish in the first race of the year in Sydney.

Russia went fourth and fifth with Brukhankov and Polyansky while Frodeno finished up in sixth spot. He was followed by a pair of Frenchman, Belaubre and Raphael.