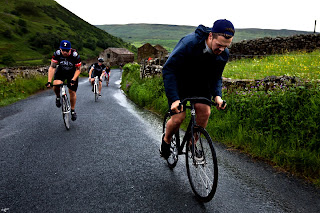 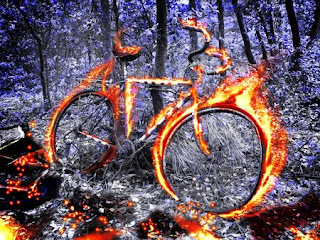 SOMEWHERE ONLY WE KNOW

Hell is a very personal experience. One man’s eternal damnation might well be another’s paradise. For me, writing as I am in the depths of a Yorkshire winter ,the traditional idea of the underworld with its rows of angry fires seems far more appealing than floating around on some wispy cloud with nothing but a halo and a smile of smug self-satisfaction.That said, there exist certain experiences in life which we can all agree are pretty hellish. These are things we endure on earth – as a challenge, punishment, necessity, but which rank pretty low down on the list of ventures we’d care to repeat. Carr Lane is one of them. Around 3/4 of a mile in length, it winds steeply upwards from the sooty streets of Shipley, deep at the bottom of the Aire Valley, to Wrose at the top.

This is one of Yorkshire’s forgotten hills. It is not as precipitous as Park Rash, lacks the distinction of Cragg Vale and the majesty of Buttertubs Pass; it doesn’t tower regally above green fields nor wind down to pretty villages. Instead, it is a brutal, urban climb right in the heart of one of England’s most brutal cities.This is doubtless the reason for its disregard. Carr Lane does not form the natural path of many cyclists who overwhelmingly seek to escape the thundering Bradford traffic to the relative tranquillity of the surrounding moors. And who can blame them?

It is not a pleasant route. Cycling in Bradford is semi-suicidal: unlicensed taxis speed past on narrow roads devoid of cycle paths and boxes, whilst the city centre spills inebriated old crones from its bars celebrating their last night out before the menopause by jaywalking and hurling abuse. Surviving the pitfalls of Bradford cycling is part of Carr Lane’s challenging character.

It’s uncouth, unpleasant, unrefined; a tough hill in a tough place.The hill itself drains into Shipley, a place of unforgiving sadness that shivers in the shadows of nearby plutocratic Leeds. The town itself has a long history, first being mentioned in the Domesday Book of 1086 as “Scipelei”; Old English for “sheep pasture”. Clearly, times have changed. As the town grew, the meadows and pastures became early mines, with gaping holes bored into the hillsides to extract the layers of coal that lay beneath. Coal brought with it the industrial revolution and Shipley shone at its centre as a hub of Victorian innovation and assiduity. Now, however, the palaces of industry – the mills and factories – lie abandoned, towering cowardly out from a sea of brutalist sixties architecture, betting shops and greasy spoons. This is not exactly a holiday destination.