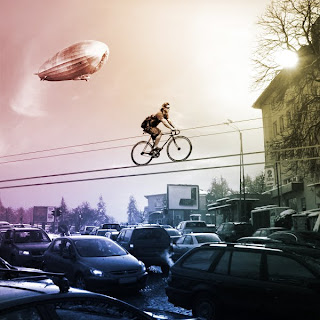 Kolelinia is a city fly attempt. We are born to move, this makes us alive. The transport is not only a transport, it has to be an experience! The quality of this process reflects directly on the quality of our life. Is it possible to achieve a completely new level of transportation with minimum resources?
Kolelinia is a concept for riding our own bikes on a steel wire, a new type of bicycle-lanes…

This doesn’t replace the normal biking, this only helps in problematic zones!
Could be a bridge type, a longer transportation line or a special designed and independent touristic line. Of course it is too early to talk about mass use. See the story of the project.

Everything started in the summer of 2008. I decided to participate in the international architectural competition „Line of Site” on the „City Transportation Interchange” brief. The first crazy idea which came to my mind was to make flying bicycle-lanes, using steel wire, something like ski lift but working on the opposite principle in which the wire is static and it doesn’t need electricity. Ultimately I sent only a pencil sketch and the idea placed for the final, which was held on February 2009 in London. My detailed presentation won the „City Transportation Interchange” brief. During the autumn of the same year I decided to develop the idea in further details. At the same time I received an invitation to become presenter for the Sofia’s TEDx conference, something that additionally stimulated the development of the idea. Many of the principles have been changed. For example the personal safety device, which is a prior-art itself. This site presents the third step of the development. Time only will show what will come out of it…