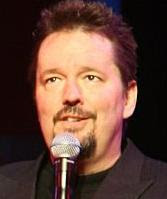 Terry Fator and his friends Julius and Duggie perform on the 2009 MDA Telethon from the Terry Fator Theatre at The Mirage in Las Vegas.

Terry Fator - What a Wonderful World

Terry Wayne Fator[3] (pronounced /ˈfeɪtər/; born June 10, 1965) is a ventriloquist, impressionist, comedian, and singer from Mesquite, Texas. Fator is capable of doing over 100 ventriloquial impersonations,[4] and uses 16 different puppets in his act. He was the winner of Season 2 of America's Got Talent, and received the million dollar prize.[5] The following year, he was signed on as the headliner at The Mirage hotel and casino in Las Vegas, Nevada.[6]
Contents
[hide]

Terry Fator was born on June 10, 1965 in Dallas, Texas, the son of Jephtha Wesley and Edith Marie (Clifton) Fator. He has an older brother, Jephtha Jr., and a younger sister, Deborah.[7] Fator's second cousin is Chris Sligh, an American Idol season 6 finalist.[4] Terry Fator says in his audio commentary of Terry Fator: Live from Las Vegas (2009) that he went to college at Liberty University in Lynchburg, Virginia. The beginning of Fator's ventriloquism career dates back to when he was in fifth grade.[4][8] While searching for a book for an assignment on Valentine's Day, he came across a book about ventriloquism[8] titled, Ventriloquism for Fun and Profit, by Paul Winchell.[9] Fator checked out the book and started learning about ventriloquism.[4] A few weeks later, Fator purchased a Willie Talk dummy from Sears[4] and soon won a $25 prize for a performance at a church picnic.[8][9]

Fator got his start touring as the lead singer of a band called "Freedom Jam" in 1987-88, produced by Young American Showcase. They performed at over 200 high schools and middle schools across the United States, averaging three performances per school day.

In mid 1988, he was the lead singer of a show band called 'Texas the Band'[11] when he was 20, and incorporated his puppet Walter T. Airedale into his shows. Fator's band at one point was about to sign with a major record label and one of the label's representatives came to hear the band. Fator sang the songs impersonating the original vocalists. "He told me 'you gotta stop doing those impressions,' and wanted me to sing in my own voice," Fator says. "I tried it for a few weeks, and absolutely hated it. We told the record company 'no thanks.'"[12]
Combining singing and ventriloquism

Fator left the band and did a solo act combining comedy and ventriloquism but for many years had little success. "Fairs would stick me on a little stage in the back of fair and have me do three shows in the hottest part of the afternoon," says Fator. "I had heat stroke a couple of times, almost passed out."

In May 2007, before appearing on America's Got Talent, Fator was performing at a fair near Houston, Texas and the only spectator was a 12 year old boy. Discouraged, Fator contemplated pursuing another career, but his family encouraged him to hang in there. Terry entered the America's Got Talent competition with the hope that the exposure if he made it to the Top 20 might help his career and cause people to want to attend his shows. But Fator says the low point of his career was when he appeared at a 1,000 seat theater and had only one customer.

Fator's success stems from combining singing and ventriloquism. Fator had been the lead singer in a band and often did impersonations of singers Garth Brooks, Etta James, James Taylor and Dean Martin while ventriloquism was just a comic side gig for Fator. In 2005 Fator decided to join his two talents, ventriloquism and impersonations. "I had one of my characters sing Garth Brooks' "Friends in Low Places" and the audience went bananas," Fator says. "Boy, that was where my life changed." After his initial success Fator revamped his act. "It took me six months and I completely rewrote the show," says Fator. "It was then that people really noticed and I started getting standing ovations at the end of every show."

Before appearing on America's Got Talent, Fator had almost given up on achieving success in show business as a ventriloquist. "It wasn't easy trying to keep going all these years, and by the time I was in my late 30s, I wasn't sure it was ever going to happen," says Fator.

On June 19, 2007, Fator made his first national appearance on America's Got Talent. Fator never dreamed that he would win the show. "Not in my wildest dreams did I imagine I would win that show," says Fator. "Essentially I auditioned because the guy that was the ventriloquist the first season got on Late Show with David Letterman... So I figured I'd do three episodes like he did and end up on 'David Letterman.'"[15] After winning the show, Fator actually had to turn the Letterman gig down four times before he could appear. "My schedule got so packed, and it broke my heart every time I had to turn him down," Fator says.

When Fator first came onstage, judge David Hasselhoff said, "Oh, no, a ventriloquist." "I was thinking, there's no way I would win," Fator says. "I gave myself zero percent [chance]." The judges, Piers Morgan, Sharon Osbourne and David Hasselhoff loved Fator and he won the competition.[8] Judge Piers Morgan told Fator "You’re a great impersonator, a great singer and a great comedian." "You put a twist on the whole being a ventriloquist thing," added Judge Sharon Osbourne.[16] Even Simon Cowell approved. "Simon Cowell said I was one of the top two entertainers on the planet," says Fator. "And getting a compliment from Simon Cowell, well, not many people get a compliment like that."[15]

After Fator won the $1 million prize, he bought his wife an expensive wedding ring and a dream house in Trophy Club, Texas near Dallas, Texas.[8]